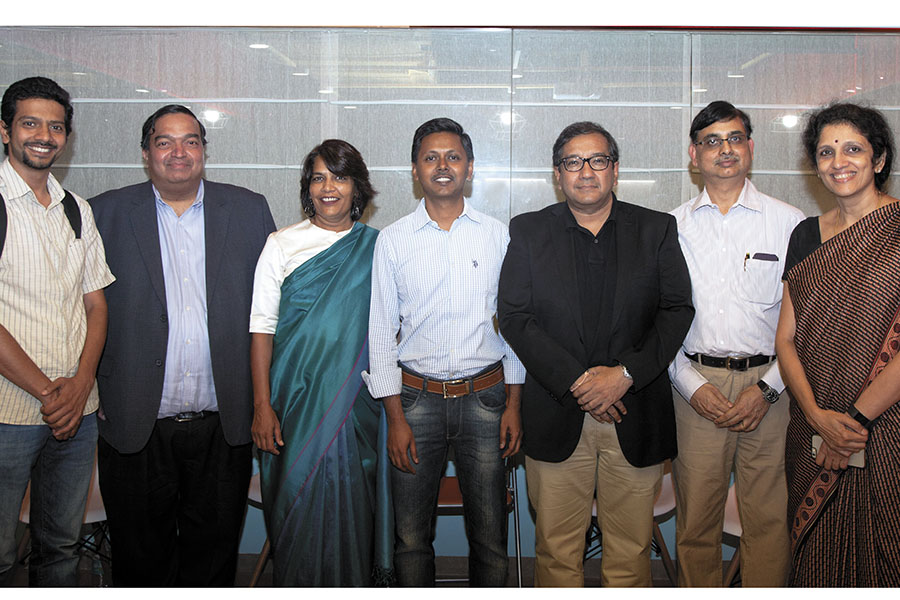 
Till about a year and a half ago, India’s startup ecosystem was on the upswing, particularly with respect to venture funding. That buzz seems to have mellowed now, as is evident from the “down rounds”. Flipkart’s biggest fund raise of $1.4 billion this April happened at a pre-money valuation of $10.2 billion as compared to the company’s earlier valuation of $15 billion.

While the trend is cyclical and true of all startup ecosystems, including the one in Silicon Valley, a waning period does bring in a sense of negativity. Which is why the topic for discussion at the second edition of Startup Square, organised by Forbes India in association with Axilor Ventures, was titled ‘Is India’s startup ecosystem finally getting real?’

Majumdar began the discussion with three questions that summarise the mood in the startup ecosystem: Are valuations getting more real? Are investors asking for a clear path to profit? And are we looking at more realistic ventures?

Said Bharati Jacob: “I think the startup ecosystem has always been real, it has always been in a growth phase and in the last 10 years it has grown tremendously. If you look at all the players in the ecosystem—entrepreneurs, advisors, venture funds—in all respects we have grown. Some have grown more than the others and it’s been uneven.”

Adding a touch of humour and drawing on a cricket analogy, Vijaya Kumar Ivaturi (who, along with Meena Ganesh and others, has co-authored The Manual for Indian Start-ups) said: “We have moved from T20s to [playing] ODIs. You need to play more death overs, so you better have something which keeps it [the startup] going.”

Ravi Gururaj, however, believes the macro trends are positive and India’s consumer story is ripe for picking. “Any entrepreneur out there looking to raise money will say it’s tough. [But] there’s mobility growth, middle-class growth, and just the aspirations of the government to grow India and invest in digital in various ways. I think the insatiable appetite of the Indian consumer is tremendous,” he said. Meena concurred. “Domestic consumerism: The surface of that has hardly been scratched. There are so many different business problems and social problems to be solved.”

Mekin Maheshwari, former chief people officer and head of engineering at Flipkart, plotted the challenging trajectory of startups over the past seven to eight years to define the checkboxes they have had to tick. “It [a startup] went from becoming acceptable to fashionable and now to difficult. And it should be difficult,” he said. The definition of starting-up, added Maheshwari, starts with an entrepreneur wanting to do something that impacts a fairly large number of people. “To do that you need to do a lot of things: You need to work hard, come up with ideas, and you need to be lucky.”

There are, however, fundamental challenges with respect to what entrepreneurs want to do. For example, Meena said, “Some of their problem definitions are so narrow that you wonder if they can actually build a full-fledged business with that small definition.” Bharati added, “I don’t see an entrepreneur come in and say this is the problem that I’m going to solve. It’s always about this is the platform or this is the technology I have, and my question is so what?”

On a more positive note, Ganapathy Venugopal spoke of an “important change” he has seen through Axilor’s accelerator programme: A rise in the number of founders with previous startup experience. “That is extremely encouraging.” The fact that these entrepreneurs have hired teams, fired people, been through the ups and downs, “make a big difference to how serious they are about what they are doing”, says Venugopal.

B2C vs B2B
Venugopal said the number of enterprise startups founded in India in 2016 almost matched their number in the US. These numbers, he says, would have been difficult even three to four years ago, when consumer internet was the flavour. Now, among Axilor’s summer 2017 batch of 20 startups, less than six are focussed on the consumer space, he said. Most are focussed on enterprise. “The kind of problems they are solving are deep enough and the kind of customers they are selling to are very different,” he said.

Of these, almost half are looking at the global markets. “To build a business of scale in the B2B space, just on the basis of an Indian customer, is tough. Most of us have to go outside to get a better balance of revenue and profit,” said Ivaturi, whose big data analytics startup Crayon Data is based out of Singapore. “It’s very hard to build the same scale out of India on those enterprise plays today. You have to tap into the US market, where the early adopters of the enterprise technologies are,” added Gururaj.

On the point of B2C, Gururaj pointed to India’s 1.4 billion population. “Even if you take the middle class—and however you define it—it’s still more than Europe. Why wouldn’t you do B2C?” he asked. “If you sit out the B2C space now because in the rearview mirror you see there is so much carnage, you are going to miss out big time.”

Given this B2C opportunity, the level of Indianisation to address the country’s population is woefully low. “So far, the shots have been aimed at the top 100 million and we haven’t figured out ways of serving people below that,” said Maheshwari. That, of course, was not his reason to given up a storied career at Flipkart and start Udhyam, a social enterprise with a focus on grassroot entrepreneurship and entrepreneurial skill development. “What made me start a social venture is the search for myself. I believe and hope that I will find more meaning in what I’m doing now. I loved what I did at Flipkart,” said Maheshwari.

For Bharati, whose venture fund Seedfund made a successful exit from redBus in 2013, India’s consumption story has been her investment philosophy for the last 10 years. But as the consumption story plays out and startups get more ambitious, Majumdar wondered if at some point startups could actually become big enough to challenge the BSE 200 or BSE 500 stack of companies? “Yes, that’s the hope that we are living on,” said Bharati. “In many ways Biocon did that. It started in an era when there wasn’t much venture funding, but it is a company that has taken on the biggies overseas.”

Mentorship: Boon or Bane
A key pillar to any startup ecosystem are mentors, who are typically entrepreneurs who have been there and done that. In India, though, there seems to be a shortage of real mentors and, as Gururaj said, a problem of “too many armchair mentors”.

Ivaturi, a mentor himself at multiple startup accelerators, thinks that most of the mentoring that startups receive is specific to certain aspects of their business. “Mentors will fix a startup’s go-to-market problem, but very few can give a holistic view,” he said.

There are also serious concerns about the presence of too many mentors without the right acumen. “I have seen many startups going down the wrong path because the mentors have literally driven them to do something which is not right,” says Meena. “While we all want lots of mentors, there has to be some way to be sure that people are qualified to be mentors. They may have fantastic experience in whatever roles they perform in big companies and so on, but can they tell you how to build a business?”

Meena, who is on the board of governors of IIM-Calcutta, believes management institutes across the country are ushering in a positive movement with regard to mentorship and incubation of startups. “Many of the IIMs are working hard to build an environment where entrepreneurs can set up a business, get mentored and funded.”

Yet, the institutional capacity that is available in India to support startups at the very early stages is still very low. “We never anticipated something like this [the startup ecosystem] to become such a large revolution in the last three to four years,” Venugopal said.

Calling the shots
There are examples of how investors are taking charge and running startups to seek a path of profitability. “Is that going to be a trend?” asked Majumdar.

“We can’t take two or four incidents over the last 12 to 18 months and then extrapolate it for all startups,” said Bharati. But she categorically stated that if entrepreneurs don’t perform and when money is at stake, investors will step in and take control. “What is entrepreneurial performance? It is to say I will create a valuable company which will eventually list in the stock market or get acquired and everybody at the table makes money. That’s really the path that everybody wants to walk and I feel that at some point if entrepreneurs don’t do it, investors will take over,” she added.

Meena, on the other hand, believes that investors and entrepreneurs should think of each other as partners. “It’s not ‘you’ versus ‘me’. At the end of the day, if the business does well, everybody wins,” she said.

Drawing on his experience in starting and funding companies, Gururaj said no investor he has met wants to operate a company. “Generally, investors want to own a certain percentage [typically 15 percent] in a company. As an entrepreneur, you are best recognising that and try to maximise the cash that comes in for operations,” he said. But things do get messy.