The BSE 30 is under threat: IDG Ventures' Sudhir Sethi

Sudhir Sethi, founder and chairman of IDG Ventures India, on how innovation and technology are changing the entrepreneurial ecosystem in India and why new-tech companies are the gamechangers 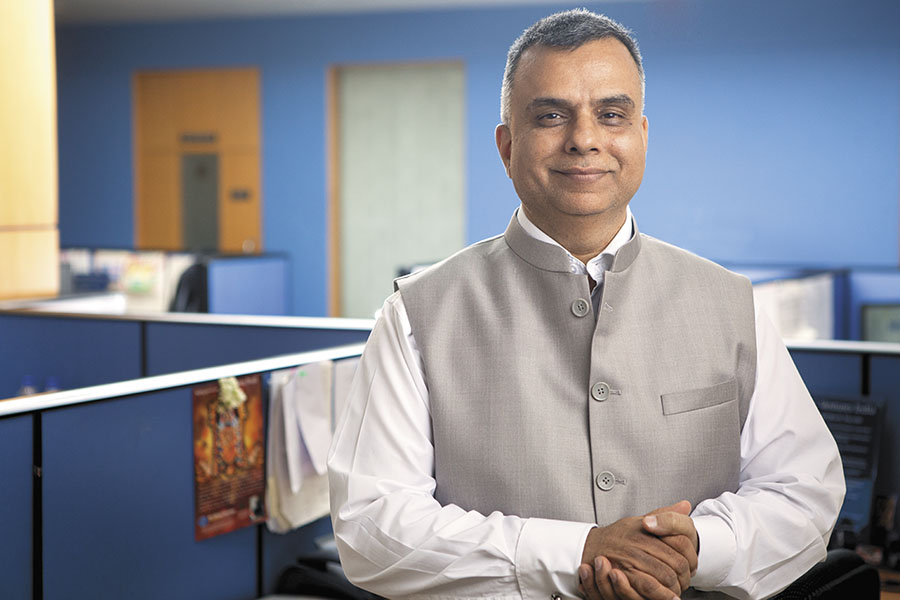 India-focussed technology venture capital fund IDG Ventures India has raised about Rs 2,600 crore over the last 10 years of which it has invested about Rs 1,700 crore in a slew of Indian startups. To date, the fund has exited from 13 startups that it had invested in, including Myntra, Lenskart, Hiree and Manthan.

Sudhir Sethi, 58, founder and chairman of IDG Ventures India, tells Forbes India that he’s now betting big on “deep-tech” startups. “We are investing in technologies which will be relevant 5-7 years down the line,” he says. In a freewheeling chat, Sethi, who was a part of the launch team of HCL’s and subsequently Wipro’s computer division, shares his views on the Indian startup ecosystem, high valuations of startups and what excites him about Indian innovation. Edited excerpts:

Q. IDG Ventures India (along with Axilor Ventures) launched a Frontier Tech Innovators Programme, which would invest in and partner with new-age disruptive startups. What was the need for such a programme?
The Frontier Tech programme is interesting. We saw innovations over the years, not in a wave, but in pieces. We saw them in software and medical devices. The thought of Frontier Tech came to our minds in the last three months of 2016. In India, robotics will improve and other technology will come in as well. We got in touch with TeamIndus as we loved their audacious approach to land a rover on the moon. That’s what innovation and entrepreneurship is all about. We continue to talk to them (we have not invested in them as yet). When I think of technology, I think of Artificial Intelligence (AI), virtual reality, machine language, robotics, defence/space, so we thought we will look for these companies through the Frontier Tech programme. Our internal name for the programme is ‘hatke’ technologies. In three weeks (between March and April), we saw about 455 companies. Many of them are under evaluation; we will go through the process and hopefully invest in a few of them.

What excites us about India is innovation, deep technology, the ability of an entrepreneur to take risks and also the high quality of entrepreneurs. I have been investing in India since 1998 and these four things haven’t changed. In fact, they have accelerated. If I look at our first investment under the IDG banner, it was a software company called Manthan Software Services, which was into analytics for the retail sector. We invested in 2007 from our first fund and we exited fully in 2014 with a handsome return. In 2008, we invested in Perfint, which was into medical robotics. It’s the first medical device company from India to get FDA approval in China (the only company I know of to have achieved that), USA as well as in 12 other countries. We are still invested in them. We have also invested in a company called Forus Health, which is in the space of ophthalmology device, which enables retina scans. They have done over a million scans so far.

Q. How different are these companies, which you are looking at through the programme, to your portfolio of investments so far?
They are very different. We have 62 companies under our portfolio of which 50 are active. The portfolio is a mix of internet, media, ecommerce, software, health care and financial technology startups.

That said, we believe that the exit timeframes, which used to be many years, have now come down. We are able to now sell a very high-tech company in two years in India. In the last two-and-a-half years, we sold Pluss [hyperlocal medicine delivery startup] to Netmeds.com, Hiree [online recruitment firm] to Quikr; we have just completed the sale of Zimmber to Quikr and we sold Momoe [mobile payments app] to ShopClues. In two-and-a-half years, from the date of investment, the companies got sold. Fundamentally, these companies were not bought for scale, but for technology which the buyer didn’t have. So, we have seen that buyers from India are recognising technology and the missing product gap in their own product profile and are willing to buy. That never happened before. There’s a shift that has happened in the market, which is anecdotal in nature, and not planned for by us. Investors like us want to be ahead of the curve and by doing so, our investments can get more returns.

Q. Could you elaborate on how ‘exit timeframes’ have come down?
If I look at the last 10 years, the exit cycles are reducing. In Myntra and Manthan Software Services, our exit cycle was seven years. We just exited Fintellix and I think that was five years. If we look at some of the exits which are in process, they would be after 5-8 years. As India scales, I think exit timeframes would reduce even more. It would be about 5-6 years as we move forward, which is very healthy. By design, our exit valuations are between $100 million and $500 million. We don’t have too many unicorns to have exits at billion-dollar valuations. If we want our investments to work, we can’t wait for a billion-dollar valuation to happen in all cases. Those would be exceptions; those also need a lot of luck.

Q. Speaking of unicorns, are some in India seeing a correction in their valuations?
From a capital supply point of view, last year, the total private equity/venture capital funding in the country was about $12 billion. It was $17-18 billion the year before and $10-11 billion in its preceding year. Broadly, India has been absorbing private equity/venture capital funding of around $10 billion, plus or minus. In the middle, a few years ago, it spiked to $17-18 billion a year. It was basically funds which came in once and went out that caused the spike. Traditional investors have always kept the investment flow in the $10-11 billion bracket. The spike happened because a large amount of capital was running after a few companies. Now, that is not happening; only the normal amount is running after a few companies. And to that extent, valuations have come down, which I think is healthy for the startup ecosystem.

The maturity of the startup ecosystem is enormous today. In the internet space, there are about 70-odd million people who buy and sell products on the web. In the next five years, we are looking at 300 million [shopping on the internet]. If at 70 million we can have a Flipkart, FirstCry and Lenskart, imagine what can happen at 300 million. I truly believe that BSE 30 is under threat. The new-tech companies are value builders at a very large scale.

Q. IDG was one of the early investors to back Myntra. What were the learnings from that investment?
I think Mukesh [Bansal, founder of Myntra] is an entrepreneur par excellence. There is no question about it. He is definitely one of the people we learn from enormously. Mukesh is a role model for many. When we first invested in Myntra, the company was not an online fashion retailer. It was a personalised gifting company. In October 2008, its revenue was Rs 12 lakh. Within 12-18 months of our investment, we found that the gifting paradigm was no longer valid. So, the company had to change its business model. Mukesh was able to pivot the company into fashion, raise more capital and made Myntra into a gamechanging company, which is a leader in its space. When the company was sold to Flipkart, it had a $100 million run rate a year. That is, he scaled the company from a run rate of Rs 1.5 crore to over Rs 600 crore in a timeframe of six years. Then he merged the company with Flipkart. And when he left Flipkart, he was handling a revenue scale of $1 billion. He is the only entrepreneur I know from my portfolio who has scaled from Rs 1.5 crore to $1 billion in eight years. Other people who have done this are Sachin Bansal and Binny Bansal. Scaling is complex; it requires a good team, technology and capital. Post Flipkart, when Mukesh decided to start Curefit, for me, it was like: ‘OK, we are on’.

Tweets by @forbesindia
Basketball can be India's No 2 sport after cricket: Yannick Colaco
Google's Daydream View VR headset goes on sale in India on Flipkart