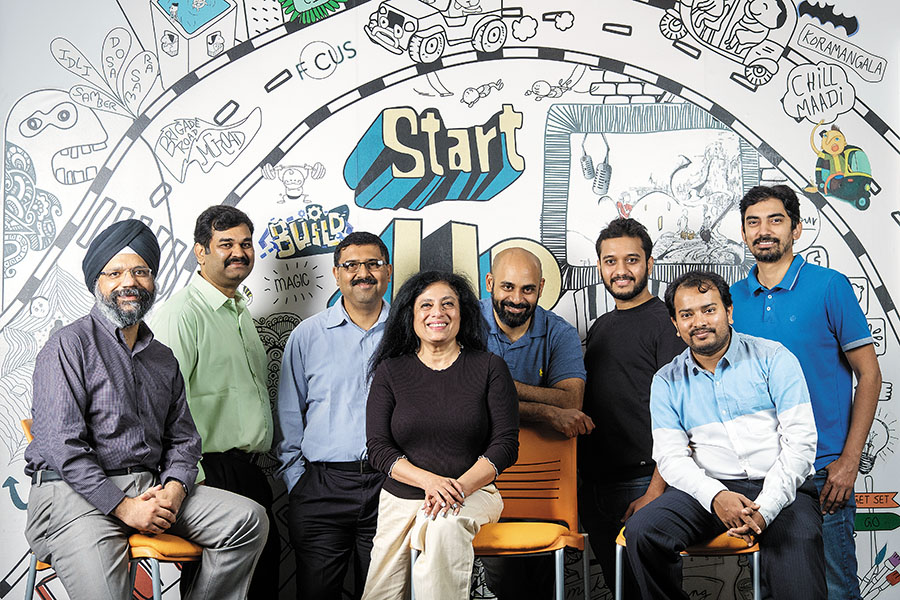 Last year proved to be a momentous one for Neewee, a four-year-old startup based out of Bengaluru’s IT hub of Whitefield, which develops industrial analytics software for the manufacturing industry. Co-founded by Harsimrat Bhasin, 47, it was selected to be a part of Airbus BizLab India, the business accelerator of the €60-billion aircraft manufacturer Airbus.

Based in Bengaluru, Airbus BizLab India was launched in January 2016. It offers a six-month accelerator programme through which startups get access to free office space, dedicated coaches to handhold them as well as access to a pool of mentors and experts from within Airbus, and outside the company, to help them with industry knowhow. This was Airbus BizLab’s third facility—the first two were in Toulouse, France (2015) and Hamburg, Germany (2015)—and the only one outside Europe, the home turf of Airbus. A fourth centre was recently inaugurated in Madrid, Spain.

“Before coming to BizLab, we had done a few pilots [projects],” says Bhasin, who is also the chief operating officer of Neewee. Little did he know that the six-month stint with BizLab in 2017, would prove to be the turning point in the startup’s journey. The European aerospace major eventually became his firm’s biggest client. Neewee’s software product helps manufacturing companies increase cost efficiencies across the supply chain, improve on delivery rates and reduce quality issues.

“Roughly, each [Airbus] aircraft has about 4 million parts, which means several suppliers across the globe,” says Siddharth Balachandran, leader, Airbus BizLab India. “With a supply chain analytics startup like Neewee, we saw there could be a requirement from our procurement team and hence brought them on board.”

During the programme in Bengaluru, two employees of Airbus India’s procurement team mentored team Neewee and helped in piloting the company’s software with a tier 1 supplier of Airbus. Following the successful completion of that pilot project, Neewee has now deployed its industrial analytics software at an Airbus manufacturing facility in Hamburg. “The [accelerator] programme gave us access to a client like Airbus. That kind of validation has opened the doors to other clients,” says Bhasin.
Similarly, three other startups from the accelerator programme have gone on to sign partnerships with various affiliate companies of Airbus. Besides, a two-member team from Airbus India’s engineering division in Bengaluru is in the process of setting up its own startup. This comes in the wake of an idea for creating a consumer product for flyers being finetuned at Airbus BizLab India. Over the last two years, the business accelerator has mentored 16 startups.
Balachandran, who joined Airbus BizLab India in mid-2016, believes it’s the accelerator’s job to identify technology startups and connect them to the right teams within Airbus. “I’m sure a lot of founders have previously tried to reach out to different teams in Airbus. But finding the right person and the right team from outside is a challenge,” he says.

Stelae Technologies, part of the same batch as Neewee for the programme, signed a partnership with Navblue, a wholly-owned Airbus subsidiary in July. Navblue is an integrated flight operations and air traffic management services company. The Chennai-headquartered Stelae is helping it in its digital transformation drive.

Co-founded by Aruna Schwarz, 55, in 2007, Stelae is an enterprise software product company that transforms unstructured documents (like PDFs) to structured, searchable and analysable outputs like Json (for big data), S1000d and ATA (for the aerospace and defence sectors) and DITA (for manufacturing). Though it has the Indian Air Force as a client, getting accepted by Airbus BizLab India was critical to the company. “Mentoring and coaching were less important for us. It was about getting Airbus as a customer,” admits Schwarz. For any small company or startup, trying to get a foothold into Airbus, adds Schwarz, could take 50 years. “This [Airbus BizLab] really hastened that,” she says.

Like Stelae, Eflight, a three-year-old Bengaluru-based startup, was also focussed on having Airbus as a partner. “We knew we needed a branded global company [as a partner/client] for us to expand. As a startup, the brand factor is always a question mark,” says Prem Kumar, 42, co-founder and business development head of Eflight, which was incorporated in 2015.

With its web-based, cloud software application, the startup has digitised the flight planning process—filing of departure time, the aircraft’s speed and altitude—for pilots operating chartered flights. It also provides trip support services such as ordering fuel and booking hotel rooms. 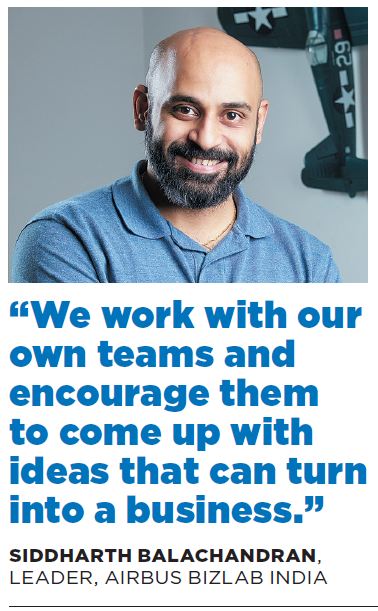 Over the last three years, Eflight has handled around 75,000 chartered flights and has been generating revenues. And just as Kumar had hoped for, after graduating from Airbus BizLab India, Eflight became the official India reseller of Navblue’s aeronautical charts—airport maps and terminal charts.

It is also helping Navblue develop aeronautical charts for smaller airports in India; approximately 50 airports in India, such as Hosur (Tamil Nadu) and the Jindal Vijaynagar Airport or Vidyanagar Airport (Karnataka), don’t have aeronautical maps. With this partnership, Navblue intends to build its presence in India where rival Jeppesen, a Boeing company, has an overwhelming dominance. “Navblue now wants to disrupt that,” says Kumar.

Typically, Airbus BizLab does not work with very early-stage startups. It looks for those companies that already have a product out in the market or have a ready prototype. That said, Airbus BizLab likes to call itself a hybrid accelerator. “We don’t work only with startups; we also work with our internal teams and encourage them to come up with innovative ideas that we can transform into a viable business,” explains Balachandran.

Such encouragement has borne results. Sometime in 2016, Soham Narayan Patel, 32, and Pradipta Kishore Sahoo, 37, both engineers at Airbus India in Bengaluru, discussed the pain points of economy class flyers over a cup of tea in office. “On long-haul fights, after three hours or so, you start getting back pain and leg pain as the economy seats aren’t good enough for sleeping,” says Patel. His chat with Sahoo was about how they could modify the seat and make it more comfortable. They sketched an ergonomically designed seat and sent their idea to Airbus BizLab India. While the idea was welcomed, the seat could not be developed in quick time. 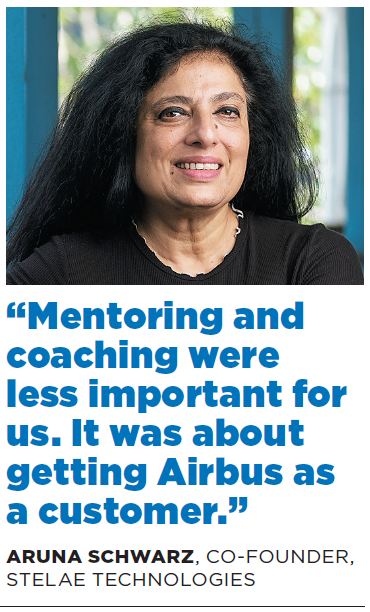 “We found out that the certification of an aircraft seat would take at least two years. So we pivoted from modifying a seat to designing a comfort kit, which a traveller can carry as hand luggage,” says Patel. The comfort kit, adds Patel, would make it easy for economy class travellers to sleep in different postures. Weighing under 700 grams and about the size of a 15-inch laptop, the foam-based product is under patent filing. “There is potential. And since it [the product] has a bigger [addressable] market, we are helping this team spin out and form a startup of its own,” says Balachandran.

Airbus BizLab India does not only consider startups in the aerospace sector. “What we need is a technology solution or product that can help any of our teams [within Airbus] do their job better or that can be adapted for our sector,” adds Balachandran.

Airpix, a five-year-old 3D drone data analytics startup, recently signed a go-to market partnership with Airbus Aerial, an imagery services subsidiary of Airbus, for the India market. Founded in 2013, Airpix has aggregated a pool of drone pilots across India who capture images (still, video as well as thermal), all of which are then analysed for different purposes across various industries. For example, with the help of drone imagery, Airpix carries out blade inspections of wind turbines.

To date, Airpix has undertaken 200 projects for 70 customers, a majority of them being government projects. For the Indian Railways, it periodically captures images on the progress of the laying of rail tracks across the country. On an average, Airpix captures and analyses data for projects that spread across 10 and 100 square kilometres. Now, Airpix is thinking big: Analysing data of projects that are 1,000 square kilometres and more. “In order to acquire a largescale project, we need certain credibility and partnering with a company like Airbus does that,” says Neeraj Waghchaure, 27, co-founder, Airpix. Airbus Aerial, which itself collects, analyses and distributes high-resolution satellite images as actionable data, now gets an entry into the India market through Airpix.

“For the last couple of years, I have been convinced with the potential and quality of entrepreneurs in India,” said Bruno Gutierres, global head, Airbus BizLab, while announcing some of the India partnerships in July. “I am pleased to see that all these partnerships between Airbus and Indian startups are proving me right.”

The next accelerator programme at Airbus BizLab India starts in October for which the selection of startups is under way. Airbus shortlists 20 startups from its pool of applicants and invites them for a two-day boot camp. Once that’s over, a jury comprising senior Airbus management picks the top five or six to be a part of the programme.  “For Airbus, the core focus through BizLab isn’t revenue. Our focus is on innovation and new technologies and how they can help revolutionise the way we do things,” says Balachandaran.