Made in India: Could the popularity of homegrown apps be temporary?

The ban on Chinese apps has proven to be beneficial to Indian alternatives. But to remain competitive in the long run, experts say app makers need to fix quality concerns and ensure regular upgrades for better user experience 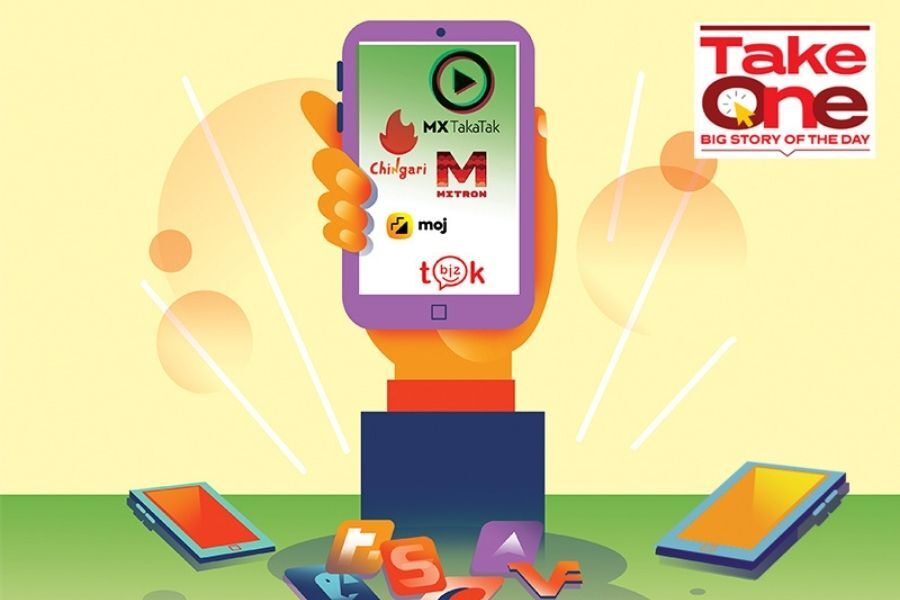 Like most people his age, Shaurya Sharma, 25, from Ludhiana is glued to his phone throughout the day. “I don’t think anyone would shy away from saying that they’re constantly on their phones… and social media takes up a better part of our time,” says says Sharma who runs his family transport business. Today, the world spends more than 10 billion hours per day using social media, which equates to more than one million years of human existence, according to the Digital 2020 October Global Statshot Report by Hootsuite and We Are Social.

Sharma was an avid TikTok user before it was banned on June 29, 2020, along with a slew of other Chinese apps following skirmishes at the border. “I was introduced to the short video platform in 2016 and was actively using it till it was banned. Then I switched to Indian alternatives such as Mitron, Chingari and Roposo to name a few that offer regional content and are like TikTok in many ways. It’s great to see so many Indian applications offering content that is at par with their mainstream alternatives. If you have to spend time on apps, why not let those be Indian?” he says. The Indian social media landscape has long evolved, with Facebook and Instagram still taking up the chunk of the Indian user base. India has the largest number of Facebook users (300 million), as of 2020. And, according to a report published by SimilarWeb, Facebook leads the monthly active user count, closely followed by ShareChat, a Bengaluru-based social media platform—one of the many desi apps Indians have warmed up to in recent times.

Indians have been trying to make it big on the social media landscape for years, but have always been judged against international giants that dominated the market in the country as well as globally. But there are winds of change. "It is said that no social media platform can be popular in India if it is not already popular in the US or China. However, that has changed in the past few years,” says Shivank Agarwal, founder and CEO of Mitron. An increase in the number of people who can afford technology and the government's Aatmanirbhar Bharat initiative have resulted in a rapid growth in the number of homegrown apps and those looking for relatable content. The ban on Chinese apps has proved to be a blessing in disguise as well, making the market one of the most saturated battlegrounds in India.  Since the increased focus on everything Indian, there has been a rise in the number of Indian startups across fields. For every startup that was heavily funded in the US, around 50 me-too startups came up in India in 2020, vying for investors’ attention, according to Tracxn, an analytics firm that tracks startups. The rise in the user base of homegrown apps stems from the fact that they are ‘Indian’.  These apps brand themselves with the 'Made in India' tag on Google Play Store. For instance, there’s ‘ShareChat–Made in India’ along with the phrase “100% Indian” on the second image in the image carousel. Mx Takatak and Moj are titled ‘Snack on Indian Short Videos | Made in India’, while Mitron calls itself ‘Mitron – India’s Original Short Video App | Indian’ and TokBiz as ‘TokBiz – first Indian social media App’.  Here are some Indian apps that have amassed huge popularity in recent times:   ShareChat

One of India’s pioneering vernacular platforms, ShareChat—launched in 2016—has successfully created a place for itself on the social media landscape in the country. It has done so by doubling down on vernacular content and providing a platform for people who like to interact with their communities in a language that they feel most comfortable with. “Our founders (Ankush Sachdeva, Farid Ahsan and Bhanu Pratap Singh) realised that there was a need for a content ecosystem in a language other than Hindi or English. People in rural India desire a space where they can easily communicate in their language,” says Berges Y Malu, director, ShareChat, explaining the problem that the app aimed to solve. Most of ShareChat’s users converse in Tamil, Telugu, Malayalam and Kannada. Malu credits the app’s success to the lack of political content on the platform. Instead of being an alternative to industry giants like WhatsApp or Facebook, ShareChat positions itself as a complementary platform that facilitates quick and easy sharing to other platforms that their consumers may use, including WhatsApp. As of November 2020, ShareChat crossed 160 million monthly active users speaking 15 Indian languages, according to a company report.
Moj  ShareChat’s Moj is one of the many applications that emerged following the ban on Chinese apps last June. Conceptualised and built in just 30 hours, Moj aims to capitalise on the gap left by TikTok in the short-video market. Along with Mx TakaTak and Josh—other similar short-video platforms—Moj was one of the most downloaded applications on Google Play Store in Q3 2020. As of February 3, Moj has surpassed over 100 million downloads in just seven months. It’s a milestone many apps struggle to touch in their lifetime.  Moj has over 80 million active monthly users. One of them is content creator Prateek Bhardwaj, who claims to have gained over a million followers in just three months due to Moj’s wide reach and quick response rates. The app, like TikTok, supports the use of creative filters, effects, animations and licensed music and content, making it popular among the youth.   Mx TakaTak

Mx TakaTak, the short-video arm of streaming platform MX Player, is another app that has benefited from the ban on Chinese apps. “It was right after the ban that the team worked day and night, and rolled out the app within six days,” says Karan Bedi, CEO, MX Player. “We had been planning on extending to a short-video platform for long, but it was the ban that finally made us capitalise on it.”  “While being Indian could be a good marketing technique, the success of an app depends on a lot more beyond that. By the time we entered the market, everything was Indian, so to stand out, we worked towards creating a seamless user experience that lacked in our competitors’ apps,” says Bedi. He claims that of the top 1,000 Indian creators on TikTok, 700 now depend on TakaTak that also offers support in regional languages, including Gujarati, Marathi and Punjabi.  TokBiz  TokBiz founder Pankaj Salunkhe had a vision of creating something Indian and inclusive. Though launched in 2017, work on the app started in 2015. “We’ve built an app that eases the social media experience for people who face problems with other apps,” says Salunkhe. The app with over 187,000 users is an amalgamation of the features of WhatsApp, Facebook and OLX. “It was hard to get investors… all the companies we approached looked down on us for being Indian and trying to develop a social media application,” adds Salunkhe, who built the app with 10 others. “We had a small team and lacked support from investors, so conceptualising and building the application took long… however, today, it is well-received by people comfortable in their mother tongue.” Being a hyperlocal app is one of the primary reasons for its success. Salunkhe says because of the Chinese app ban, traffic on TokBiz has increased manifold. “After the ban on Chinese apps, there was a massive surge in users on the platform. We’re still relatively young in the market and the massive inflow now calls for enhancing the server to demand, which we’re working on,” he adds.   Mitron

Launched in April 2020, Mitron has positioned itself as India’s go-to short-video content platform. Founder and CEO Shivank Agarwal says the rise in internet penetration in India resulted in the mobile revolution in the country, and in the wake of this revolution, there was a growing need for platforms that prioritised mobile usage. “We combined video with the mobile computing device to create Mitron, a mobile- and video-first social media platform.” As of February 3, Mitron has seen 10 million downloads on the Google Play Store. Shortly after its launch, to address consumers’ need to use and support more homegrown apps, Mitron launched an application called Atmanirbhar Apps that listed all India-based apps. This platform was downloaded over a lakh times in the first 15 days of the launch. “We want our users to know that if they have talent that they wish to display, we have Mitron… and if you wish to create another application, we have Atmanirbhar Apps, to be your guide,” says Agarwal. Atmanirbhar Apps  Atmanirbhar Apps is one of several applications online that has emerged as a direct result of growing nationalism among internet users in India. This platform lists applications across sectors such as health care, security, utility and entertainment, among others. Some of these apps include PMO India, Ludo King, TVFPlay, Jiva Health App and Aarogya Setu. Many of the above-mentioned apps were popular even before the Aatmanirbhar Bharat mission took shape. However, they too have changed their messaging strategy to emphasise the Indian-ness of their platforms, and appeal to nationalist sentiments.
The Anti-China Wave 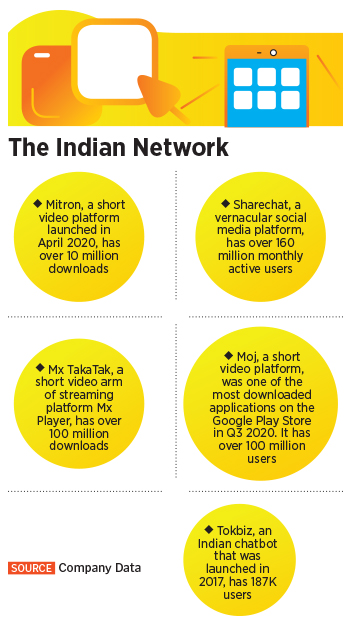 The growing discontent against anything related to China following tensions at the border have helped homegrown apps in multiple ways. The Aatmanirbhar Bharat initiative not only aided the growth of local platforms, but also strengthened the anti-China discourse in India. "In the last few months of TikTok being active in India, all we heard about the app was that it was Chinese and had privacy issues. A few of my friends even uninstalled the app along with other Chinese ones well before the government ban," says Sharma. The anti-China sentiments also led to the creation of multiple applications that claimed to detect and delete any application of Chinese origin from the users’ phones. Some of these applications included Chinese App Detector, Remove China Apps, Detect Chinese Apps and China Apps Scanner, many of which were eventually taken down by Google Play Store. The popularity of homegrown apps, believe experts, will only be temporary if they ignore quality concerns and don’t better user experience continuously. “If you are blindly copying TikTok or any other application, you are bound to be redundant in the future. But if you have managed to carve your own niche within the Indian market, your platform will be unfazed, ban or not,” says Mitron’s Agarwal.