The majors are poised for a great 2014. But who will lead? 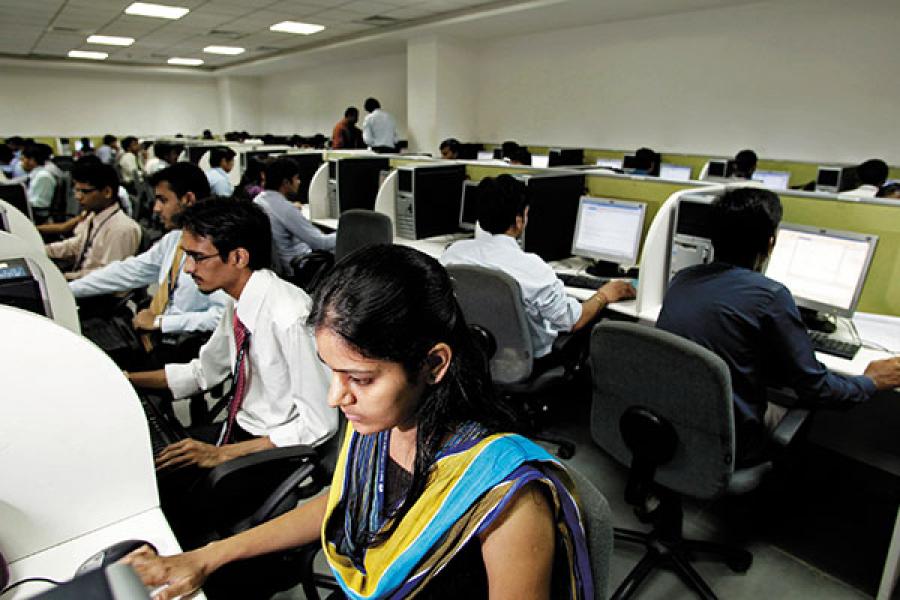 IT services are growing at barely 4 percent globally. So when we look at the double-digit growth of the Indian majors, they’re not just exploiting new areas of business, they are also winning business away from the Western incumbent providers.

We expect to see this trend continue into 2014, with the potential of some major upsets as these firms continue to win some important deals. The Global 2000 already outsources much of its administrative IT. Many of these firms are now allocating more business to Indian services providers for two reasons. One, India has developed a stellar brand as an IT services economy, so most major global enterprises like to use Indian firms in some capacity for their IT support. And two, most of the major Indian IT services firms are no longer being pigeon-holed as the outsourced providers of low-value administrative work.  They are maturing and proving capable of taking on higher value work, such as analytics, cloud and mobility services.

As a result, Indian majors are now competing aggressively for the more complex IT services work, contracts that used to go predominantly to the likes of IBM, Deloitte, HP, NTT, CGI-Logica, CSC and Accenture.

Many clients prefer the flexibility, work ethic, innovation and cost-friendliness that Indian firms have displayed to the stagnating services of many of the Western incumbents (many of which will continue to lose market share in 2014).

We expect to see this trend continue into 2014. We don’t expect any seismic occurrences—like the Satyam implosion—but we also see the emergence of new power brokers of the IT services industry.

We expect to see the continued emergence of HCL as a significant player. It is showing tenacity and determination reminiscent of Cognizant during its rapid rise after the recession. HCL is attacking the market with strong engineering and infrastructure prowess, as opposed to the sameish array of support and testing we are seeing from the leaders, and is also looking to aggressively grow its business process and analytics capabilities, which will be critical when it looks to steal away business from its Indian neighbours and incumbent providers.

From the other contenders, we predict another strong year for TCS, as the firm pushes its successful brand of IT and business process solutions into specific verticals, notably insurance and banking. As it moves beyond the offshore-centric deals for which it has become famous, it is also demonstrating the capability to take on the likes of IBM and Accenture in some really large enterprise deals.

Cognizant has had an incredible run as it multiplied its revenues from $1 billion to $6 billion in just a few short years, and it surely needs a period of calmer consolidation as it contends with its new-found size and scale. What worked going from $1 billion to $6 billion may not be what it needs to grow from $6 billion to 10 billion. While the firm has taken command of the application services and internet services areas, to tackle TCS it will need to get really focussed on BPO, analytics and Cloud. It also needs to cast a watchful eye at the aggressive moves from HCL.

Wipro has impressed in 2013, as it emerges from its transition years, and we expect it to have a solid 2014, leading with both its IT services and BPO capabilities. Its recent acquisition of Opus CMC demonstrates the firm’s determination to lead with industry-specific solutions in high-growth markets, such as banking and health care. Moreover, its client delivery performance in analytics services, where it leads the industry in execution, sets it on firm ground, and we expect it to challenge aggressively next year, as it focuses on business process-led opportunities to complement its traditional IT services and consulting business.

Infosys probably has the toughest challenge in 2014: To bounce back from its recent difficulties with executive turnover and rediscovering its focus. However, the successful transition of Lodestone has really helped the firm’s infrastructure capabilities and its targeting of Global 2000 enterprises has started to bear fruit of late, with a couple of healthy quarters. We are also seeing positive trajectory in discrete business process areas, where the firm is performing well with analytics. 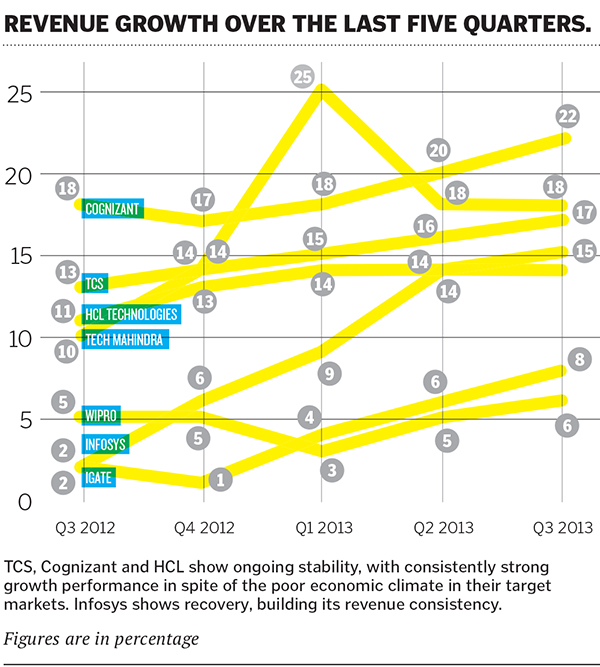 Future stars
Who else should one watch out for?

Tech Mahindra has shown it is finally ready to compete for significant enterprise IT services engagements, after the painful and lengthy ingestion of Satyam. Its competency in telecom and BFSI are showing strong signs of leading its growth charge.  However, its lack of focus in BPO could hold it back.

iGate has recovered impressively to make a serious play for enterprise IT service deals, and its recent leadership change hasn’t impacted the firm negatively, even if it did distract the firm’s focus for a short while. Its strong application services capabilities and financial services presence stands it in good stead; however, we would like to see more focus on business process solutions.

Other up-and-comers worth mentioning are Mindtree, which has shown strong capability in next-gen CRM services and Virtusa, which has barged its way into some significant engagements, most notably in the insurance sector, with compelling and practical solutions.

And for India as a whole? Clients are looking to broaden their portfolios of service providers to help with more than simple maintenance services. They want providers willing to roll their sleeves up and be innovative with industry-led platform solutions, the ability to provide analytics and insights that go beyond reactionary solutions of yesterday.

All-in-all, 2014 has the potential to be the best year yet for Indian IT services. And HCL, TCS, Cognizant, Wipro and Virtusa are the ones to watch as the race for supremacy hots up.