Whirling dervishes of Kentucky: Why Sufis are popular in America

The presence of Sufis in the American heartland, a place otherwise dominated by Christian churches and conservative politics, can be explained by the sense of community it offers 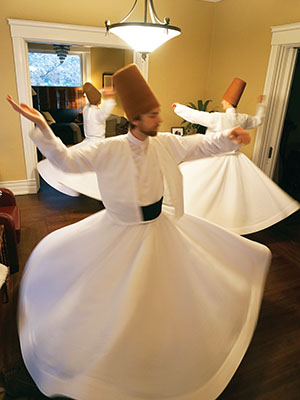 Image: Anna Rohleder
Seeking the divine: Chris Tate (in the front) and other members turn during an informal ‘sema’

It’s Thursday night in the Highlands of Louisville, Kentucky. Noisy bands of young people roam the commercial strip of Bardstown Road, anxious to get an early start on the weekend.  And the bars are glad to accommodate them, advertising everything from free WiFi to “Thirsty Thursday” drink specials that extend happy hour until 4 am.

But a few blocks away, on a street of tall trees and stately old houses, a different sort of gathering is taking place.

In the living room of one of the neighbourhood’s redbrick Victorian homes, about a dozen people sit on couches beneath framed verses from the Koran. Most of them have their eyes closed, breathing silently. The smell of oud incense wafts in the air. After a few moments, Sheikh Kabir and Sheikha Camille Helminski enter the room, taking their place on two identical chairs draped with white sheepskins.

“We begin in the name of the Source of life,” intones Kabir, lifting his hands in prayer. “Bismillah.”

Known as “the whirling dervishes” for their practice of spinning in circles as a form of worship, the Mevlevi Order of Sufis was founded 700 years ago in Konya, Turkey, by Jalal ad-Din Muhammad Balkhi, or Rumi. The fact that Rumi, a 13th century Muslim mystic, is now the most popular poet in America may go some way toward explaining the presence of Sufis in the country’s heartland, a place otherwise dominated by Christian churches and conservative politics. But it’s not just happening in Louisville.
“Today people are often alienated from society, from others, or experience very few relationships that are open and compassionate,” says Kabir Helminski. “Sufism supplies something that is missing from American culture now, which is a sense of community—although this is not the end of Sufism but one of the means.” Kabir was the first Westerner officially recognised as a sheikh by the late Dr Celaleddin Celebi, head of the Mevlevi Order and descendent of Rumi.

The Helminskis moved to Kentucky from California in 2012. The community that has since formed around them only numbers about a dozen people, but is diverse for its size. Members of the Louisville chapter of Threshold Society, the American foundation affiliated to the international Mevlevi order, range widely in age and background. The oldest is 67, while several are in their early 20s: Adelita Bedzetovic, for example, is a college student who discovered Sufism after taking an introductory course in religion last fall. Some of the members are new to Islam, while others, like the three generations of the Choudry family, were raised in it. In between are seekers who have come from other traditions: Buddhism, yoga and Christianity, too. “There are always hearts that are yearning, and when they sense a source of water they’re drawn to it,” says Camille.

Natasha Alexiouk left a comfortable New York City lifestyle to be closer to the Helminskis. She moved to Louisville in 2013, but has been following the Sufi way for about seven years. “People come to the path for different reasons: Some read a book, others see a sema [the traditional “whirling” ceremony], whereas others might be looking for love in a religion of fear,” she says. “But when you look at the threads that connect all of us, you see it’s not random. Nobody is here by chance.” But the Threshold Society does not proselytise. Appropriate to its name, it occupies an unusual middle ground between public and private, accessible and invisible. It does not advertise or market itself, yet its Sufism.org website receives more than 60,000 monthly page views. The Thursday night meetings are open in principle, which means there are often one or two guests among the familiar faces. Sometimes it is a curious local seeker. John Morrison, a professor of physics at the University of Louisville, heard about the group through an acquaintance. “I came to the Thursday meetings and immediately felt I had found in this group a context in which I could resolve personal issues which arise in my life,” he says. Visitors also come to Louisville from the other Threshold circles, which meet in cities around North America, the UK, Europe and South Asia. 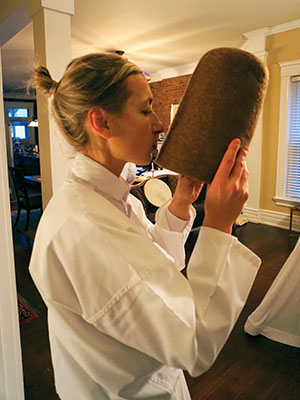 Kabir estimates the committed membership of Threshold Society at a few hundred people, though its mailing list goes out to more than 1,500. “My sense is the numbers are growing, while facing greater challenges than ever,” he says. Some of those challenges are financial. Other than residential retreats, there are no fees charged for the teaching, which includes everything from weekly study sessions of Rumi’s epic poem, the Masnavi, to lessons in whirling—or “turning,” as the Mevlevis call the practice. The society relies on the generosity of its members, and its running costs sometimes exceed donations. In the wider context, the challenges lie mainly in the encounter with dogmatic Islam on the one hand and American culture on the other.

Sufism is often seen as a mystical form of Islam. What that means in practice has come in for a wide degree of interpretation, both throughout history and into the present day. Maqsood Choudry, who says he admires the Helminskis but does not consider himself one of their followers, offers one definition: “Sufis are the people who completely surrender themselves. Their way of thinking and being is all centred on attaining the pleasure of God.”  To orthodox Muslim critics, that sounds questionable. The most common charge levelled against Sufis in general is that, with their visits to the tombs of saints, and practices involving music and dancing and zikr (chanting the Divine names of God), they are not  “real” Muslims.

Kabir says, “In our living of the principles of Islam, and our understanding of the Koranic revelation, we may end up being a very different example of what it is to be a Muslim than people would expect.” In their public appearances, the Helminskis address a variety of audiences, both secular and religious, in venues ranging from film festivals to a Catholic retreat centre. In the Louisville circle, only one woman wears a hijab, and just a few of the men have beards. Some pray regularly in the city’s main mosque, while others have never set foot there. 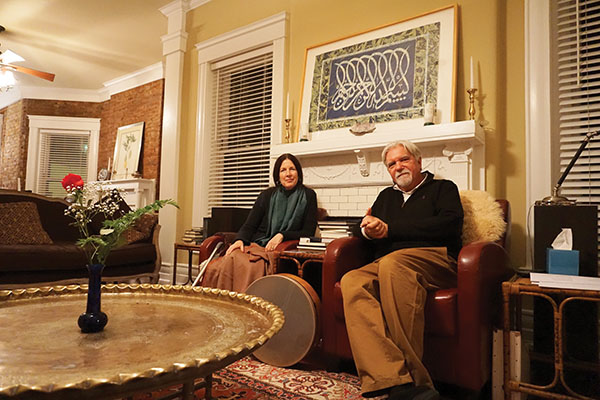 Camille and Kabir Helminski, sheikha and sheikh of the Mevlevi Order

Inner transformation is the main goal of Sufi practice, yet outer practices are still important. During the most recent Ramadan, the group fasted—and feasted—together, with potlucks at a different location almost every night, including one interfaith iftar held at a local Christian church.

New members are encouraged to commit to salah, the ritual prayer, and read the Koran. Special emphasis is put on cultivating manners, or adab. But it is a foreign concept in America. So much so, that customs, which may be taken for granted in a culture of the East—such as showing respect for elders and performing ablutions before prayer—have to be taught to adults who grew up without those values. Because adab is subtle, not everyone gets it, or understands the purpose it serves. Seekers who come to Sufism in search of ecstatic states or the emotional love stories they perceive in Rumi’s poetry may be disappointed to discover it is much more about practicing self-control, humility and respectful relationships. “One of the sayings of the Prophet is, ‘The best human beings are those most fastidious in friendship,’” says Camille. 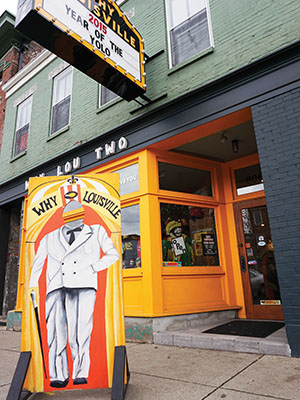 Image: Anna Rohleder
Beyond face value: Although better known for horse racing and bourbon, Louisville is also home to a variety of arts and cultural venues

In that way, Sufism runs counter to the strain of consumer culture in general and American society in particular, which insists that relationships can be negotiated on the terms of disposability and convenience, and that one’s worth and well-being come down to purely material factors. Qasim Choudry, who has a medical practice in Louisville, says that it helps him to remember the values he grew up with. “Even at the most stressful times, coming to zikr centres me again.” His mother Qudsia agrees: “When you go to their meetings you are full of peace.” Adelita Bedzetovic changed her major from business to secondary education after joining the Louisville circle. “That’s the day I decided I wanted to put back into the world some of what I had been given,” she says.

Because service is an important dimension of the Sufi training, each member of a dervish lodge would traditionally have a job to do. This is a particularly difficult custom to square with the overscheduled lives of Americans in all but a symbolic sense. A few of the members of the Louisville circle have honorary jobs, such as making tea on Thursday nights. Otherwise, however, there is a sense of shared responsibility and generosity. Whether someone has to go to the airport or is sick in the hospital, the other members arrange among themselves to help, without the person in need having to ask. “The best service is invisible,” says Chris Tate, who often assists the Helminskis with household chores, and also volunteers at area soup kitchens. “Service and prayer merge when they are done for God’s sake alone, without asking anyone but God to recognise it.”

Other members of the group also volunteer and do various kinds of service in the larger community on an individual basis. 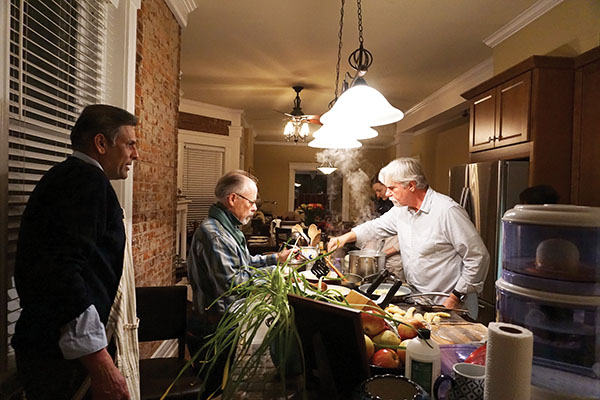 Muneeb Choudry, Fred Fischer, Nicole Kowalczyk and Kabir prepare a meal together. The kitchen is considered a sacred space in a traditional dervish ‘tekkye’ (lodge)

Still, some see a bigger impact. Abdul Rauf Gharib, who has lived in Louisville for 30 years, says, “It’s very positive that we have a local Sufi circle now. I think it will help to lift some of the heavy karma caused by the local economy, especially gambling and making alcohol.” He is referring to the two things that Kentucky is most famous for: Horse racing and bourbon.

The notion of Sufism as a remedy for the alienation and addictions of modern life is a theme picked up by Kabir when he shares his vision for the future. He calls it “Sufism 3.0”: A model in which Islam is the operating system and Sufism is the software.  He explains: “The Sufism being born in America will not be a museum-like recreation of the past, but will be a new expression and application of traditional wisdom.” And, if the Louisville chapter is any indication, new Sufism is likely to be found wherever there is a yearning for it. As Rumi himself wrote: “Don’t seek the water; increase your thirst, so water may gush forth from above and below.”