How did the strategy adjustments help eBay to win in Asia?

There are many characters to distinguish great companies with others, such as innovation ideas, stunning development speed and outstanding leadership.  However, not all great companies could rebound after their failure in some specific areas.  As we all know, the case of Starbucks in Australia and Wal-Mart in Korea, both reveal the insurmountable local market differences and accordingly systematic slow responses could lead many business legends to be negative examples.  To compare and research how to practice in this situation, we pick up the case from eBay and discuss how the strategy adjustments could help eBay come from behind to win.

eBay has a vision “to be the world’s personal trading community.”[i] Nevertheless, it struggled with early strategic moves in Asia, Japan and China in particular, and needed to reconsider its global strategy.  In general, eBay sought global growth through acquisition and joint venture as way to gain quick access to markets and establish a leadership position.  Since 1998 eBay has made 37 significant acquisitions globally, 25 of which amounted to $10.1 billion[ii]&[iii].  In Asia, three acquisitions of leading online marketplaces in South Korea, China, and India totaled $1.5 billion.  eBay sites also exists in other Asian countries such as Taiwan and Thailand.  Approximately 54% of eBay’s 2010 net revenue comes from international locations[iv], but revenues derived from Asian markets appear to be still much smaller. 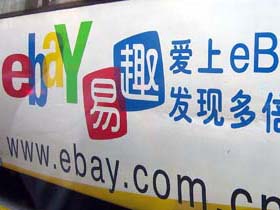 eBay launched in Japan in February 2000 through a joint venture with NEC Corporation,  where its first strategic missteps in Asia began.  The crucial mistake was that eBay entered the market after Yahoo! Japan, who was the first-mover of online auctions in Japan.  eBay also did not alter its US model to meet local market conventions.  For example, eBay charged commissions for transactions while Yahoo! Japan did not, and it required credit card information in spite of the fact that use of credit cards was not as common in Japan as in the U.S.  Furthermore, eBay hired a CEO who was new to the internet business and chose a subdued marketing approach in comparison to Yahoo!.  As a result, eBay gained only a small share of the Japanese online auctions market and exited the country in March 2002.

A similar situation played out in China one year later.  Upon acquisition of EachNet.com, a leading Chinese online auction house, eBay controlled 80 percent of the Chinese e-commerce market in 2003[v].  Again, eBay charged transaction fees while competitors offered free transactions.  Chinese consumers also expected to hold live conversations to cultivate trust and obtain first-hand information. In addition, eBay’s PayPal payment method did not integrate escrow into the sales process.  eBay failed to exert its three fundamental strengths in China market.  Furthermore, eBay’s corporate management did not seem to capitalize on expertise of local management.  An executive from eBay Germany was appointed as eBay China’s Chief Operating Officer, and eBay China’s executives complained that headquarters did not listen to their concerns regarding Chinese market.  This sentiment was especially true for executives from original EachNet.com team.  After only three years, in 2006, eBay surrendered to a local Chinese company, Taobao.com, who eclipsed it in the market.

eBay’s early strategic failures in Asia can best be summarized as limited local market know-how, a lack of innovative products and processes in the local market, and a centralized management style[vi].  However, eBay did not give up on Asia.  It reentered China in 2007 and Japan in 2008, with a new strategic approach, which appears to have evolved from what eBay has learned from its early failures.

eBay devised a new strategic market by determining alternative customer needs. In China, the new strategy of eBay is not competing with Taobao.com directly, but to deliver differentiated global solutions by utilizing eBay’s international trading network; one of its global competitive advantages.  This strategy targets sellers like Tang Fengyan[vii].  Tang Fengyan established a clothes shop four years ago.  She discovered eBay offered her an ideal international selling platform.  Last year her revenue reached $700,000. Despite its small domestic market share in China, Tang Fengyan is thinking seriously about international customers.  To reach these customers, eBay is the exclusive platform, as Taobao.com remains focused on the domestic market.  eBay has innovated and adopted its business model to the local market and integrated the business model with its new strategic market in order to regain competitive advantage.  In 2010 eBay collaborated with China Postal and the U.S. Postal Service to create a service which allows international buyers to track products sold by Chinese sellers and Chinese sellers to provide free transportation to international buyers.  The new business model is to establish linkage between local sellers and international buyers, referred to as its “transnational model” by eBay.  eBay implemented this business model in Japan as well. 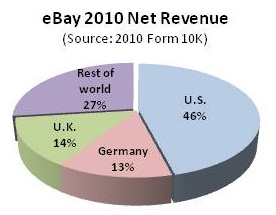 The new strategic market and business model has shown results.  From 2006 to 2009, eBay’s annual transaction volume growth rate in China exceeded 100%.  In 2010, the transaction volume of eBay China reached $4 billion.  15% of products listed on eBay’s U.S. website were sold directly from China, represented by more than 20 thousand Chinese sellers.  The largest seller has revenue surpassing $2 million monthly.  eBay China already have over 1,000 employees in its Shanghai office and is busier than ever[viii].
eBay also readjusted its relationships between headquarters and its Asian subsidiaries.  Asian subsidiaries now have greater autonomy in strategic development.  Their roles are shifting from strategy contributors to strategic leaders.  For example, after acquiring the Indian on-line market place, Baazee.com in 2004, eBay deployed a four-step checkout process for Indian customers, which it eventually took global.  India, with its software engineering depth, is leveraged for the global enterprise.  Jay Lee, Vice president of eBay Asia Pacific, commented on lessons learned: “We learned a lot from the process of reentering Asia market.  China is a very important market, and we learned to deal with it with different approach.” [ix] The fundamental strengths, such as PayPal, were all applied to sharpen local competitive advantage.
Lastly, eBay established an array of competitive alliances. These competitive alliances became “windows” and detectors to the local market.  eBay can draw on local know-how within the alliance to adjust its strategies.  eBay reentered Japan in late 2007 through a joint venture with a previous competitor, Yahoo!.  It now operates a Japanese language website called Sekaimon to confront other Japanese competitors such as Rakuten.  In 2009 eBay expanded its operations in the South Korean market by combining existing eBay Korea with Gmarket, an e-commerce industry leader there.  This combination “establishes an exceptionally strong leadership position for eBay in one of the world’s largest, most dynamic and innovative e-commerce markets,” said John Donahoe, eBay CEO[x].

eBay has made progress in Asia. Its market leadership in India is a testament to its success.  However, eBay must remain prepared for new challenges and market evolutions on the heels of their recent achievements.  India is a good example here as eBay will likely face the entrance of Amazon.com in 2012.  The new strategies and new business model in Asia can be quickly replicated by competitors, just like its previous business model. Consequently, eBay must tirelessly innovate to maintain its competitive advantage, and feed shifty local customer’s needs in the future.  Furthermore, competitive alliance is a short-term solution to meet eBay’s competitors in Asia.  To realize gains from the alliances still requires eBay to enhance its learning capacity for local market know-how.  Finally, whether eBay is able to tap its Asian subsidiaries for global reach in a dynamic world marketplace still is a challenge for Donahoe. Foreign companies have “apparent disadvantage (in Asia market), they are somehow hubris and pompous” to local market needs, pointed out by Mark Natkin, managing director of a Beijing-based consulting firm[xi].  Whether eBay can surmount this through innovation and properly balancing its global and local market strategies will define eBay’s future success in the region.
[i] “Strategic evaluation of eBay” (2007): n. pag. Web. 6 Aug 2011. http://www.slideshare.net/lars.schmidl/strategic-evaluation-of-ebay.

Tweets by @forbes_india
Too Few Good Women: Why Are Boards Still Male Domains?
May the Best Brand Win