How Odisha's women defied the odds to make a water source

In Mangarajpur, after years of futile protests at the Kujang Block Development Office, 150 women took matters into their own hands to restore a cyclone-hit pond into a freshwater source 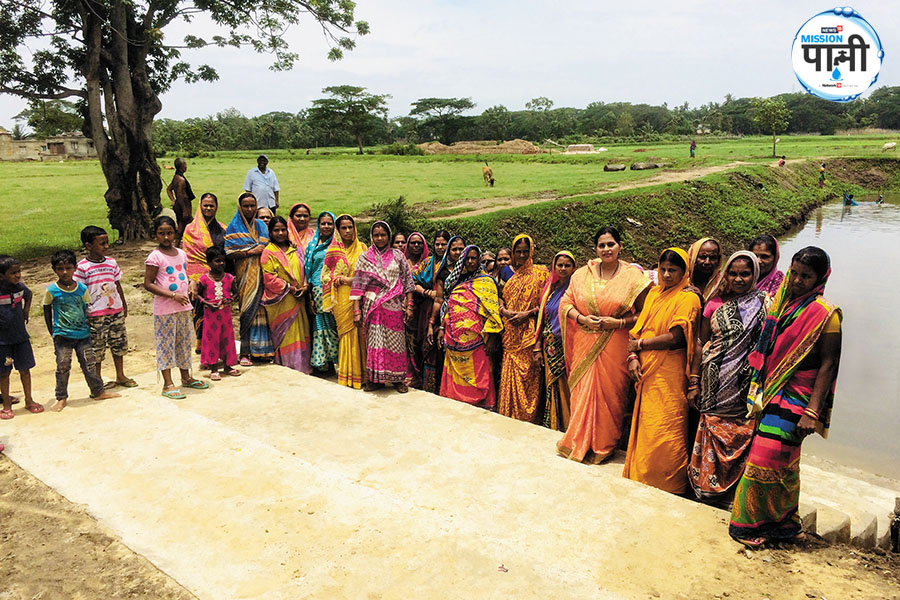 About 150 women removed weeds and cleared the swamp of a pond in Mangarajpur, Odisha, in the hope of getting clean water; Image: Namrata Sahoo

Mangarajpur is lush green. Located on the eastern side of coastal Odisha, it comprises five villages and borders the Bay of Bengal. Its greenery, though, camouflages an acute water crisis: Its groundwater is brackish because of its proximity to the bay while the government’s piped water has high iron content. “Can I please finish cooking the rice before we begin talking, or else it’ll go bad,” says Purnima Tripathi, the sarpanch of Mangarajpur panchayat who uses moderately saline water for cooking, which results in food going waste from time to time. It is a typical day in the life of Tripathi and her family. Her husband Bipin worked with the Indian Air Force before deciding to head back home, in 2016, to fulfil his wish of developing his village. She shared her husband’s dream and contested the panchayat elections just three months after returning to Mangarajpur with her husband and daughter. She won with an overwhelming majority, despite having no political affiliations.

Access to clean freshwater has been a long-standing problem for the villagers. It is especially problematic for women—responsible for fetching it—who need freshwater for cooking, cleaning and taking care of their cattle. “To counter the high iron content in the water, we fill a handi with some sand, make a small hole at the bottom, fill it with water and hang it from a height. The water gets filtered through the sand and drips out, and is collected in another vessel,” says Tripathi. “Many women are forced to use this unsustainable method to get some clean water. I myself have to harvest rainwater on my terrace and use it for cooking.” The nearest source of clean water is about 5 km away, from a pipe that supplies water from a borewell in Santara village. The state government had dug the borewell a few years ago, at the border of the Mangarajpur panchayat area. Its water flows through a 6-inch thick, unmanned pipeline that passes through five villages of the panchayat. Due to tampering and pilfering along its length, the water in the pipeline does not have enough pressure to reach villages that are further away from the source. “Families have to make multiple trips to the nearest freshwater source, which is the borewell pipeline. If a family has livestock, it makes things more difficult as the cattle will not drink brackish water,” says Kavita Swain, another villager. The borewell water also has to go through an Iron Removal Plant because of its high iron content. “Officially, taps have been provided at designated spots, but still people tamper with the pipeline,” says Bipin. Ironically, the village is just about 3 km from Odisha’s largest river, Mahanadi. He says that one of the solutions lies in government efforts to transport river water to the villages, but nothing has been done so far. Women in the village eventually decided that they had had enough. After years of futile protests before the Kujang Block Development Office, they decided to take matters in their own hands. About 150 of them, from 13 self-help groups (SHG) met Tripathi earlier this year and insisted on restoring a particular village pond, which was rendered useless after a super cyclone hit the state in 1999. The pond had been filled with the carcasses of animals that had died in the cyclone, thus poisoning its water. The location of the pond was ideal for households located at the tail-end of the panchayat, farthest from the water pipeline. This February, the women began digging the unused pond, which was about 120 feet long, 60 feet wide and a little over six feet in depth. First, they removed the floating weed that had collected on the stagnant water over the years. “Removing the weed was especially difficult, as they had deep roots and the women had to go into the water themselves to uproot them,” Tripathi explains. Then they removed the layers of swamp comprising mud, plant and other sediments that had decayed over the years. They used an earth-mover machine, but that too couldn’t go beyond a point due to the depth of the pond. The women then formed a human chain and began clearing out the swamp, one bucket at a time. This part of the restoration took the longest time. Bisaya Behera, the oldest among the SHGs involved in the restoration, says in Odia, “While clearing the swamp, we dug out bones of the carcasses. Many other women and I cut my feet on pieces of glass, but we still went on working, relentlessly, because at the other end of our struggle was the hope of clean water for bathing and cleaning.” After a point, when machines had to be brought in, they were faced with a financial crunch. “We tackled the problem swiftly by collecting ₹65,000 among ourselves and handed it over to the sarpanch. We were single-minded in our approach to see things through,” says Meenakshi, who was involved in the work. When the water body’s restoration was finally completed, concrete steps were built for it in the first week of July. Although the pond has been restored, it still does not solve the problem of drinking water. The sarpanch and villagers have approached senior politicians, and have registered their grievances with the Odisha Water Resource Department, but to no avail. Tripathi is now in the process of approaching nearby industries, hoping to get things done through corporate social responsibility funds. But the women remain undeterred. The elderly Behera says, “If we are provided with the right kind of enabling support, we’ll rise on our own. I’ve seen the village suffer due to lack of freshwater for decades, but now things need to change.” Sign the pledge to support Network 18's Mission Paani campaign here: https://www.news18.com/mission-paani/