Buses on the Fast Track this Season

The market for buses in India has really begun to shape up. This is clear from the mood at Auto Expo 2010. A space which for many decades had belonged to Tata Motors and Ashok Leyland and Volvo, is now seeing quite a few players getting serious about the opportunity in public transportation.

To begin with, Mercedes Benz launched its 3-axle intercity luxury bus priced at Rs. 85 lakh to Rs. 90 lakh. This is an interesting change of strategy for the German luxury car maker. Mercedes Benz initially entered the Indian market with its 2-axle bus a few years back and had decided that it would solely concentrate on business from private operators. It wanted to stay away from government contracts. 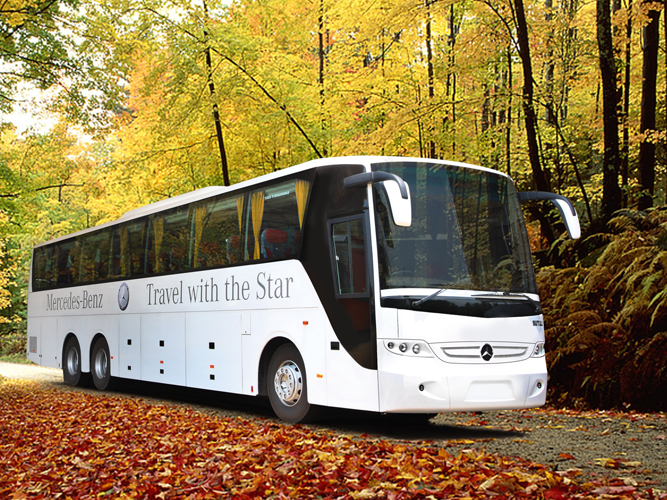 Mercedes Benz launched its 3-axle intercity luxury bus priced at Rs. 85 lakh to Rs. 90 lakh
But, the downturn last year meant that quite a few operators weren’t in a position to arrange financing and Mercedes had a tough time. So to de-risk its operation, the company is now in talks with many state transport undertakings to sell its 2-axle and 3-axle buses. Wilfried Aulbur, managing director of Mercedes Benz said that the company is in advanced stage of talks with the Kerala State Road Transport Corporation (KSRTC).
Typically, it takes four years for a private operator to make money on a luxury coach. “It depends a lot on the routes you ply; and the money making routes are pretty much in the southern and western part of India,” said A. Sadik, director, Parveen Travels, Chennai. Sadik is the first person to buy a Mercedes 3-axle bus for his fleet. It will be interesting to see how Mercedes Benz breaks into the bus market where ‘Volvo’ is synonymous with intercity travel. Mumbai-ites can also look forward to some comfort. Sunil Savla, owner of Neeta Volvo, a Mumbai-based operator has placed orders for about 10 buses.
I also bumped into Siddhartha Lal, managing director of Eicher Motors, who was quite kicked about the segment. In fact Eicher Motors also launched a semi low-floor city bus which will be available in diesel and CNG variants. (Lal is really ambitious and he is very serious about his business, but more on him later). Then there was a concept hybrid bus (which runs on a lithium ion battery) from Tata Motors and Marco Polo, which is expected to be launched early next year, along with a plug-in CNG hybrid bus from Ashok Leyland, code-named HYBUS, which would be used during the upcoming Commonwealth games.
PS: Ratan Tata was at the Mercedes Benz stall and was heard to remark – “It’s the best stall at the Expo.” Now that’s some compliment, isn’t it?

Tweets by @forbes_india
Keep Your Feet on the Ground
Penny-Wise