In the issue which hit the stands by the 19th December, the magazine features a special package of stories about the lives and work of 21 fabulously talented, vastly influential people and their credentials for being Person of the Year. To name just three: Karambir Kang, the General Manager of Taj Mahal Hotel who stood up and delivered even at the worst moment in his life; Jean Dreze, a development economist who has shown us how economic policy can be an instrument of deep social transformation and Rahul Bhatia, who’s built India’s most profitable low-cost airline.

Finally, there could be only one winner. And the team chose Rahul Gandhi. 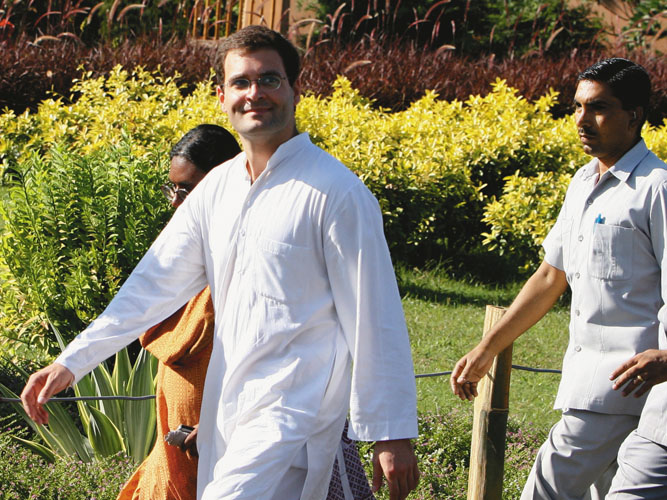 Image: Dinesh Tripathi
As Indrajit Gupta, Editor, Forbes India, says, “In making our choice, we fully realise that we’re gambling partly on hope. But then, we reckon Rahul Gandhi represents the best chance India has to clean up the cesspool that politics and governance have become.” Views echoed by Dinesh Narayanan, the author of the profile of Gandhi, and guest columnist Rajdeep Sardesai, Editor-in-Chief, IBN18 Network.
Why a ‘person of the year?’ The purpose of the exercise isn’t to put an individual — or even a set of individuals — on a pedestal. Yes, their achievements and their contributions to our lives must be recognised. But the main goal here is to find something else. After 2007’s hype, 2009’s collapse and the year of sober introspection that was 2009, 2010 will be an inflection point in India’s history. It is a time in which we must find a new way of doing things. One that’s not borrowed from the West, not learned from management tomes; one that is rooted in our own culture, history and unique circumstances. Our way. An Indian Way. And through the profiles of these 21 remarkable people, we can find that way.
The year-end special issue also features a series of lists that will open up a world of possibilities. Lists that look ahead to 2010 and predict and influence the way we will think, compete, dream, watch, read, listen, eat, drink, plan, travel, splurge... The way we will live.

Tweets by @forbes_india
5 Cities Rediscovered with the Help of Concierges
Rahul Gandhi: A Coming of Age