Alang: Looking at a healthier future

Alang, the world's largest graveyard for ships, has been notorious for its human and environmental safety standards. But it could now be looking at a healthier future 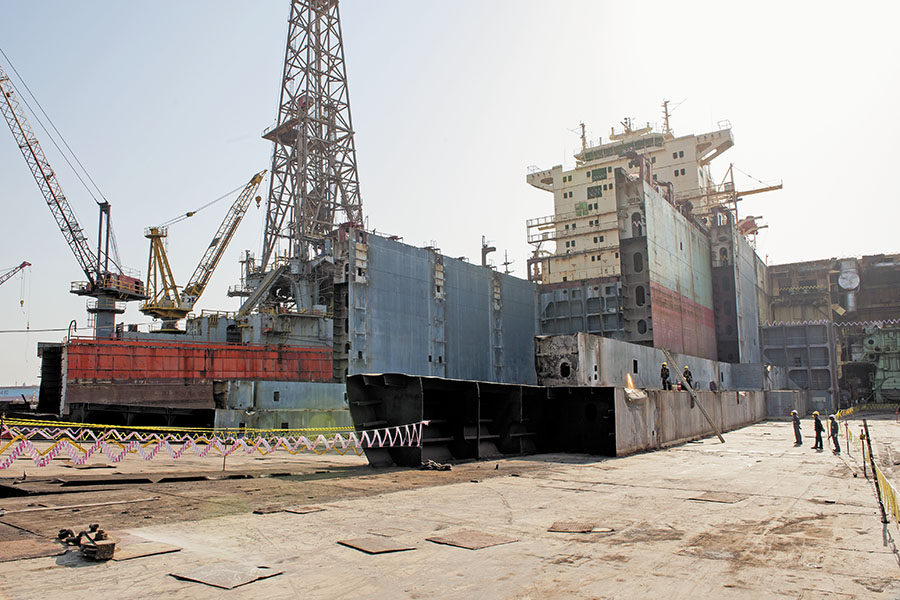 There is always something morbid about a place where things are taken apart, piece by piece, after the end of their useful lives, and sold off as scrap. A once grand, or at least useful, creation is systematically stripped and wrenched apart, and reduced to a pile of junk; its utility down to the cost of scrap metal.

Alang, the world’s largest graveyard for ships, would score high on such morbidity. No wonder then that it found a place in Max Brooks’s 2006 novel World War Z: An Oral History of the Zombie War. But what Brooks did not include in his depiction of humans turning into zombies, because of a global pandemic, were the real life horror stories of Alang’s ship breaking yards that have been notorious for endangering human lives as well as the environment for decades.

But as global calls for sustainable business practices across industries gather volume, a few ship owners and recyclers are determined to mend Alang’s notorious image and position it as a global hub for responsible ship recycling.

Alang, situated 50 km from the city of Bhavnagar in Gujarat, is a 10 km sandy stretch, facing the Gulf of Khambhat; it is dotted with battered ships of all shapes and sizes, anchored perpendicular to the shore. Oil and gas tankers, container vessels and even cruise liners wait to be reduced to scrap. The yard became operational in 1983, when the state government conceived it to create mass employment for low-skilled workers. Alang’s yards have a capacity to break 450 ships annually, and the industry is now worth around ₹6,000 crore.

The barren landscape on either side of the well-laid road that leads from the highway to the Alang-Sosiya Ship Recycling Yard is lined with shops selling every imaginable item that has been ripped from the ships—engines, pumps, crockery, dishwashers, lifebuoys and wooden furniture, for instance.

Deeper within Alang, the road that runs adjacent to the 170-odd shipbreaking plots (of which around 130 are operational) developed by the Gujarat Maritime Board (GMB), gets bumpier and dustier. The GMB gives out yards on long-term leases to private companies to operate them. 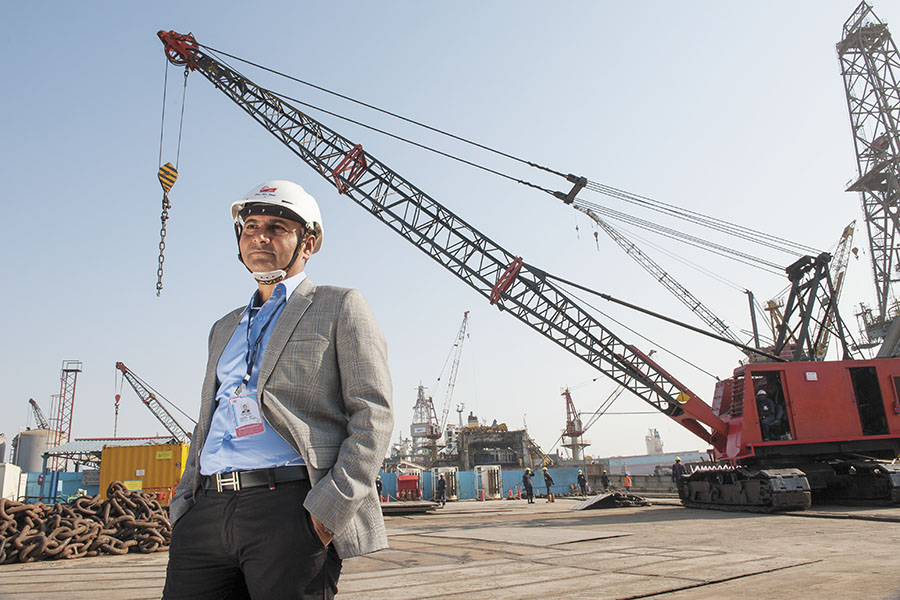 A partially dismantled ship at Alang. The Gujarat town accounts for half of all ships recycled globally
Image: Mexy Xavier
Most of the 17,000 men working at the yards leave their shanties early in the morning, and head to work wearing yellow or white hard hats, dark blue jumpsuits, and industrial boots. But despite the safety standards that their attire suggests, most of the yards function like haphazard junkyards: Harmful substances, such as asbestos and oil, often spill into the water, contaminating the marine ecology; workers who use gas cutters are exposed to hazardous fumes; there have also been reports of workers dying due to gas explosions. A 2014 study commissioned by the National Human Rights Commission and conducted by the Tata Institute of Social Sciences confirmed the poor working conditions at Alang and pointed to lax implementation of safety regulations. It found that, according to official records, 470 deaths were reported between 1983 and 2013, with a possibility of the number being higher.

This is the price Alang pays to keep its shipbreaking industry competitive. Similar substandard working conditions are also rampant in the shipbreaking industries of Gadani in Pakistan and Chittagong in Bangladesh. It is not surprising then that these three locations account for close to 90 percent of all ships recycled in the world; Alang alone accounts for about half.

The other large global ship breaking centres are in China (Zhejiang and Jiangsu, among others) and Aliaga in Turkey, where safety standards for workers and the environment are higher than at Alang.

The continuing slowdown in global trade, and the consequent excess capacity in the shipping industry, means shipping companies are scrapping more of their vessels than before. Shipping yards in China and Turkey pay less to shipping companies for their retired ships owing to their higher operating standards, compared to yards in Pakistan, India and Bangladesh. But as global regulations governing ship recycling become more stringent, shipping companies are under pressure to send their old vessels to yards that follow safety and environmental norms, where they fetch a lesser price. 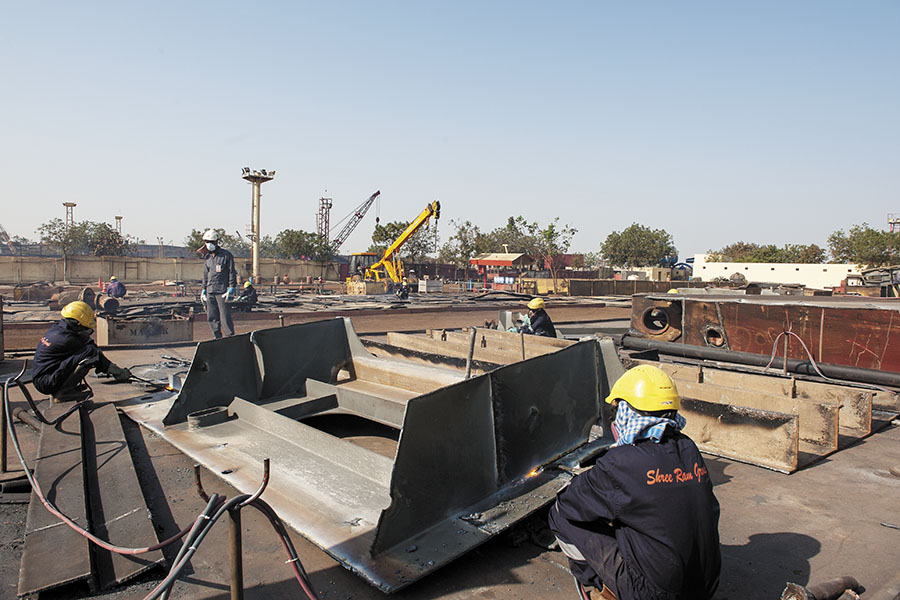 Both yards of the Shree Ram Group have been certified by the Hong Kong Convention
Image: Mexy Xavier
In order to get a better price for retired ships from yards that operate with high safety standards, a few shipping companies are now trying to develop Alang as a yard adhering to global benchmarks. One of the shipping lines implementing this strategy is Denmark-based publicly listed company AP Moller-Maersk, which has $35 billion (around ₹2.24 lakh crore) in revenue. In 2015, it tied up with Chetan Patel, owner and director of the Shree Ram Group, and the Masani family, which owns YS Investments, to create a benchmark for others to hopefully replicate. In 2015, China Navigation Company (CNCo) also committed itself to the development of Alang.

“We are working with the more far-sighted ship recycling facilities in Alang, who committed significant quantities of their own money to raise standards with zero guaranteed return, to move the safety, environmental, social and operational standards from the previous, often very poor, practices to those of a responsible industry,” writes Simon Bennett, the Singapore-based general manager of sustainable development at CNCo, in an email.

Annette Stube, head of sustainability at AP Moller-Maersk’s transport and logistics division, says her company has been sending its end-of-life ships to only responsible ship recyclers in Turkey and China since 2009. But occasionally, if there is more life left in the ships, the vessels are resold. “Sometimes, people reused the ships that we sold and sent them for recycling to Pakistan or Bangladesh eventually,” says Stube.

To clamp down on this practice, and to increase the number of responsible ship recyclers to choose from, in 2015, Maersk decided to work with some progressive recycling yards at Alang and bring them up to global standards. “Any business would like to have many options. It is a strategic business consideration where our position is stronger or weaker depending on the bargaining power of the procurers,” says John Kornerup Bang, head of sustainability strategy and shared value initiatives at AP Moller-Maersk.

CNCo’s Bennett also mentions that the recycling capacity in Turkey and other European Union countries is “woefully inadequate” to handle the number of ships getting scrapped. “Additionally, it would be prohibitively expensive for CNCo to send ships trading in the Asia Pacific region to Turkey for recycling. The market price for ships to be recycled in China is currently skewed because of government subsidies that keep shipyards competitive,” he adds.

While CNCo’s and AP Moller-Maersk’s rationale for upgrading Alang is clear, what is in it for Alang’s shipbreaking companies?

Patel (42), whose business group’s interests range from ship recycling to real estate, owns two yards at Alang that have been certified by the International Maritime Organization’s (IMO) 2009 Hong Kong International Convention for the Safe and Environmentally Sound Recycling of Ships. The certification was awarded by ClassNK, a Japanese ship classification society in 2015. Patel’s and Masani’s yards are among at least 17 yards in Alang that have been certified by the Hong Kong Convention, which sets out standards that cover the handling of hazardous materials, recycling facilities, the design and construction of ships, and the preparation of ships sent for scrap. However, it won’t come into force until it is ratified by 15 countries, representing no less than 40 percent of the world fleet’s tonnage. 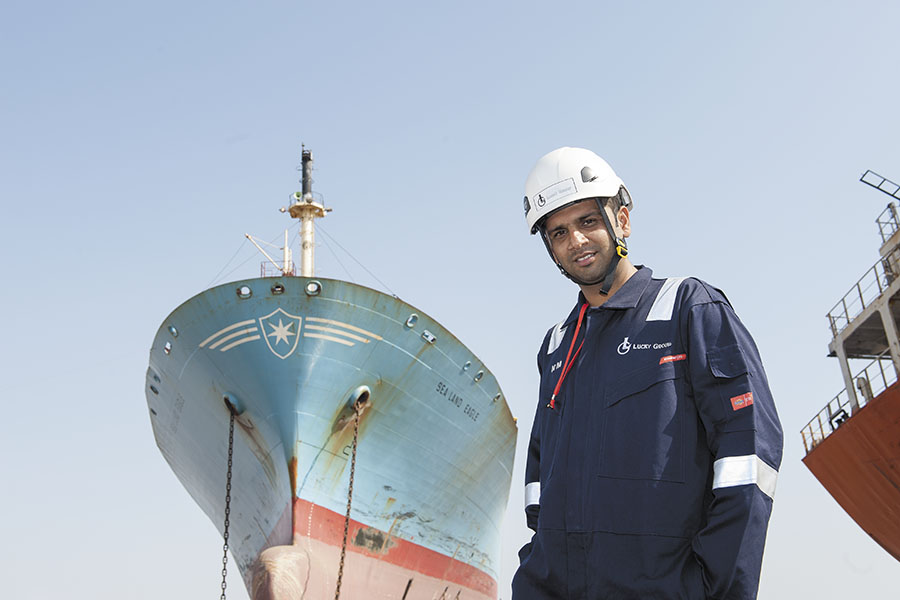 So far the Convention has been ratified by only six countries around the world—Norway, Congo, France, Belgium, Panama and Denmark. It is expected that by 2018-19, many more countries will ratify the Convention, which would make it difficult for the non-certified yards at places like Alang to get new business.

The breaking and recycling of ships in India is supposed to follow the Shipbreaking Code 2013, issued by the Union ministry of shipping.However, the ministry itself had come under flak from environmental groups for not factoring in pollution. Consequently, the ministry issued amendments in 2016 that covered issues such as treatment of radioactive and hazardous waste material.

Patel’s father Mukesh started the Shree Ram Group in 1994. It has recycled close to 280 ships since then, and brings in ₹300 crore in revenues each year. He has spent ₹2.5 crore for one yard, and a little more for the other (which is bigger in size), to instal impermeable flooring in the front yard (where metal blocks from the ship first land) and backyard (where the blocks are cut into smaller pieces) to prevent soil and water contamination; a mechanism to use the hull of the ship as a safety net to prevent metal blocks falling into the sea; a high-tonnage crane to lift the blocks and bring them to shore; pipelines for transferring used ship oil; and high-quality safety gear and emergency response systems.

YS Investments has spent close to ₹13 crore on similar upgrades at one of their facilities, which has an annual turnover of ₹100 crore. “We are thinking about how our business will evolve over the next 10 years,” says Naeem Masani, 28, managing director of YS Investments. For the Masanis, their Alang yard is also a source of scrap steel for their steel rolling mills in Bhavnagar, and the used ship oil is utilised in the lubricants they manufacture.

In addition to the Hong Kong Convention, AP Moller-Maersk has made Shree Ram Group and YS Investments adhere to its own Responsible Ship Recycling Standards (RSRS), which prescribe additional safety measures under which its own experts stationed at the yards have the authority to stop work if they observe any lapses. AP Moller-Maersk has decided to sell two ships to Shree Ram Group and one to YS Invesments at a discount, and has committed a steady supply of ships to these facilities as long as they maintain their standards.

While the Hong Kong Convention doesn’t specifically address the working conditions for yard workers, AP Moller-Maersk and CNCo are trying to ensure that Masani and Patel construct International Labour Organization-compliant dormitories for workers as part of the overall facelift of their facilities.
The next goal for Patel is to get his yards certified according to EU’s standards, so that he can then buy retired ships from European shipping lines (the EU Ship Recycling Regulation of 2013 require EU-flag ships to be recycled only at facilities they recognise).

But even as Patel aims to further improve his yard, a canister of chemical falls into the ocean from a ship at a yard next to his. The chemical fumes rising from the water serve as a grim reminder that while a beginning has been made to redeem Alang, more needs to be done to break old mindsets and not just ships.