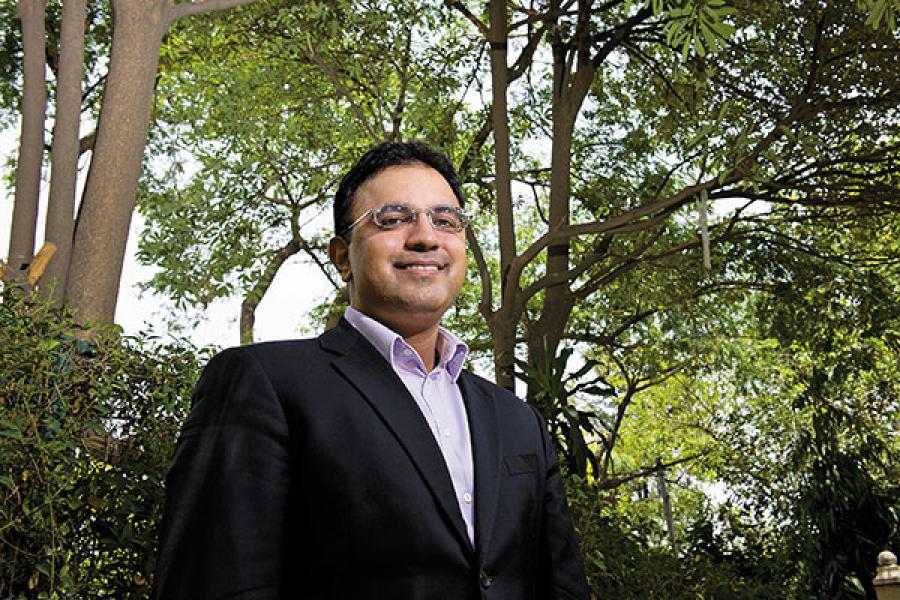 Zaitun lives in a makeshift house in Chandapura village in Bulandshahr, a district in UP about 80 km away from New Delhi. Until four months ago, 35-year-old Zaitun, a single woman, relied on her embroidery skills to eke out a living. The work, which she did on an irregular basis, was her only source of income. But four months ago, she was hired by Dharma Life—a social enterprise that operates out of Delhi—to sell products such as solar lamps, stoves and sanitary napkins to villagers to improve their quality of life.

Zaitun faced much resistance from her family when she decided to join Dharma Life. “My brother was against it,” she says. But today, she couldn’t be happier, and enjoys a sense of empowerment she never knew was possible. She makes a steady income of Rs 4,000 a month and has become popular in the village as a Dharma Life representative. A tiny nameplate bearing her employer’s name hangs at the entrance of her house.

Gaurav Mehta founded Dharma Life in 2009, with an aim to promote self-employment in rural India. Hindustan Unilever’s Project Shakti, which taps women self-help groups and invites them to become direct-to-consumer sales distributors, comes closest to what Dharma Life does. It, however, has a different business model. “We recruit people with basic education, who are in need of money and don’t have a full-time job. We typically recruit subsistence farmers and women,” says 34-year-old Mehta, who invested $200,000 from his personal savings into the company.

Dharma imparts sales training to its recruits. “The idea is to create entrepreneurs out of these people,” Mehta says. Zaitun, affectionately called ‘bua’ (aunt) by villagers, is one of the 2,000 entrepreneurs who work with Dharma. They earn a monthly income between Rs 2,000 and Rs 8,000 depending on their sales.

Dharma provides its recruits products that address rural needs. It sources these products from retail, FMCG and social enterprise companies. It then ships them to distribution points in a district where a local distributor (chosen by the company) and an enterprise leader (on the company’s payroll) ensure that the goods reach the local entrepreneurs. Dharma earns a margin from the sales.

If a product fails to find traction among villagers, the entrepreneur returns the unsold items to Dharma, which bears the loss. To counter such failures—and there have been some in the past—the company has a mentoring programme: Every week, an enterprise leader in the district visits members of his / her team to get feedback. It also conducts awareness drives.

Mehta, who was born in Germany and educated in the UK, is an accidental entrepreneur. Four years ago, when he was diagnosed with a liver abscess and hospitalised for a month, he got thinking about life’s priorities. Seven months elapsed before Mehta recovered completely. “It was a very tough time for me,” he says. “I had a near-death experience, which forced me to think of the direction my life was taking.”

At the time, Mehta specialised in private equity with General Atlantic in the UK. He also volunteered with NGO Pratham, which works towards providing education to underprivileged children in India. “I was introduced to Pratham during my undergrad days, when the founder Dr Madhav Chavan came to speak at my college,” says Mehta, who started a fundraising chapter for Pratham in 2004.

Mehta was convinced that he wasn’t cut out for the cut-throat world of finance. “I wanted to spend more time doing social work,” he says. In 2008, he quit his job and enrolled in an MBA programme at the London Business School. He continued to work with Pratham, and during a brainstorming session with them, he stumbled upon the idea of creating livelihoods in villages by selling products that have a social impact.

“This idea really excited me, but the problem was that an NGO can’t sell products, so we started Dharma Life,” says Mehta, who formed the company in September 2009 with seven classmates. In July 2010, Mehta finished his MBA and shifted base to India.

He identified issues (safe drinking water, indoor air pollution, malnutrition, personal hygiene) that plagued rural India. “Once we identified the causes, we looked at companies that could give us products that address these issues,” he says.

In its early years, Dharma relied on Pratham’s network to launch pilot projects in Maharashtra, UP and Bihar. The first pilot project was in Sangli in Maharashtra, where Dharma sold Reuters Market Light, a service by Thomson Reuters, that provides personalised agricultural information on mobile phones for a monthly fee. “We started with this product because moving it was easy. It was just a scratch card,” says Mehta.

During the pilot projects, Mehta discovered that he also had to create awareness. For instance, it was difficult to get villagers to use stoves. “We realised that it wasn’t just about selling products… it is also about educating people on the health benefits of moving to a stove from the traditional firewood,” says Mehta. Soon, Dharma started training its recruits to drive behavioural change in rural India.

Divya, a 37-year-old housewife-turned-entrepreneur from Malagarh village in the Bulandshahr district of UP, visits local anganwadis (government-sponsored mother and child care centres) every week to educate women about sanitary napkins. She’s managed to convince them about the benefits of such products.

In 2011, Shell Foundation, which supports social enterprises, committed a grant of $3 million to Dharma; half of the amount has already been disbursed. Pradeep Pursnani, deputy director - chief operating officer at Shell Foundation, met Mehta when it was looking for ways to get affordable and clean energy products to villagers. “We were doing some work on solar lamps and cooking stoves, but we found that last mile distribution was quite a challenge,” says Pursnani.

At the time, Dharma Life was in its pilot project phase. “This was the time when they were working with 400 entrepreneurs and all they had were excel sheets,” says Pursnani. Shell helped Dharma develop an IT system, build a sales force, and a mobile app.

Business expanded fast and companies started approaching Dharma to sell their products in rural areas. It added sewing machines from Singer and Usha, cycles from Hero, baby products from Johnson & Johnson and an iron-fortified nutritional drink from Coca-Cola. (Coca-Cola’s nutritional drink is a no profit/no loss product sold only through companies such as Dharma.) They have also been approached by Bata to distribute children’s school shoes in villages.

There is a danger that Dharma may turn into a distribution channel for corporates looking to exploit its established rural network to reach new customers. Mehta insists that he will not compromise on what Dhrama stands for, but admits that it’s not easy to strike a balance between buyers’ demands and the social impact of a product. “It’s about making a difference. We will never sell a fairness cream though there is good demand for it.” Similarly, the company will not use its entrepreneurs to sell alcohol and aerated drinks. He also plans to create an expert panel that will advise the company on products that can improve quality of life. Nutrition tops the list. “It’s why we didn’t raise money from a PE fund because then we would have been forced to look at our bottomline, and we don’t want to do that.”

Ankur Bisen, senior vice president, retail and consumer products, at consulting firm Technopak, sees Dharma as any other commercial enterprise that is creating a distribution network and acting as an enabler for products required in rural areas. “The company will have to start focusing on maximising profit, otherwise it won’t be able to build scale.” he says. Bisen argues that profit has a “fundamental role to play”. He cites Amul India’s model to drive home his point. Amul started as a cooperative movement, but nowhere in their philosophy is profit being compromised. “It is not about greed or selfish nature. The fundamental objective of profit is bringing in scale and efficiency,” Bisen says.

Growth and expansion are on Mehta’s agenda. Today, Dharma has a presence in 2,000 villages across five states—Maharashtra, Uttar Pradesh, Bihar, Rajasthan and Karnataka. It has sold consumer goods to over a million people. The company earns revenue through the margin it makes from sale of products, which is typically less than 10 percent. As of December, 2013, its income stood at Rs 3.1 crore, and it hopes to cross Rs 7.5 crore by the end of this calendar year. The company claims that it is two years away from profitability. It has 3,500 entrepreneurs on board. There are also plans to scale up operations, and Gujarat is a target.

While products are currently being sold at maximum retail price (MRP), Dharma looks to bring down product price by driving efficiency on the supply side and expanding operations to achieve economies of scale.

For Mehta, Dharma’s success is a lesson built on trial and error. When he meets entrepreneurs, he makes it a point to ask them what the company could do better. In Malagarh village, Divya points out, though baby products sell like hot cakes, locals want smaller packs, because they are more affordable. Mehta mentally jots down the suggestion and gets to work on it. There are many villages left to be covered.