Inside the picture world of Zack Rock

Zack Rock on picture books, the art of illustration, and how anthropomorphic animals can change the world 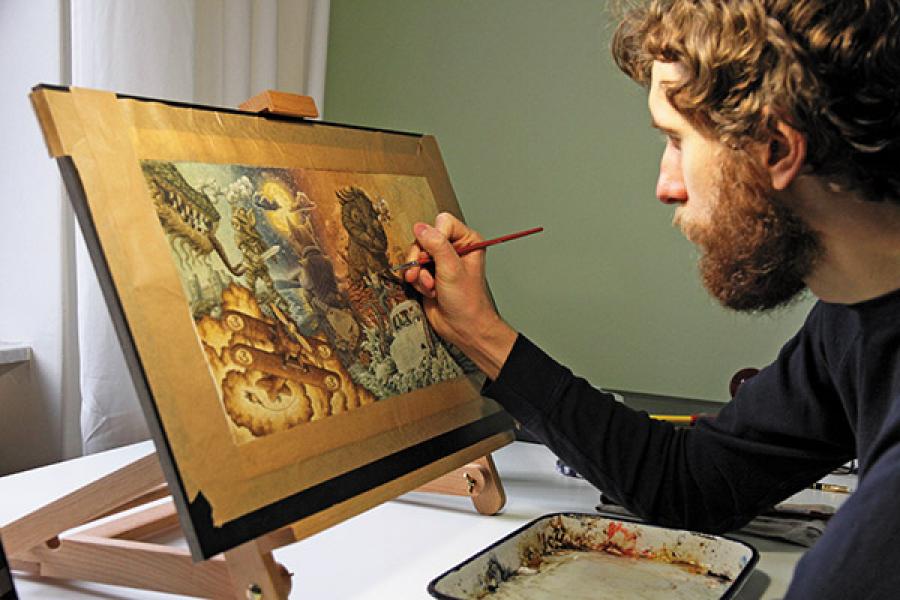 Image: Vaishali Dinakaran
Zack Rock in the middle of painting the most defining panel of his second book

A piece of toast with Danish philosopher and poet Søren Kierkegaard’s image burnt onto it. A miniscule Magic 8 Ball that is nestled, pearl-like, into an oyster shell. A tiny acorn, the top of which swings open once it is unlocked with an even tinier key to reveal a scroll of paper that is the final will and testament of a now-deceased squirrel.

Just three of the over one hundred objects nestled away in Homer Henry Hudson’s Curio Museum. And, just like Homer Henry Hudson himself, that sushi-eating canine who walks through the world wearing a three-piece suit and argyle socks, they all spring forth from the fecund and highly prolific imagination of writer and illustrator Zack Rock.

“Most of my job at one point was this,” Rock says to me before morphing suddenly into a statue. He rests his hand on his chin, like Rodin’s The Thinker, his brow is furrowed giving him a look of intense focus, but his eyes seem to reflect that at that precise moment, he’s far far away. In fact, it seems like he’s frozen in time, much like one of his own watercolours. And just when I’m wondering whether a quick rainshower might make his face run and his edges blur, he’s animated, once again crackling with energy, snapping his fingers together and saying, “I know! A piece of celery that’s also a flute!”

With this happy explanation of how he thought up the various curios that dotted the pages of his first book, Rock turns his attention back to the watercolour he’s busy with. We’re in his studio apartment in Prenzlauer Berg, Berlin, where I’m interrupting a day of intense painting. He’s in the middle of the most important, most defining panel of his second book, The Accountant (currently a working title), that happens to be about a pig who is dissatisfied with his lot in life as a number-crunching suit. Even though the panel isn’t finished yet, Rock’s style comes through clearly. Warm, with sepia tones through which colours seem to burst forth. And, of course, detailed. Very, very detailed.

In fact, the painting I am watching him work on has been patiently dabbed at and has received the deft strokes of a brush for close to a month now. It’s upon gleaning this piece of information that the ‘a week in the life of a children’s book illustrator’ story that I’ve been planning goes right out of the window. Because I learn that this is pretty much Rock’s week. Long hours painting at his desk. All day. Every day. Punctuated, on occasion, with a sudden existential conversation with Ichabod, his cat. But it’s these very hours, perhaps aided by the feline tête-à-tête, that lead to some very beautiful and rather mysterious picture book panels. Panels that help tell stories that appeal most certainly to children. But that also have quite an effect on adults.

Maybe this is understandable, given that adults had such a massive effect on Rock’s art when he was a child. “You know how when kids draw anything, grown-ups look at it and go, ‘Oh! That’s very, very good!’” Rock says in mock imitation of an enthusiastic adult. “I think the other kids caught on earlier than I did. I just thought, ‘Yeah, this elephant really rocks!’” he laughs. Of course, once convinced of the skill with which he could draw pachyderms and other animals, young Rock never put down his pencils. Soon after, he discovered the world of watercolours and the limitless possibilities that they offered him, and he never quite put down his brush.

Perhaps it was also Rock’s vicinity to Copperfield’s, a bookstore in Napa, California, where he grew up, that cemented his dream of telling stories through pictures rather firmly. The time he spent browsing through books there—he eventually even got a part-time job at the store—helped him realise his love for the written word and more so for illustrated books. He had come to that lovely and important conclusion that “Books could take you anywhere...”

And slowly the transition was made from a prolific reader—he read everything he could get his hands on from Franz Kafka to Jorge Luis Borges, from Fyodor Dostoyevsky to William Gibson, and from Neil Stephenson to every single one of Nicola Bayley’s illustrated cat books—to aspiring writer and illustrator. He also devoured every possible type of picture book from Nick Bantock’s Griffin & Sabine trilogy to Shaun Tan’s The Arrival and Art Spiegelman’s Maus. Years later, after working in copy writing for a while, he completed his MA in Children’s Book Illustration from Cambridge School of Art (Anglia Ruskin University), which, at 29, was his first formal course in art. Rock was now ready to take on the world. On a midnight stroll through Seattle, he chanced upon an antique bookstore and the idea of Homer Henry Hudson was born. This battle-scarred canine, blind in one eye, leaning heavily on a humble willow root cane for a crutch, with a mysterious past behind him and an undefined future that lay ahead.

One can’t help but wonder, other than a similarity in the socks that they wear, just how much of Homer Henry Hudson is Zack Rock himself? You see, Rock is a bright, happy personage. He’s got the air of an entertainer about him. And, seeing him speak, I often feel that I’m watching a Woody Allen movie with a character occasionally breaking the fourth wall. So it’s something of a surprise when he tells me that, as a child, he had an anxiety disorder which was so crippling that it meant he couldn’t leave home at one point for fear that all these unlikely but terrifying events might befall him. And so some of the things that Homer Henry Hudson appears to be going through in the book are versions of what Rock himself had to overcome as a child. “I wanted to do things. I wanted to go to Africa. I wanted to go to Australia. I wanted to do all these things. And I realised that the first step towards that was leaving the house and then more steps would follow,” he says.

Today, years later, and one book behind him, having lived in London and now Berlin (simply because he can!), it’s evident that Rock’s managed to leave the house, metaphorically and otherwise. But the theme of his work gives one the feeling that he still carries this burden of being an outsider... a misfit.

He laughs when I bring it up, telling me of how he was the president of his school’s Science Fiction Club. And how, after years of feeling slightly out of place, he discovered great thoughts, many universes and a multitude of emotions he could relate to when he read the works of great philosophers he discovered in bookstores. In a sense, books saved Rock. Which is also why the porcine protagonist of his second book, which is due to be published by Creative Editions in 2017, is also saved by a bookstore.

And while Rock uses that classic method of depicting an outsider by making his protagonists the only talking animals in a world full of humans, he’s ready, he says, to venture onto books with human beings as the central characters. Of course, he also has plans to write more in-depth novels for adults at some point, which he still wants to illustrate. “There’s really no story that doesn’t benefit from illustrations,” he smiles.

“What is going to make up the basis of your life? What is it going to be constructed out of? Is it going to be constructed out of fear? Or are you going to face the things you’re afraid of and be the person that you want to be? What are the stories that people are going to tell when you die?” Rock asks rhetorically in that typical fast-paced, nearly-running-out-of-breath way of his. These are the things his books centre around. These are the things he wants to make his readers wonder. And once he instills this wonder in them, well, the possibilities are endless.

To me, Rock isn’t a children’s book illustrator and author. Drop the ‘children’s’. He is a book illustrator and author. He tackles subjects that are difficult—existential crises, the question of identity, and the incapacitating power of fear. That he does it in the manner that he chooses makes him stand out. Children will find, upon seeing Homer Henry or Pig, a pair of loveable animals that they could quite simply squish the life out of. Grown-ups will find stories that urge them to confront whatever it is that is holding them back, coaxing them to move forward. The very discerning reader will closely look at each panel that Rock draws, and spot within them his biggest influences, whether it is a portrait of Kafka hanging on the wall, or Shaun Tan enjoying a meal in a sushi restaurant, and marvel at the Easter eggs he’s managed to tuck away into the book. Nearly all will come away inspired in some form or the other. But they will also be surprised.

Why, you ask? Because Zack Rock will have tricked them into thinking more deeply about their own lives and their own stories in so beguiling a manner. And he wouldn’t have it any other way. Like he says himself with a broad grin on his face, “There’s no story I think I can’t tell with a talking dog!”