When Rande Gerber set out to make a "house tequila" with his best friend, George Clooney, little did he know that Casamigos would become an award-winning spirit and one of the fastest-growing tequilas in America. Or that his wife, Cindy Crawford, would wake up in bed with the Oscar-winning actor 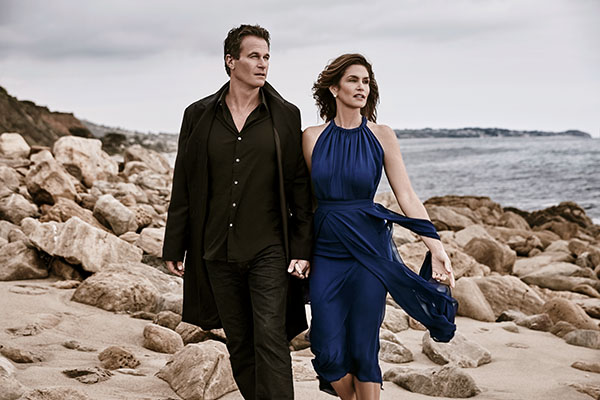 Among the many virtues of launching your own ultra-premium tequila are the hours you get to spend on ‘research’. After all, who better to test your agave alchemy than a focus group of your closest friends? Which is precisely how Casamigos was born.

Named after the twin vacation houses that Rande Gerber and his wife, Cindy Crawford, share with George Clooney in Cabo San Lucas, Mexico, Casamigos—a portmanteau of ‘House of Friends’ in Spanish—came to life because Gerber and Clooney couldn’t find a tequila that was up to their high standards.
“George and I had been spending a lot of time in Mexico while we were building our homes there,” says Gerber, the 52-year-old nightlife entrepreneur whose Gerber Group was behind such venues as The Whiskey in Miami and SkyBar in Los Angeles. “And as one does when they are in Mexico, we were drinking a lot of tequila. Every time we would go into the hotel bar, bartenders would recommend different types of tequilas, so we tried a lot of different ones. After a couple months of drinking what was probably every tequila in Mexico, George turned to me and said, ‘You know, why don’t we just make our own?’” 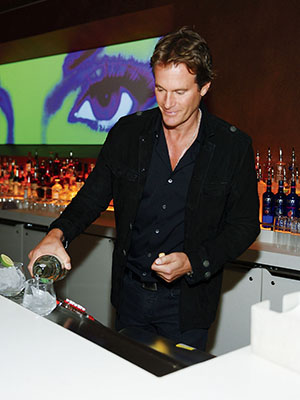 Image: David Needleman
Gerber at the Casamigos launch in 2013
So they did. After consulting with friends who lived in the area, the duo worked with a master distiller in Jalisco, Mexico, to find the exact flavour profile they were after—something with no burn or bite. Gerber and Clooney were partial to a Reposado—a mellow, balanced tequila, which is aged in oak barrels for several months—so that’s what they set out to make first.
“We spent a year and a half getting different samples until it was finally just perfect for us,” Gerber recalls. “We were so close so many times, but at the end of the day, we went through 700 bottles of samples. Fortunately, we had the time, the patience and the money to get it right.”
They ultimately settled on a blend of 100 percent Blue Weber agave that’s slow-cooked in a brick oven and given a long time to ferment. The result is an intensely smooth tequila whose flavour doesn’t have to be masked by salt and a lime. “Even my wife just drinks it on the rocks,” Gerber says. “And you don’t get hungover from it,” he swears.

“We didn’t know it at the time,” Gerber continues, “but when a guy from our distillery did an interview about what it was like to work with George and me, he said, ‘Well, it was fun working with them. They really know what they like, but they were definitely a pain in the ass.’”

Crawford, who has been married to Gerber since 1998, agrees with the assessment, as only a wife can. “I’ve never met anyone with such attention to detail,” the 48-year-old supermodel and mother of their two children says, adding, “I’m surprised I even made it past his filter! For me, 90 percent is good enough sometimes, because I don’t want to get slowed down searching for perfection. But Rande can’t help it—he is not satisfied until it is 100 percent perfect. When he was creating the barback T-shirts for his very first bar in New York, he spent six months getting them perfect. I would have had one conversation about it, and then I would have moved on.” 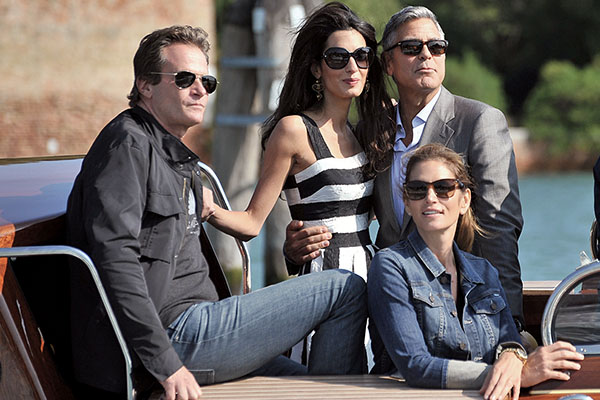 Image: David Needleman
With George Clooney and Amal Alamuddin at their wedding in September

Gerber and Clooney never had any intention of bringing their tequila to market when they first started their quest, but with the encouragement of their famous friends (and grateful taste testers), Casamigos was launched—with a third amigo, Discovery Land CEO Mike Meldman—in January 2013.

In two years, it has become one of the fastest-growing tequilas in the United States—already distributed in all 50 states, as well as in Canada, Mexico, the Bahamas and Hong Kong. In April, Sidney Frank Importing (the company that created Grey Goose) was named the exclusive importer of Casamigos in the United States and the Caribbean.

The tequila, which has already won several awards, also had a starring role at the Clooney-Amal Alamuddin wedding in September. Gerber flew 100 cases of Casamigos—which now includes a Blanco, aged for two months, and an Añejo, aged for 14—to Venice on the company jet for the festivities.
And though Gerber has been friends with Clooney for more than 20 years, he and Crawford are careful not to offer the newlyweds any marital wisdom. “I don’t really need to give him relationship advice, I think he’s doing just fine,” Gerber says. “He’s already figured it out. He’ll figure it out as time goes on even better.”
As for the secret to their own 16-year marriage, Crawford says, “Even when we are upset with each other, we never say things that you can’t take back, so there is less damage.” 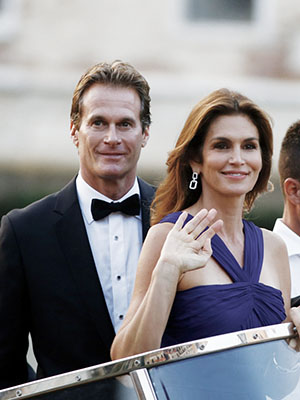 “We fight respectfully,” she says. “We are really different people, but he is the person that I want to spend the most time with. I think the biggest challenges for us are when we are designing houses together. That’s probably where we both have really strong opinions, and we bring it. But when we work through it, the end result ends up being even better because we both feel so passionately about it.” They will soon test that theory, as Crawford and Gerber are currently renovating their Malibu home, which she describes as her “happy place”—because “having the beach as our backyard really brings our family together.”
These days, Crawford has been particularly bonding with her daughter, Kaia, over a familiar passion—modelling. The 13-year-old, who looks like a younger version of Crawford (minus the signature mole), has already posed for Versace’s first children’s campaign. “Right now she’s just dabbling a little bit,” Crawford says, noting that she doesn’t offer Kaia guidance about posing, only career logistics. “I don’t give her any advice about modelling per se, because that’s just something you have to find within yourself. In terms of being in front of the camera, you either feel comfortable and want to learn those skills or you don’t.”

And given how the business has changed so dramatically since she first started, Crawford—who was once the highest-paid model in the world—believes that she would not have been as successful if she were entering the field today. 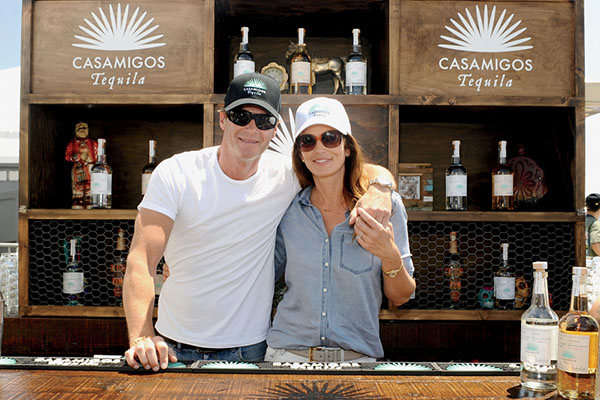 Image: David Needleman
Gerber and Crawford at a Casamigos-sponsored event for the Horsemen Flight Team last May

“I was not a superskinny girl,” she says. “But no one was at the time. You were allowed to have a fuller figure—I’m not a zero, I’m a six. There wasn’t even a zero back then!” While Crawford may have accepted her curves, she vividly remembers an instance when she struggled to fit into a pair of pants worn by Naomi Campbell. “I couldn’t get them up over my thighs,” she jokes. “But for the most part, my job was to fit the clothes, which I did, and make them look good, which I learned to do.”

And while Gerber has focussed on Casamigos (and his rum, Caliche), Crawford has expanded beyond modelling and devoted her entrepreneurial energies to her Meaningful Beauty skincare line, a signature home furnishing collection and a forthcoming book of essays and photographs celebrating her career.

Setting aside time for date nights often proves challenging, but the couple considers it crucial for the success of their marriage. “We work on our relationship. We take time for each other, even if it is just a walk on the beach,” she emphasises. Adds Gerber, “We don’t go to bed angry.” And sometimes, they don’t go to bed together at all.
Shortly after deciding to offer the brand to the public, Gerber and Clooney sat down with a bottle of their “house tequila” at Gerber’s Café Habana in Malibu to strategise their new business venture. What happened next became the inspiration for the first Casamigos commercial.
After polishing off the entire contents, neither man was in any condition to drive, so after getting a ride home, Gerber offered to let Clooney stay in his guest room. “Sometimes when I come home buzzed or a little bit drunk, I’ll sleep in one of my kids’ rooms,” he admits. “And I had walked into the master bedroom and noticed that they were in bed with Cindy, so I went in my son’s room and fell asleep in there.” 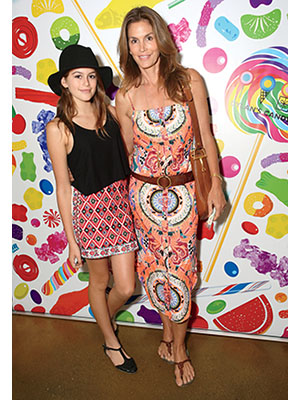 Crawford with daughter Kaia
With no sign of Gerber at 2 am, Crawford decided to check the guest room, where she saw a man fully clothed, reposado on top of the covers. “She gets into the bed, rubs my back, and says, ‘Hey, babe, why don’t you get undressed and into bed?’ And with that, George turned his head, and Cindy saw that it was him in there,” Gerber continues. “George thought he must’ve stumbled into the master bedroom and gotten into our bed!”
After Crawford finally discovered Gerber in their son’s room and relayed the embarrassing mix-up, the pair heard someone padding around downstairs.

Tweets by @forbesindia
La Dolce Vita In Genoa: A couple's trail in picturesque Italy
Louis Vuitton and the power of the logo