Letter from the Editor: The New, New Internet

If you cut through all the jargon, there's every reason to believe that the creeping changes of the Internet era are finally taking effect in our own backyard

The Internet boom of the late Nineties may have petered out by early 2000, but the Big Ideas that it threw up then may finally be coming to fruition. Exactly a decade ago, I remember interviewing Don Tapscott, a leading writer, consultant and speaker. He was among the pioneers who saw the rise of the Internet as nothing short of a revolution for both established and new businesses. Last month, Tapscott and Anthony D. Williams co-authored another business best-seller Macrowikinomics. It focuses on why industrial age firms may be reaching the end of their life cycle, and would have to be completely re-invented around a new set of principles and a networked model. 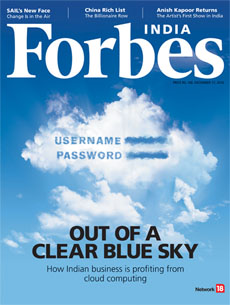 If you cut through all the jargon, there’s every reason to believe that the creeping changes of the Internet era are finally taking effect in our own backyard. There are many facets of that change. In our cover story, we pick up one of the biggest technological changes impacting the world of business: Cloud computing. The fact that increasingly all IT infrastructure — hardware, software and services — is now available on tap is helping Indian firms to scale up faster — and at a significantly lower capital cost. Back in the days of the Internet boom, the concept of a significantly de-capitalised business model had stirred our collective imagination. In India, the early adopters aren’t necessarily the big firms. Our team led by Deputy Editor Shishir Prasad, Associate Editor Seema Singh and Senior Assistant Editor Rohin Dharmakumar discovered scores of small and medium enterprises that were embracing cloud computing — and beginning to achieve extra-ordinary results. Read their story on page 40.

SAIL, India’s biggest steel maker, is on the brink of a massive transformation. Even as global and local competitors flex their muscles in India, SAIL desperately needs to expand capacity and up its technological prowess. Under its new chairman Chandra Shekhar Verma, the youngest in the company’s history, the company finally seems to have a handle on all its strategic issues. Curiously, Verma is a complete outsider to the steel industry. Will the fact that he has no baggage of the past enable him to take SAIL to the next level? Assistant Editor Prince Mathews Thomas examines his agenda on page 36.

It’s been such an action packed year that it’s hard to imagine that we’ve almost reached the end of it. Like last year, we’ve planned a year-end special edition that promises to be both fun and refreshing. Along with all the customary lists, we’ll also unveil all the amazing candidates for the Forbes India Person of the Year. There’s one surprise though: This year, we’ve also planned a specially crafted event in New Delhi on December 17 to launch the edition. Watch out for more details.