Letter from the Executive Editor: Less than 10 years ago, when Mukesh Ambani announced his plans for the mobile telephony space, it shook the business up. Now, he's back with a plan that sounds more intriguing and bolder

It is only fair I indulge in a bit of chest thumping first. Last July, just into the third issue of this magazine, we took a call on the markets. We argued that if you weren’t buying yet, you’re missing out on a pretty serious opportunity to create wealth. To put some skin into the game, we recommended 20 stocks that ought to be in your portfolio. One year down the line, as we go into press, I am delighted to inform you the portfolio we recommended has delivered average returns of 54 percent. As against this, the benchmark Nifty moved up 15 percent.

But because markets change and the variables that govern them change as well, T. Surendar and Pravin Palande, the men who wrote the report then, reckoned a review is in order. I must confess they’ve had a tough time over the last couple of weeks. Experts they’ve spoken with to understand what exactly is going on seem a divided lot on which way the winds are blowing. They persisted though and have spent several hours in conversations and trawling through mountains of data to come up with their Top 20 picks. 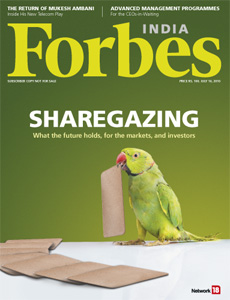 Like last year, I’m sure these recommendations will trigger a fresh bout of debate and slanging matches on whether or not the calls make sense. We welcome the debate and would love to listen to what you have to say.

The other story I’d urge you to read is that of the formidable Mukesh Ambani’s comeback into telecom. Less than 10 years ago, when he announced his plans for the mobile telephony space, it shook the business up. To a very large extent, the way the industry operates today is a function of some audacious calls he’d made then. A fractious family settlement compelled him to move out of the sector. Now that some of those issues have been resolved, he’s back — this time with a plan that sounds more intriguing and bolder than what he had originally thought up for Reliance Infocom.

Few people though seem to know what exactly he has in mind. Once again, T. Surendar picked up the gauntlet to meticulously piece together an account of how his strategy will play itself out. For Surendar, this story smacks of déjà vu. In an earlier avatar, in another magazine, he had written the first insider’s account of Mukesh Ambani’s telecom dream.
And finally, for those of you who’ve wondered often about what it takes to make the transition from a manager to a leader, Neelima Mahajan-Bansal has put together a special report that reviews the best advanced management programmes in the world. Think of it as essentials for the CEO-in-waiting.