Anu Aga: A House by the River

Anu Aga anchored the family business and took it forward when personal tragedy put her in the lead role. Work, in turn, proved to be her anchor 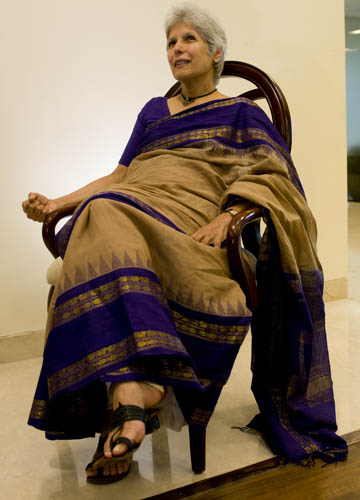 Image: Vikas Khot
“You are asking me, do I ever cry? Of course I do. But have I healed? Yes, I have.”
The river widens here in a serene silence. On this side of the bank are a few tall palm trees softly lit by lights below. Then all the way up till the large veranda is a stretch of well-maintained lawn. Behind it all is the beautifully ageing house that is home to Anu Aga.

She came here 35 years ago to build her nest with husband Rohinton, daughter Meher and son Kurush. The four lived in an almost fairytale world in which Rohinton worked to raise the family business at Thermax. Anu was by his side, managing human resources at some level, but content playing a largely supporting role. She was happy with her world. Then everything changed. “My daughter, a chemical engineer, had just married Pheroze. We asked whether they would like to go to England. We had a small outfit there which needed turnaround — it was not doing well. My R&D Director offered to help them, and together they turned it around. My promise to my daughter was that, when she became pregnant, I would spend six months with her. So I was with her in England when she was to deliver. I also said to myself that although I hadn’t taken interest in hard-core business issues thus far, after my return, I would push myself to do so. When I came back, destiny wanted something different, in a way.”

First, Rohinton Aga died. He had a massive stroke. But Anu Aga had no time to mourn.

“The board met in two days and suggested I be the chairperson. I wasn’t comfortable assuming this responsibility. Personally, I felt that I didn’t deserve the position and I felt very small within myself. I kept feeling that it is the 62 percent shares which we have that has given me this position, and not my merit. We had gone public a year earlier and our share was quoted at 7 times the issue price. In those days, it was very good — my husband had done a superb job. “And then came the downturn. My company didn’t do well at all. My executives kept telling me that when the market is down, we are bound to be affected. Have faith in us and if you, the largest shareholder can have patience, everything will be okay. I went along with that.

“One day, I got an anonymous letter from a shareholder. It said, ‘I do not know about your finances, Mrs. Aga — you may have enough or may not care for money, but you have let your shareholders down.’ I suddenly woke up! You can see how un-businesslike I was. Though we were a public limited company, it hadn’t dawned on me that I had responsibility towards others who were not majority shareholders. I couldn’t sleep that night. I felt I had let down people. That was one thing which my husband and I were very keen on — we will not knowingly let down people.”

Anu Aga started a full-scale reform, aided by Arun Maira of Boston Consulting Group. A series of tough decisions were required and she proved to be a tough cookie. She was on her way.

Somewhere deep inside her, Anu Aga owed it to both her past and her future. The company was started by her father; her husband had transformed it from a family run, small business into a professionally run engineering organisation of formidable repute. Both men were gone. Destiny required her to be the bridge of resolve between that past and the future.

Little did she know there was greater pain in store. Barely a year after Rohinton’s death, and all within a fortnight of each other, her mother-in-law died, the family pet died and as if that was not cruel enough, while driving back from Bangalore after fixing a customer’s faulty boiler to regain a lost order, son Kurush met with a fatal accident.

This time, Anu Aga mourned for three weeks. Then she returned to work.

Between 1996 and 2004, Thermax shed its unrelated investments in areas from software to drinking water, it dramatically reconstituted the board to bring in fresh new perspective, and went on an enviable growth spree led by a fragile looking woman in a male-dominated, engineering world. In 2004, she decided to hand over the legacy to the future. She had taken over a company with Rs. 605 crore in turnover. Eight years later, she passed on a Thermax with a turnover of Rs. 1,281 crore to daughter Meher.

“She is a wonderful person. She is an engineer, she understands the business; finance-wise, she is very good. I was hopeless. Meher carries my values. She has proven herself and far surpassed me. It’s a delight because she is my daughter and I don’t feel threatened.”

So, today the Rs. 3,250 crore company with a market cap of Rs. 3,683 crore has the sympathisers and the sceptics asking, where did she find her strength?

“Vipassana helped. I went to learn Vipassana. I had always wanted to do it but it required the rigour of maintaining silence for 10 days. My husband used to always tease me that I could never keep my mouth shut for 10 days.”

Vipassana is a form of meditation the Buddha taught. A 10-day initiation requires celibacy and complete silence. It begins with what the Buddha called Shila (good conduct), followed by Samadhi (state of equilibrium) and emerges with Pannya in which the gains of self-knowledge become externalised. During the process of deep self-reflection, the mind learns to recognise its sankharas — accumulated burden of pain and deal with the transience of pain and pleasure as mere sensations that the Buddha called anichya.

“In my deeply personal way, I learnt to deal with death and today, I am completely at peace with the idea of death.”

“But, have you really healed, Anu?” I hear myself ask.

I do not want to question the finality of that resolve. Actually, I do not want to talk. Outside, darkness has enveloped the banks of the river, the palm trees are asleep and I can hear the sound of silence.
“I have to go now,” I tell Anu.

She gets up; we hold hands for a brief moment. She gives me a soft hug. She pats my cheek affectionately and then I step into the night.

(This story appears in the 31 July, 2009 issue of Forbes India. To visit our Archives, click here.)

Get the latest stories, videos, and podcasts from Forbes India directly in your inbox every Saturday
Thank you for your comment, we value your opinion and the time you took to write to us!
Comments 9