Raju Narisetti, the editor who came to India from the US to nurture business newspaper Mint, has gone back and joined The Washington Post. Forbes India wonders why and decides to ask Narisetti

Name: Raju Narisetti
Title: Managing Editor, The Washington Post
Age: 43
Career: With The Washington Post since January 2009. Founding editor of Mint (2007-09). Was with the Wall Street Journal from 1994-2006
Interests: Inch deep and a mile wide in almost everything

You left Mint and stopped blogging without as much as a goodbye to your readers. The newspaper is still a work in progress. Could you tell us about the circumstances that made you leave Mint after a relatively short stint of two years?
Mint published a Need to Know (a news section in the newspaper) item about the changes and HT Media put out a detailed announcement for its staff. There was a note about the blog ending, all of which add up to more than a goodbye don't you think?
At Mint we always believed that individuals, especially editors, can't be larger than the institutions they work for, so I believed that was appropriate coverage of the news.
The succession planning process was always carefully thought through from the time Mint's Editorial Leadership Team was put together. In the Fall of 2008, it became very clear to me that key members of the team were ready and rearing to take on larger roles. I initiated the transition conversation with Rajiv Verma and Shobhana Bhartia and they eventually saw the logic in it. I have always believed my role was to set the course but not to steer the ship forever. And I didn't see any significant opportunities--during a downturn--for me to personally transition to within HT that would appeal to me. Rather than hold off smart successors because I had nothing else to do, I decided to look for jobs outside Mint. That I didn't have anything specific lined up when I stepped down didn't bother me as I could have actually used the break after nearly three all-consuming years in India.  Maybe it is unusual in India to have clear succession planning and voluntary transitions of power. That it was handled very professionally--without usual leaks and rumours-- by HT Media was perhaps why some were surprised and needed a backstory to fill their conspiracy theories. That Mrs Bhartia and I agreed early it wasn't our job to address all the outside gossip--mostly by ill-informed journalists unwilling to ask us for the facts before publishing their blogs--probably added to the rumours. To me, what mattered was the roadmap and foundation for Mint that was set early and deep. All newspapers should always be a "work in progress" so leaving one anytime ought to feel difficult. And Mint is so much a part of me that I don't feel like we have parted ways. 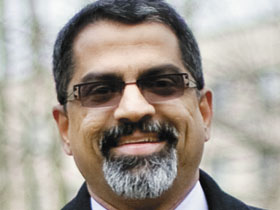 Image: Sebastian John for Forbes India
Narisetti has begun a new journey at the Washington Post
You told an interviewer before coming to India to start Mint that your biggest challenge was going to be creating a form of journalism that was different. ``There is not enough of stepping back and looking forward -- lighthouse reporting, as opposed to lamppost reporting," you had said. How far, in your assessment, did you live up to the challenge?
Mint's larger readership and its success in creating distinct and sustained ethical--I underscore the honest journalism part-- business journalism is clear evidence of what can be done with perseverance and a willingness to work hard.  And that it was done with an almost-entirely Indian staff of young journalists deep within an Indian media house, in a competitive environment is proof that the model can and will work. I would give Mint a solid B+ now, up from a D when we started, and getting better each passing month.  I have little reason to believe it won't remain the quality journalism offering that it is now in the future as well under editors Sukumar, Niranjan, and Durga Raghunath (the livemint.com managing editor).


A little over a year after Mint started publishing, you said in an interview about Indian newspapers’ building credibility: "I'm sorry to say that, but the general consensus in India seems to be that readers don't care, so it doesn't matter." How did the HT Media group and the industry receive steps taken by Mint to build credibility?
If I were to do it all over again I would do a few things differently for sure. But I would absolutely do it for HT Media. Most other media houses or owners don't have the courage of their convictions--or true convictions--to allow a Mint to be what it was. There was not a single instance when Mint couldn't run a story it wanted to, or seek anyone's permission despite significant attempts throughout the two years by many companies and politicians to try and prevent some stories, using influence, friendships, threats or legal notices. Or advertising that was pulled including from HT. That we were willing to admit and correct honest mistakes and went out of our way to try and be fair, especially in giving a voice to all sides of the story, helped build internal credibility, giving management the right reasons to avoid interfering with Mint's journalism. Indian industry remains too thin skinned and its owners too full of themselves to realize there is a place for critical business journalism that isn't negative or has no agenda. And that most media houses play along doesn't make the job of honest journalism any easier.

Was it difficult to enforce the Mint code of ethics? Were journalists receptive to the idea?
We had the luxury of being a start-up where no one had a choice to adhere to or not, especially since it began at the very top and percolated all the way down. I believe it is a significant asset for Mint, something that unites our journalists and underscores their journalism. And it certainly helps with readers. Whether it has any special appeal to the business side is something that only time can prove or disprove. But there simply can't be any other way to practise journalism at Mint. It is the DNA of that paper.
What was your experience of engaging with industrialists (including the owners of Mint) and government during your two years in India as the editor of a business newspaper?
It wasn't easy especially because there was no critical mass of such journalism and lots of competition that didn't give two hoots for speaking truth to power. So Mint journalists had to work harder than most other business journalists to see their stories in print. In return they were backed 100% when we had the right reporting and facts. The India psyche is still quite unwilling to be critical of its own behaviour, which unfortunately holds India back from achieving more success. Good journalism has a key role to play in changing this.
At Mint, you took a conscious decision to invest in new media like internet radio, online and video far ahead of its time. Was it to simply build an integrated Mint brand--or did it make real business sense?
India has the hindsight of being able to see where newspapers are generally headed world over. If you are foolish enough to start a new newspaper in 2007 as I was, you absolutely must think of offering your journalism where audiences want it, when they want it. Mint was deliberately conceived as a multimedia, multi platform integrated news offering. HT Media wasn't expecting Mint to make money for about 3-4 years so whether all these pioneering efforts will be profitable depends on the parent company's courage of convictions and willingness to build on early brand success. The product is good and it is sticky. That is the most you can expect from a newsroom.
Having worked across many media markets around the world, how do you rate the quality of journalism practised here in India?
Good journalists by instinct but poor journalism because of practices, weak institutions, zero standards and ethics enforcement--voluntary or otherwise. Many business journalists want to be part of the business establishment or be close to it. That results in journalism that isn't about readers. Even the best--and there are just one or two such institutions--journalism schools are not graduating grounded journalists. That will be the soft spot of India journalism for some time to come.
Numerous business models are being discussed to salvage the print business in the US. In your mind, what's the best course of action? Is there a case for the society to bear the cost of protecting the fourth pillar of democracy?
If you are asking whether the print business deserves a bailout, my answer is an unequivocal no. During their heydays most media companies didn't invest in technologies or in making sure young people realized the value of the journalism that print newsrooms produced. Now we have newsrooms with costs and behavioural structures that can't be sustained. So there will be a lot of pain, but from it will emerge profitable models. I don't have pat answers but know what needs to change.
What are the chances of long-term survival of the Propublica model?
I trust Paul Steiger's journalism without any hesitation. I am not sure investigative journalism lends itself to a lot of cooperative behaviour across media companies. But cooperative journalism models will be one way out of the current fix we all find ourselves in.