Is a Gold Bubble Building Up?

Contrarian investment advisor Marc Faber is at his incredulous best when the markets are in a bull frenzy. Gold prices surged recently to record levels. T. Surendar asks him if he sees a bubble round the corner

Recently, you said that gold, as an asset class, will surpass the Dow Jones Industrial Average. What factors can influence such a performance?
The worse the economy becomes, the more money will be printed. Therefore, inflation will at some point follow. Moreover, should the economy recover sometime in future — in  my opinion, not for a long time — it is unlikely that the Fed will increase interest rates above nominal GDP growth. Consumer price inflation will therefore follow. Consequently, I expect a further loss in the purchasing power of paper money and a continuation of the outperformance of gold compared to the Dow Jones as has been the case since 1999. However, if money printing and fiscal deficits fail to lift asset markets and stimulate the economy, it is likely that the Dow could decline to 4,000 points. This would entail a strongly deflationary environment in which many financial institutions and companies would fail. In this condition, I would expect investors to push up the price of gold in a flight to safety.

Like in crude oil, paper trading has increased in gold, leading to higher speculation. Will gold prices fall from a cliff?
There is undoubtedly some speculation in the gold market. But where not? However, I see a lot of gold moving into storage such as into safe deposit boxes. These holders are unlikely to sell any time soon. Also, when interest rates are close to zero, the opportunity cost to hold gold as a currency whose supply cannot be increased, is low. I should add that Asian central banks hardly own any gold. They could become large buyers sometime
in future. 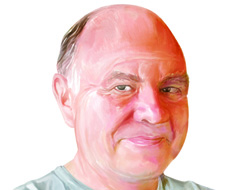 Image: Vidyanand Kamat
Marc Faber
What are the indicators to predict that the bull run in gold is coming to an end?
When the whole world will be trading gold 24 hours a day, as was the case in 1979-80, then we shall have a strong sell signal. I would also regard heavy buying of gold by incompetent central banks, which sold their gold below $300, such as the Bank of England and the Swiss National Bank, to be a sell signal. Now gold is very expensive compared to the CRB Index. As a result, some near term further weakness should be expected. Bull markets can be interrupted by deep correction. Between December 1974 and August 1976, gold fell before rising another 8-times later. The 1974-76 gold correction was accompanied by a strong recovery in stocks. So, if stocks rebound, gold could come under some temporary pressure. Still, paper money’s purchasing power will continue to decrease and, therefore, every responsible citizen should become his or her own Central Bank by owning some gold.  Marc Faber
Title: Editor, The Gloom, Boom and Doom Report
Age: 53
Career: Worked for White Weld & Company in New York, Zürich, and Hong Kong. Managing Director at Drexel Burnham Lambert, Hong Kong. Later, set up his own enterprise, Marc Faber Ltd. Has gained a reputation as a contrarian investor
Education: Ph.D. in Economics, University of  Zurich
Interests: Collects old communist memorabilia and assorted antiques like clocks

Tweets by @forbes_india
What's OK to Steal from My Hotel Room?
The Boom Banker