With his looks and legacy, Ranbir Kapoor could have easily made the conventional, romantic hero slot his own. Instead, the actor is traversing a variety of roles, choosing them with deliberation and to a plan 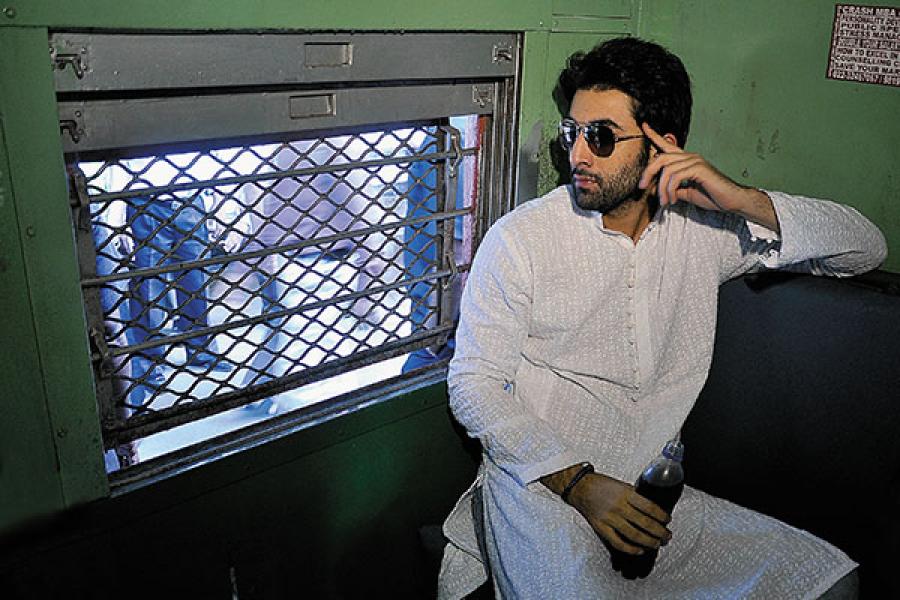 It has never been an easy task to get hold of Ranbir Kapoor. Ask his mother, actress Neetu Kapoor. For years, he would kiss her goodnight and trudge upstairs to his room. She thought he was going to sleep, when actually he would be getting ready to sneak out of the house. “She could never catch me because I planned well,” Kapoor, 31, had said while promoting his most recent release Besharam. “I knew what time she would call the security to check, what time my dad and she would sleep.” The cheeky grin accompanying this confession distracts most of us from what this little story reveals about the actor. Ranbir Kapoor has a plan.

In 2013, some would argue the grand plan has had mixed results. He has delivered one of the biggest hits of the year as well as one of the most disappointing flops. For the first time since his debut in Sanjay Leela Bhansali’s Saawariya in 2007, Kapoor was seen looking uncomfortable on screen as he played the over-the-top car thief Babli in Besharam. His wardrobe was ugly, his performance was overdone and the film was a disaster.

Yet, considering the success of kitschy good-bad guys who have ruled the box office of late, it isn’t difficult to understand why Kapoor took on this project. It was written and directed by Abhinav Kashyap, the man credited with thinking up Dabangg, the film that tapped into the audience's love for vintage Bollywood and made crass cool again. The film was, for all practical purposes, a single-starrer, which meant that if it worked at the box office, the glory would be Ranbir's alone.

(The only actors who could come close to sharing the limelight with Ranbir in Besharam were his parents, Neetu and Rishi Kapoor, who were part of the film’s supporting cast.) It was set in small-town north India, which is an important region for box office collections. If Ranbir was going to really cement his status as a blockbuster hero, he needed to find his inner Chulbul Pandey and, on paper, Besharam was the perfect medium.

Unfortunately, the film fared miserably at the box office. While the audience had lapped up the urbane Bunny of Yeh Jawaani Hai Deewani, it wasn’t convinced by Ranbir as Babli. “People said Besharam looked bad and all that but no one could have guessed that it will do as badly as it did,” said one executive who had worked on the film. “It has got nothing to do with it being a bad film as critics put it. Critics never like anything. It was a miscalculation by Ranbir. He is too classy for that kind of role.”

As one of the scions of the Kapoor clan, there is no doubt that class is something Ranbir Kapoor has in spades. As great grandson of Prithviraj Kapoor, grandson of Raj Kapoor, son of Rishi (and Neetu) Kapoor, cousin of Kareena Kapoor Khan and now a cousin in-law of Saif Ali Khan, Ranbir is Bollywood royalty. With his lineage, it seems inevitable that Ranbir became an actor. However, he took his time to enter Bollywood.

Most of the actors in his family made their debuts in their teens. Ranbir assisted Rishi Kapoor in Aa Ab Laut Chalen when he was 17. But that was more a bonding period between father and son than a professional assignment. Ranbir entered the film industry in earnest at the age of 23, after studying film and acting in the US. He assisted Sanjay Leela Bhansali in Black and was picked for the lead in Saawariya.

At the time, Ranbir was 25 and still got pocket money—Rs 1,500 a week—from his mother. Six years later, he continues to live at home but given the rumours that his fee for Besharam was in the range of Rs 20 crore, it seems fair to assume he doesn’t need an allowance from Neetu Kapoor anymore.

The box office performance of Besharam notwithstanding, Ranbir is one of the biggest stars in Bollywood today. His cheerfully candid admission that he dreams of the day when legendary actor and director Raj Kapoor will be known as Ranbir Kapoor’s grandfather doesn’t seem an impossibility.

Until Ranbir and Kareena entered the Bollywood fray, it looked like it was time to relegate the Kapoor family to Bollywood history. But these two young actors have imbued the family name with their successes. And while Kareena seems content with acting, Ranbir has already turned to production with Jagga Jasoos, in collaboration with director Anurag Basu.

Barfi!’s unexpected success helped crown Ranbir as Bollywood’s golden boy. But the journey to superstardom has had its share of bumps and potholes. His debut film Saawariya saw him in a role that caricatured his grandfather’s Chaplin-inspired look; also, courtesy the infamous picturisation of the song Jab Se Tere Naina (Ranbir’s character is seen flashing on his balcony and almost dropping the towel wrapped around his hips), the film’s lasting gift to the actor has been towel-themed jokes that he still can’t shake off. It was a resounding flop and his next two films didn’t fare much better. Wake Up Sid, directed by Ranbir’s friend Ayan Mukerji, was a turning point for Ranbir—his acting skills were finally noticed. But while the film was praised by critics, it didn’t earn much love from cinema-goers.

By this time, Ranbir was a favourite of the paparazzi and had garnered a solid fan following, largely due to his good looks and playboy reputation, but he desperately needed a hit. The success of Ajab Prem Ki Ghazab Kahani set the actor’s career on track. He went on to win best actor awards for his performances in Barfi! and Rockstar. Both films were hits, with Barfi! propelling him into the Rs 100-crore club. Yeh Jawaani Hai Deewani in 2013 too grossed over Rs 100 crore. That success has gone a fair distance in dulling the sting of Besharam’s failure.

Assess Ranbir’s career so far and it is interesting to see how carefully he has alternated between masala films and those that are more challenging. In an industry that is plagued by hackneyed plots and stereotypical characters, Ranbir’s filmography traverses a variety of genres as well as types, revealing how carefully he has picked his films. These aren't whimsical decisions: They are more like chess moves, designed to take Ranbir from strength to strength.

He had, what would be considered by many, a dream debut: A film with Sanjay Leela Bhansali. Then came the pulpy romance Bachna Ae Haseeno, followed by the offbeat Wake Up Sid, which with its exploration of upper middle class in urban India was the first touch of realism in Ranbir’s work. Next, he showcased his comic skills in Ajab Prem…, an unabashedly frothy blockbuster that offered no challenges to either the actor or the audience. But there was nothing light-hearted about his next film—Rocket Singh: Salesman of the Year, a little gem directed by Shimit Amin. Harpreet, or Rocket Singh, is Ranbir’s best acting performance till date, showing off his remarkable ability to slip into a character that is completely unlike him in every possible way, beginning with the turban and beard that obscured his famous face.

In Raajneeti, Ranbir tried his hand at a political thriller. With this, he not only showed that he could hold his own in a multi-starrer, but that he could also establish himself as the hero in the company of senior actors. Barfi! was decidedly ‘arty’ and it offered him his most challenging role so far. Ranbir played a hero who had to be charming despite being both deaf and mute. He also had to age because the story spanned a few decades. This year, the romantic hero got an update via his role as Bunny in Yeh Jawaani Hai Deewani and in Besharam, he tried to go rustic, but with little luck. Box office success and pay packets aside, it is a remarkable range in a relatively short career of six years.

His success has been preceded by much anticipation, and from some unexpected quarters.

Just after Saawariya was released, Dilip Kumar went to meet Ranbir but the legendary actor did not enter the Kapoor home. He stood at the gate and asked the guard to call Ranbir who rushed down. The old man sat him down on the road and said, “I give you a lot of blessings because I see a lot of Raj [Kapoor] in you.” It is too early to know whether Ranbir will live up to these expectations, but from the decisions he has made so far, it is evident he is going to give it his best shot.

Tweets by @forbesindia
The Movers & Shakers of Film Production
I'm Not a Huge Fan of 100-Crore Films: John Abraham