I'm Not a Huge Fan of 100-Crore Films: John Abraham

John Abraham has had an unconventional but successful career. A late entrant into modelling but an early starter in production, the 40-year-old says he wants to cater to a widening audience palette 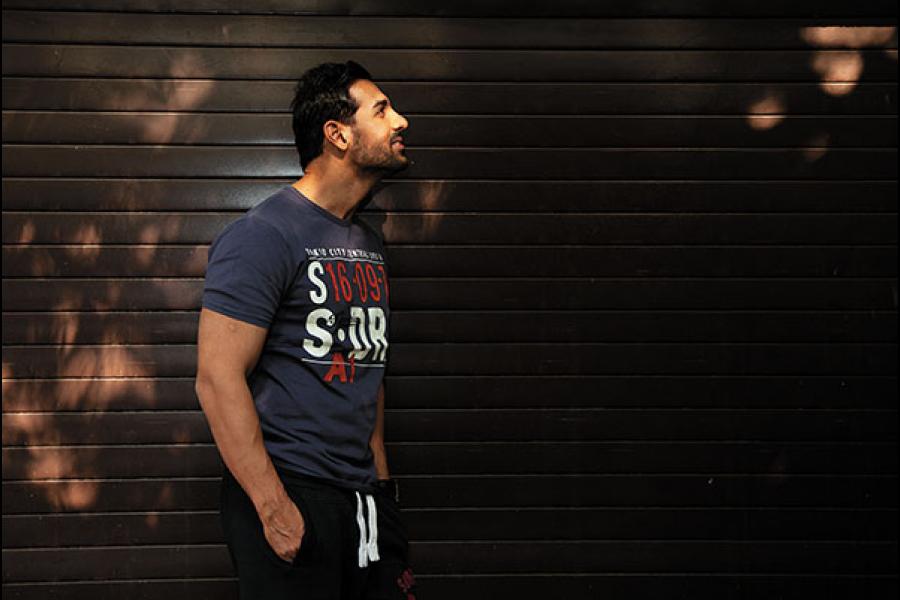 In 1997, at the age of 26, I walked on the ramp for the first time. It was an unconventional move as most models enter the profession at the age of 21 or so. And here I was—someone who already had an MBA, a job with an advertising agency and reasonably certain that I wanted to get into media planning. Up until then, I had had a fairly run-of-the-mill childhood. I went to school at Bombay Scottish and got an economics degree from Jai Hind College. After that, I did an MBA. My first job was with an advertising agency called Enterprise Nexus where I was a strategic planner. I was very sure of what I wanted: To head an agency and handle accounts.

I entered modelling with the same focus. All I wanted was to be the best model there is. Many models entered the profession as a means to get entry into Bollywood but I never looked at it that way. I didn’t even leave my job. The folks at Enterprise were kind enough to give me a sabbatical. For the next four years, modelling was all I did. Then, in 2003, at the age of 30, my life took another turn.

However, all that came crumbling down when my next four films failed at the box office. That was when I decided to work harder as an actor. When a particular thing didn’t work, I changed the genre of the films I acted in. And looking back, that did make a difference. I was always a subtle actor and not one who overacted. This was not appreciated at that time but I can see that, over the years, it has been noticed and looked upon favourably.

But this period also allowed me to reflect—to look at the films I wanted to be a part of. In 2005, Water (a film by Deepa Mehta) gave me a tremendous platform to showcase my work. What gave me particular joy was that my work was liked and appreciated by great directors like Steven Spielberg. But then, the moment I got back to India, I was typecast as a model. Welcome back to India is what I said to myself.

Looking back at those years I can say with some degree of conviction that if given a choice, I wouldn’t have done those films. If I were to live through that period again, I would have done just 10 films but those would be the ones I really wanted to do. I am not a huge fan of Rs 100-crore films as they are too formulaic— get an A-list cast or a successful franchise or a list of great songs and one can be reasonably certain that the film will do Rs 100-crore plus. Sure it feels nice to be in that club but I am okay if the film has a great story but makes less money.

Last year, I made my debut as a producer through the film Vicky Donor. Some would say I got into production a little too early but the reason why I did that was to improve the quality of films that were being made. I was dismayed by the fact that while the amount of commerce in Bollywood was growing, the quality of films is not. If I can make a small dent in helping India rank as a great film producing nation, I will consider my work a success. And by that I don’t mean to compare us to just Hollywood but also to, say, Korean or Iranian cinema.

Some would say we took a risk with Vicky Donor but I don’t see it that way. Shoojit (Sircar) and I saw Ayushmann (Khurrana) who plays the lead role in the film and decided to cast him immediately. I knew he had it in him and also that we had a winner as a story albeit on a subject that not a lot of people like to speak about.

While marketing the film, we also adopted a slightly unconventional approach. I knew it would do well through word-of-mouth, so we managed our promotion spends in a calibrated manner. We kept 60 percent of the budget for before the movie released and the balance 40 percent to give it that push when people started talking about it.

Sure the movie got off to a slow start. It did, I think, Rs 2.5 crore on the opening weekend, but we have done fantastically well since then. (Industry sources say Vicky Donor made Rs 60 crore as against a cost of Rs 4.25 crore.)

Our release this year, Madras Café, was once again an unconventional hit. The research agency we hired said the movie would not get past the first show but we junked those findings and went ahead with it anyway and made money. And this for a film that does not have a single song and dance sequence!

The simplest thing for me to have done in Madras Café was to have taken off my shirt but I made sure I played what my character demanded and did not try and force fit anything.

As a producer, I am absolutely clear that what Indians expect from films is going to go through a massive change. In the next two-three years, films with song and dance sequences will reduce significantly and there will be a lot more emphasis on story-telling. I have scriptwriters who come with scenes like “and then we will have an intermission here” or “the first three minutes after the interval have to be slow as people are still walking in with their popcorn”, and I send them away. Most Rs 100-crore films are these kinds of proposals and I don’t see us doing such projects. I would like us to be smart in the way we choose our films. Even if we make, say, Rs 50 crore for a film, I am happy with having at least half the audience of a Rs 100-crore film. I firmly believe that this audience will grow in the years to come and stand us in good stead.

The way I see it is, there is a huge audience in Tier II and III cities. They are used to going out every weekend to the cinemas. On that day, they watch the big release of that weekend. So, essentially, they are getting their daal chaawal. Why don’t I, through the films I make, try and give them a different dish. What’s the worst that will happen? They’ll spit it out. But, at least, we’d have laid the path for other producers.