A master of the cult song, Sukhwinder Singh has charted a path quite different from the typical Bollywood singer 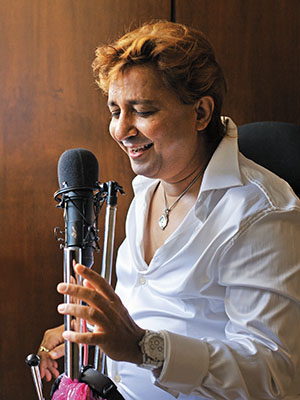 The interview began with a flash of white. Sukhwinder Singh appeared before us asking, “How does this look? I wanted to be in white for these photographs. White is the colour of Saraswati [the goddess of learning],” even as he fussed over his all-white outfit. The singer’s dressing sense would have given Jeetendra, the actor from the eighties known for his proclivity for white, a serious run for his money. Sukhwinder then quickly puts on the air conditioning to full blast, saying he needs to cool down. He blames the heat on the long steam bath he had that afternoon. Meanwhile, his two Pomeranian dogs start to bark. “This is my family,” says Sukhwinder as he makes himself comfortable for what promises to be an interesting Sunday afternoon for us.  The 42-year-old has been a maverick presence in the Hindi film industry since his debut in 1986, when he sang a few lines in Subhash Ghai’s blockbuster Karma. He has come far since: It would be fair to say that many of Bollywood’s cult songs in the last couple of decades can be attributed to Sukhwinder: From ‘Chhaiyya Chhaiyya’ (Dil Se) in
1998 to ‘Ramta Jogi’ (Taal) in 1999 and to the more recent slow-motion ‘Angreza’ (Bhaag Milkha Bhaag) last year.

But the hits didn’t just fall into his lap. He had to slowly work his way into the limelight. His process included travelling around the world and understanding different forms of music. Much of his time was spent in the US and the UK. This exposure was invaluable: He was able to incorporate new styles into his music when he finally came back to Bollywood and worked with AR Rahman in creating the iconic ‘Chhaiyaa Chhaiyya’. “I always had that song inside me since I was four years old. I had dreamt it and I had whistled it,” he says.

Though there are newer and more prolific singers emerging in the industry just about every year, he continues to be sought after for two reasons: One, his versatile voice and, two, his skills as a music director. However, he has paced himself in Bollywood, not over-crowding himself with assignments. Instead, he prefers to spend at least half his time travelling across the globe for concerts; he intersperses this with recordings for some of his favourite musicians. And Sukhwinder has met with a remarkable response from the international market—around 50 percent of his audience are non-Indians. This is true in Canada but particularly in the UK, where he really started his music career.

Sukhwinder stops the English music that is booming out of his Sony music system and says: “I must be the first guy to release a Punjabi album in the UK market way back in the early nineties. It was called ‘Munda South Hall Da’. We recorded in East Africa as well as in Russia and Morocco.” Those were the days when music took some time to travel to Indian shores. While he wanted the album to become a hit in his home country, Sukhwinder’s focus was to ensure that his voice reached a new composer, AR Rahman.

He had heard Rahman’s music and was keen on working with him. So, with the help of some friends, he arranged to send a copy of his album to the musician. “Rahman then did call me but for a different purpose. He wanted a writer,” says Sukhwinder.

He asked Sukhwinder if he could write a song for a Govind Nihalani movie, called Thakshak. Sukhwinder had not attempted this kind of assignment before but he decided to take on the challenge and wrote ‘Mujhe Rang De’; the music director was AR Rahman. The song was a hit and also marked the beginning of their friendship.

Later, he introduced Rahman to Peer Baba Bulleh Shah, a 15th century Sufi poet. Sukhwinder had heard some verses at a dargah and wanted to recite them to Rahman: That went on to become the first building block for the cult song ‘Thaiyya Thaiyya’ in Punjabi, which was later rewritten by Gulzar for Dil Se as ‘Chhaiyya Chhaiyya’.

After this was recorded, Rahman immediately asked him to perform another number, this time for SP Balasubramanian, a noted singer in the Tamil film industry. Rahman was acting in a film with Nagarjuna and felt that Sukhwinder could be his back-up singing voice. The film, Ratchagan, also starred Sushmita Sen who had just won the title of Miss Universe. But Sukhwinder did not know Tamil.

“[Mahatma] Gandhi never knew Sanskrit—someone challenged him to learn that language. But within a month he practised and was able to communicate in Sanskrit. How did he do it? His motto was ‘one time, one job’. I cancelled everything and set out to learn Tamil,” says Sukhwinder.

One time, one job: That has also been Sukhwinder’s approach. He doesn’t like to mix composing with singing in any project. Rahman had to force him to buy some equipment to set up a music recording studio at his residence as he knew that Sukhwinder would do justice to it, and that has helped his music. He has composed for seven movies that include Rakta Charitra and Astitva. In most cases, directors who were looking for a different sound approached him and liked what he had to offer.

The new trend of music directors trying to be singers so that they can make more money out of live performances disturbs him. “They are gifted in something else. Why are they wasting their talent on something that is not their area of expertise?” Sukhwinder says.

His passion, he says, is singing, and today he is working hard to create a show that is more of an international act as his audience becomes increasingly global. He even wants to include jazz and opera in his shows because he feels that music doesn’t really have a language.

For instance, when Deepa Mehta told him that she is doing a film called Monsoon Wedding based in Delhi, he said that he had a song that might interest her. But she said that it was an international project and a Punjabi song may not work for the audience. But she eventually included ‘Kawa Kawa’, which went viral amongst the American crowd.

It is speculated that Sukhwinder practises singing while running on the treadmill so as to maintain the quality of his voice. “I eat and drink everything that comes my way and do breathing exercises to help my voice,” he says. “Practice is a must. But I don’t do these kinds of stunts.”