The companion robot built by Emotix entertains and educates kids 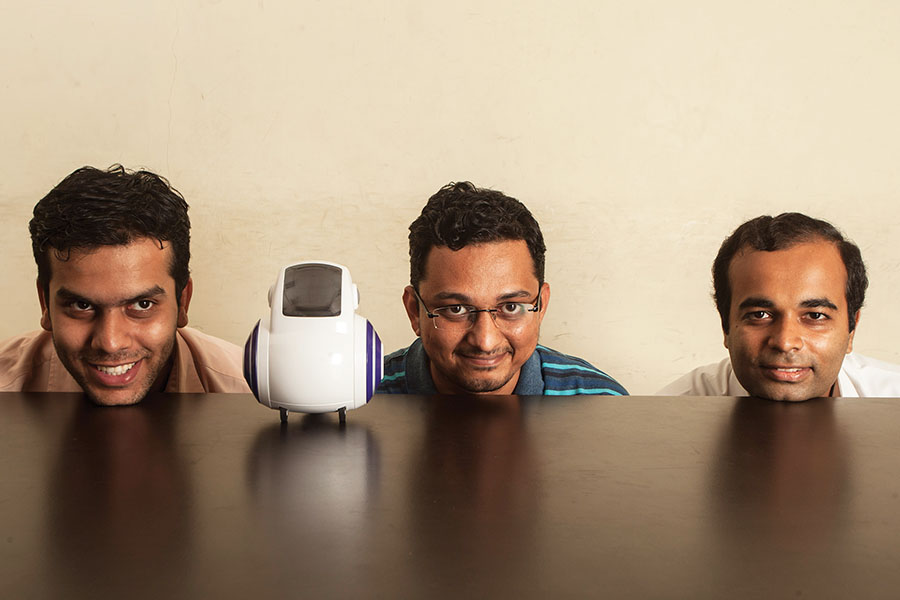 Five years of studying and working on projects together out of a garage-like space at IIT-Bombay meant they were clear about starting a company together. They just didn’t know what consumer product to begin with.

The founders of Emotix—Sneh Vaswani, 28, CEO; Prashant Iyengar, 33, CTO; and Chintan Raikar, 28, COO—finally settled on a completely new category with Miko, a companion robot for kids that can answer questions, tell jokes, ask riddles, and initiate conversations, all the while getting better as it interacts with the child. “We were interested in solving a documented consumer problem… so we got into the consumer space and the parent-child relationship caught our interest,” says Vaswani, who worked in three different sectors after college to sharpen his skills before Emotix was incorporated in January 2015.
Iyengar and Vaswani were in Bengaluru when they witnessed a mother screaming at her child about “leaving a game of Temple Run he was obsessed with”. An almost-three-hour conversation later, they figured that parents didn’t want to cut out children completely from technology, but needed “a trusted gateway of technology for their kids that caters to their learning and development needs”, says Vaswani.
Their college projects—the three had participated in several international robotics tournaments—came in handy. They created the AI framework for Miko ground up “because we were looking at certain features that are not there in any product across the globe,” adds Vaswani.
When a parent instals the company’s app on a device, Miko gets customised to that account. As more interactions happen, the system, both a local and central one, keeps getting better. “If you ask a question today and suppose Miko doesn’t know the answer, it will tell you, ‘Sorry, I don’t know the answer’. Say, a few days down the line if someone else asks that question in another part of the world, there’s a good possibility that it will know the answer,” says Vaswani as he demonstrates an interaction with the 18-cm tall Miko at his office in Parel, central Mumbai.

Initially funded by family and friends, Emotix raised ₹4 crore in June-July 2016 from a group of angel investors. The product went through several iterations before the founders finally released a video about Miko on social media on November 7, 2016.

Demonetisation came a day later, and though they feared a setback they were soon receiving pre-orders. Since October 2017 Miko has been selling on ecommerce sites as well as in toy shops and electronics shops.

“The amount of consumer research they did to get to this level, the insight into consumer research, the insight into children, the whole detailing was something that impressed me,” says Sudhir Sethi, CMD of IDG Ventures, which along with YourNest did a pre-Series A funding round of $2 million in the startup this April. IDG is also planning to raise a series A round “of $10-15 million, which will take place by the end of this year”, Sethi adds.

“ Our initial reaction to the product was that it had potential... we were happy with the initial promise.”
Shankar Maruwada, co-founder and CEO, EkStep

Emotix’s first prototype was picked up by Infosys co-founder Nandan Nilekani’s EkStep Foundation in Bengaluru who saw Miko evolve from a white board concept to an actual product. “Our initial reaction to the product was that it had potential. There was a lot of work that still needed to get done, but we were happy with the initial promise,” says Shankar Maruwada, co-founder and CEO at EkStep. “We are now discussing with them on how to use the upcoming developments in Miko in a cost-effective manner, so that it can be used in low-resource school environments.”

The robot is not only being picked up by urban consumers but also by schools in tier 2 and tier 3 cities. One of their first bulk orders, in fact, was from a school principal in Bhagalpur, Bihar, recalls Vaswani. She wanted to give the children exposure to AI and technology.

Since October 2017, Vaswani says, sales are growing at 30 percent month-on-month and they are working on options for Miko to interact in Hindi and Hinglish. And besides a vision for Miko, which will go into “Miko 2, Miko 3, Miko 4, there’s a ten-year pipeline to Miko that we are working on”, the founders also have a long-term vision for the company. They are looking at other consumer problems that a combination of ‘emotional intelligence and robotics’ can solve.

Tweets by @forbesindia
AlphaZero: A watershed moment in AI?
Customers at the back of the line are anxious-can you keep them from leaving?