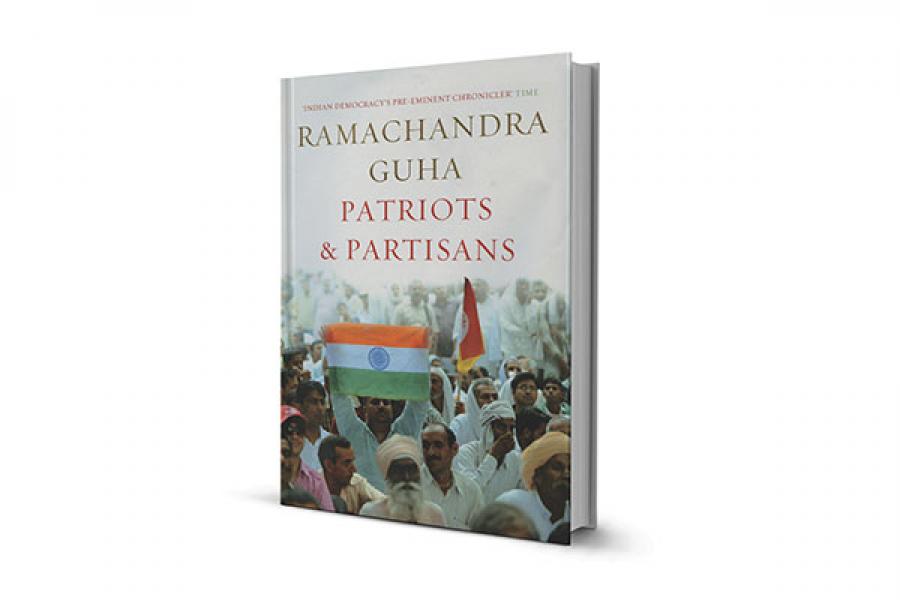 North, south; urban, rural; BIMARU, developed; Hindu, Muslim; left wing, right wing; upper caste, Dalit—these are just a handful of the ‘million mutinies’ brewing in India. Juxtapose this with the idea of unity, of one India and the difficulty of being a liberal person in India comes through. It is easier to simply pick a side, practise your arguments and get on with life.

Most public intellectuals today belong to a particular camp. They could either be the guardians of the middle-class outrage, warlords of ethnic discontent, or worshippers of all things Left. To be a liberal in a polarised Indian society of today is to forever live on the razor’s edge of rationality. It is hard work.

It is good then that Ramachandra Guha has decided to publish a collection of his previously published essays (and some new ones) in Patriots and Partisans.

Guha outlines three challenges to Indian democracy: Hindu fundamentalism, communist dictatorship, and ethnic separatism. None of these are new to our age. They were as true in 1947 as they are today.

According to Guha, the key problem with the idea of the Hindu Rashtra is that it cannot handle the complex layers and contradictions of the Indian society. It is sexy because it conveys a feeling of one-ness and glorious and pure tradition.

One of the most hilarious chapters is on the hate mail that Guha gets from the Hindutva brigade. One email reads: “…India is bound 2 be a worldpower. Take my words. People like Guha are agents of China and they also go to the temple (though in the middle of the night)!”[sic]. To not align one’s view with the Hindu right is to immediately be branded as closet lover of Al-Zawahiri or a mistress of the Left.

So, does the Left have the answers for India? Guha doesn’t think so. One of his key critiques of the “Communists in general and Leninists in particular is their desire to capture and control public institutions”. Guha talks about how the bureaucracy, the police and universities were all made to kneel before the communist party cadre.

So what, one can say. Doesn’t the Congress government do that? Haven’t others done it? This is exactly Guha’s point. The Communists have not shown any foresight or behaved differently when they have managed to get into a position of power. Even in a state like Kerala, Guha gives only 20 percent credit to the Communists for the state’s great social indicators. He points out other factors that are equally responsible.

For instance, the Nairs—one of the larger castes—are matrilineal, and the other large caste of Ezhavas were organised by Sree Narayana Guru to fight the Brahmin orthodoxy and use education to liberate themselves. Kerala had progressive maharajas who built schools and sent bright students of all castes and both genders to study abroad. And, of course, the Christian institutions with their focus on education and women empowerment have done their bit too.

The biggest takeaway from the book is that in a land as diverse as India the way to be an Indian is to be able to live with the multifarious identities. The chapter ‘The Beauty of Compromise’ alone is worth the price of the book. India, then, isn’t about one. It is about many. Please adjust.

Tweets by @forbesindia
Will Sailfish Take on Android in China?
Immortal Gifts of Love