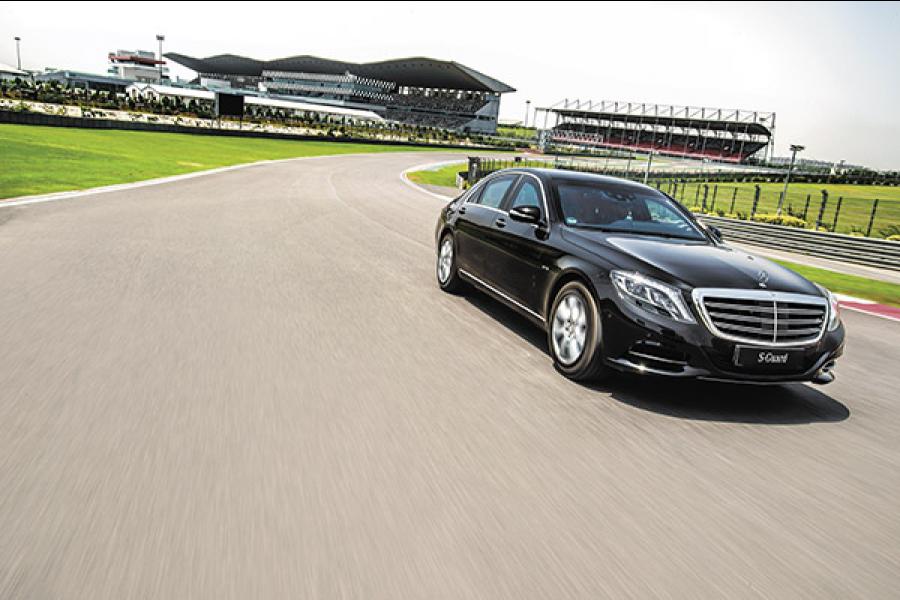 The S-Guard is a monumental feat of engineering and the fact that it looks and drives (to a fair extent) like a normal S-Class is simply outstanding, given what’s under the skin: Close to two additional tonnes of armour and reinforcement.

The passenger cell gets the most reinforcement: In the doors, glasshouse, roof, firewall, bulkhead and floor in particular. But the shocker comes when you swing one of the doors shut. The windows, well over an inch thick, have five layers and include an infusion of polycarbonate to prevent splintering. That, and the metal reinforcements, make each door more than 150 kg. Thank heavens for the soft close function! In fact, the window assembly is so heavy that it requires a hydraulic motor.

The S-Guard sits right atop the European BRV (bullet resistant vehicle) testing standards with a rating of VR9. The E-Guard is at VR4 and the ML-Guard at VR6. These indicate the calibre of bullet the car can repel. So, a VR4 is good for Dirty Harry’s choice of handgun, the mighty .44 Magnum; a VR6 can handle an AK-47. However, at VR9, you’re not just talking about military-spec automatic rifles but also dual-grenade attacks, while the underbody protection deflects shocks from improvised explosive devises. The car is literally bomb-proof. Testing includes shooting at the car with a variety of weapons at different ranges (if even one penetrates the cabin, the test fails), and subjecting the car to an explosion that engulfs it in flames.

But safety goes beyond the reinforcements. In the front console is an array of James Bondesque buttons with functions like releasing a shot of stored clean air into the cabin in case of a chemical attack or closing off all access points for external air. A fire extinguisher works automatically (or manually) to detect and douse any fire near the vehicle. Special Michelin PAX tyres can run at high speeds for about 30 km, even when fully deflated.

The six-litre twin turbo V12 engine makes sure the car makes a quick getaway. The S-Guard surges forward on a massive wave of torque fed to the rear wheels through a seven-speed torque converter. Top speed has been limited to 210 kmph, keeping the weight in mind.

The interiors are as plush as a standard S-Class, as are the initial impressions (aside from shutting the door!). At low speeds, the weight is definitely perceptible but very well controlled. However, as the speed rises, the weight rapidly becomes apparent. The S-Guard offers quite a bit of grip, but once the limit is crossed, you suddenly have about 4.3 tonnes trying to pull you off the line and there’s not much the tyres can do. Getting things back under control is more difficult than in a lighter car.

The Rs 8.9-crore starting price (customisation options are endless) is shocking. But the S 600 Guard is an incredible machine for only the most important people on the planet.

Tweets by @forbesindia
Vserv: The early bird in the mobile ad industry
Fortis tames debt burden, but at a cost