Mayumi Kotani: A woman in Japan's patriarchal world of manufacturing 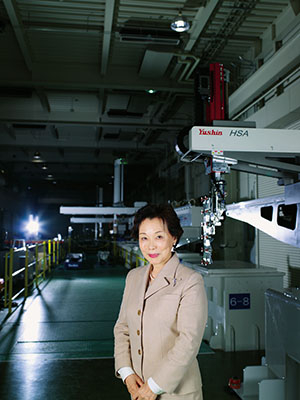 Potential buyers of factory robots in Japan might have been taken aback when Mayumi Kotani, president of Yushin Precision Equipment, walked in to give them a sales pitch.

Japanese corporate suites are dominated by men—with women even rarer in the conservative manufacturing industry. Quick wit and competency, however, trumped the gender card. “When we first met, I think they were probably thinking, ‘Oh, it’s a woman’,” she says. “But in discussions and when there were questions, I would promptly give them figures and answers and was able to build up trust quickly.”

That trust turned into orders, and continues decades later. Starting out in the early 1970s with her husband, Susumu Kotani, who founded the company, and another employee, Kotani served as sales vice president for 12 years before taking the helm in 2002 after her spouse died.

Under her guidance, Kyoto’s Yushin has seen rapid overseas expansion and strong margins. All the while the company has maintained robust top-line growth and has the No 1 market share by value in Japan, Asia (excluding Japan) and the US for its robots, which mostly extract injection-moulded parts.

In talking about the early years, Kotani, 68, flips the pages of a small blue notebook that she carries with her everywhere and often checks when she is on a train or plane. Filled with small handwritten print, it contains everything from finances, salaries and compensation for problem machines to the names of employees’s children and how long staffers have been stationed overseas.

Her attention to detail has paid off. For the year ending March 31, the company forecasts $167 million in sales from its mainstay take-out robots and other equipment, which would translate into nearly 10 percent average annual growth over the past five years. It counts on margins almost two-thirds higher than its closest domestic competitor. Around 70 percent of revenue is expected to come from foreign sales, and the bulk of that from Asia, up from just half in fiscal 2005.

The company plans to increase revenue by half again over the next three to four years and raise profit by 40 percent before that. Sales from new robots for health care-related production by companies in the US and Europe will be one driver, increasing from the current 5 percent of revenue, Kotani adds.

Yushin’s biggest sellers, accounting for about three-quarters of revenue, are take-out robots using air-driven suction cups or mechanical pinchers to pull parts out of their moulds quickly and efficiently and stack them for shipment or further processing. The parts handled are as large as an automobile bumper or as small as a contact lens.

Overall robot demand is strong. The 2014 World Robot Statistics report forecasts global installations will expand by 12 percent on an average annual basis from 2015 through 2017. China, for example, is coming from a low installed base and dealing with rising wages. As of 2013, there were only 30 robots per 10,000 manufacturing workers in China, compared with 437 in South Korea and 323 in Japan, the report says.

Kotani says that Yushin has been able to maintain high margins because of its production strategy, higher sales prices than competitors’s and annual reductions of about two percent in procurement costs. In contrast to most Japanese manufacturers, the company outsources almost all its production. It handles development, design and procurement, with final adjustments done in-house.

Japan has been trying to raise female workforce participation to offset its shrinking and greying population, which is triggering labour shortages. One of Prime Minister Shinzo Abe’s signature reform planks is to increase the proportion of women executives to 30 percent by 2020 from 6.6 percent now.

While Kotani says such a target “is better than nothing”, the keys to increasing female participation, she argues, are how children are raised and taught—and to a lesser extent, other policies, such as fixing an income tax structure for married couples that discourages women from having careers.

“In principle, I think it’s education. Education and government policies,” she says. “I was always told by my grandparents and parents to do something of use to other people, to take leadership, to do something on my own initiative.”

Kotani says that from childhood she has had an attraction to making things. From about the age of 10 to her mid-40s, she says, she made her own clothes, including her wedding dress, by watching a tailor in her hometown in Kochi Prefecture in Western Japan.

In Kochi, Kotani says, the women are especially active. Indeed, the proportion of female heads of companies in Kochi is the second highest in Japan, according to a 2012 survey by research firm Teikoku Databank. “Kyoto is very different and quite conservative—where women tend to stay in the background,” she says.

Not surprisingly, Kotani appears to have had an impact on her two daughters, both of whom work at Yushin. They not only have engineering degrees from top Japanese universities, including a Ph.D, but also MBAs from US and UK institutions, including MIT. Her younger daughter led the development of Yushin’s fastest take-out robot, and her older daughter is in the management and planning office. Together the three women hold 21 percent of the Tokyo Stock Exchange-listed shares, and a family-controlled company has a further 25 percent.

She wouldn’t say whether management would stay in the family, but a second generation doesn’t seem out of question. “Whether I choose or not, someone who can handle these times will be needed,” she says. “I don’t think they would be inferior to someone from the outside.”

Away from the clanking of metal, the din of machines and her little blue notebook, Kotani practises traditional Japanese dance, which she has been doing since the age of two. She also plays the koto and shamisen stringed instruments and gives dance performances about four times a year. A Kyoto newspaper says her musical ability would “put a professional to shame”.

“The arts are a different world from employees, production, shareholders and making profits. Maybe it’s just an illusion, but doing that gives me a sense of balance and contentment. I might be under more stress at the company if I didn’t,” says Kotani. “Still, it’s much more pressure than an earnings announcement.”