A second coming for Ferrari and Maserati 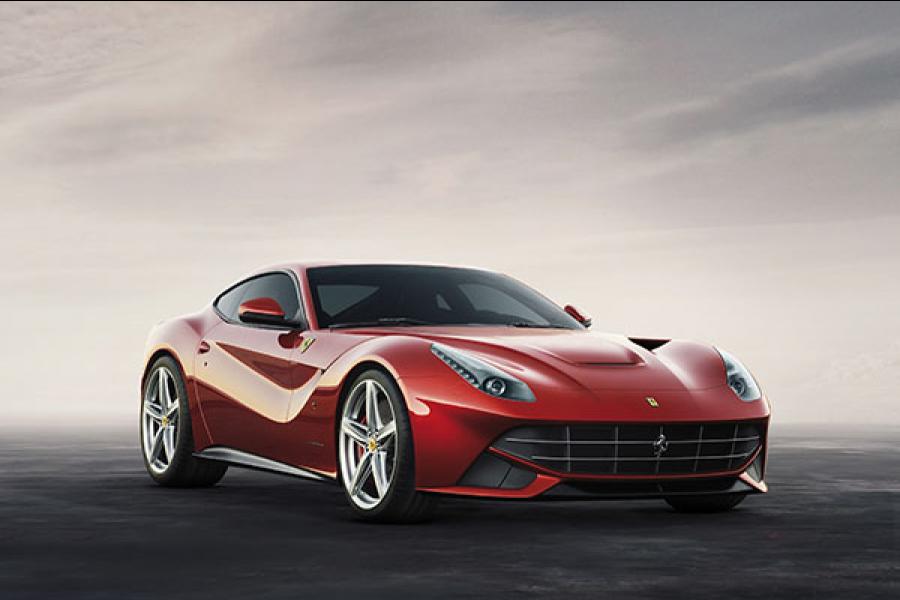 In august 2002, Italian automaker Fiat gifted Sachin Tendulkar a Ferrari 360 Modena for equalling Australian cricketing legend Don Bradman’s Test record of 29 centuries. From the time Ferrari’s parent company Fiat made the announcement, every minute detail was carefully recorded—the colour and make of the car, waiver of import tax and its subsequent sale to a Surat-based businessman nine years later.

What piqued the Indian public’s curiosity? Obsession with cricket and the demi-god status of Tendulkar apart, there was also the iconic status that Ferrari enjoyed as a brand. The Italian supercars, that carry the logo of a prancing stallion, symbolise raw power, adrenaline-inducing speed, high performance and luxury.

Despite the fact that Indian roads aren’t appropriate for low-slung supercars like those made by Ferrari and Maserati—Ferrari’s one-time arch-rival that is now also owned by Fiat—they remain the ultimate objects of desire for the country’s rich and famous motoring enthusiasts. Over the years, businessmen, movie stars and sports personalities have braved India’s exorbitant import duties and paid top dollars to import these cars, characterised by the distinct roar of their V8 and V12 engines.

It is no surprise then that despite a bitter first experience in India with their distributor, one that forced Ferrari and Maserati to stay away from the country for a while, the two iconic carmakers find India to be a market they cannot ignore for long. Both luxury car brands are gearing up for their second innings in India and are leaving no stone unturned to ensure it is a success.

Ferrari and Maserati entered India in 2011 with a common importer and dealer—Shreyans Group. However, owing to mounting complaints of alleged negligence in after-sales service and, in some cases, failure to deliver cars even after accepting payment, Ferrari and Maserati severed ties with Shreyans in 2014 and had no presence in the country since then.

“Obviously it [the issue with the dealer] came as bad news. But at no point did we think that abandoning India was a solution,” says Aurelien Sauvard, head of sales for Middle East and Africa at Ferrari, who is also in charge of the Indian market.

Echoing his thought is Maserati’s head of India operations, Bojan Jankulovski. “We took the issue as a learning experience because India is a very important market. We had to re-enter India to fulfil our commitment to our customers,” says Jankulovski.

Ferrari has now re-entered India with two dealers: Navnit Motors in Mumbai and Select Cars in Delhi. Maserati, too, has robust expansion plans. Its first showroom in India is operational in Delhi and is managed by AMP Supercars. By November end, two other showrooms will come up in Mumbai (with Bagga Luxury Motorcars LLP as dealers) and Bengaluru (with Jubilant Autoworks Pvt Ltd as dealers).

Sauvard says one of Ferrari’s top priorities over the last year has been to get in touch with customers who had paid money but did not get delivery of their cars. The carmaker even flew in technicians from Italy and Dubai to service cars already on Indian roads. “We took up the problems faced by each customer with our headquarters in Italy and all cases were resolved,” says Sauvard.

While the experience was a setback for Ferrari and Maserati, analysts say the two brands are too strong to be hampered by the problems of the earlier distributor. “If they enter the market with the right people and take a front view of the whole thing, they will achieve their targets. They have to be in the driver’s seat,” says Nabankur ‘Nobby’ Gupta, founder and CEO of Nobby Brand Architects. 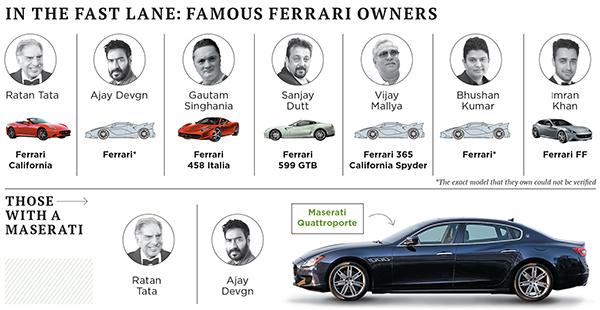 REVISED INDIA PLAY
For their second coming in India, the Italian automakers are taking measured steps. “We wanted to go slow and needed some time to make sure that we re-enter with the right partners, right products and in the right metro cities,” Jankulovski says, explaining the big time lag between severing ties with the earlier distributor and forging a new alliance with a local player.

Like in any other luxury segment, personalisation and direct communication with the customer is key in automobiles as well. Both carmakers stress on the need to appoint trained personnel for sales and service. Sauvard says that all dealers who are a part of the Ferrari network must send their sales and after-sales teams for a certain number of training sessions conducted by Ferrari. This will ensure that the technicians are equipped to convey Ferrari’s brand message and offerings appropriately to customers.

For Ferrari, whose showrooms in Delhi and Mumbai will be operational by November, the focus will be on appropriately marketing the brand. “We will ensure that we bring all the luggage filled with Ferrari’s secret ingredients—including lifestyle events and drive events—to ensure that the whole thing catches up and grows like any other market,” says Sauvard.Wiser through hindsight, Jankulovski says Maserati will exercise closer control on its dealerships and ensure that the brand is represented as per its global standards, which is compliance in terms of sales, after sales, service excellence, network infrastructure and a grand representation.

“The allure has always been the speed on one hand and on the other, an appreciation and respect for the best of breed,” says Bhavin Turakhia, founder and CEO of Directi Group, who owns a Ferrari 458 Spider in San Francisco.

One of the elements that add to the charm of these luxury brands is the Italian heritage that they are steeped in. The first car that carried the Maserati name, with the logo of the trident from the statue of Neptune in Bologna’s Piazza Maggiore, has a history that dates back to 1926. An exclusive customer lounge in Maserati’s new showroom in Delhi takes customers through the history of the carmaker.

NOT JUST SPORTS CARS
For Jankulovski, a Maserati customer is a connoisseur who appreciates exclusiveness, craftsmanship, individuality and heritage. This spans across age groups, genders, cultures and nationalities in each market. And the luxury carmaker is ensuring that its customers have enough and more to choose from.

Maserati has brought its entire product range to India, which includes the flagship Quattroporte—its latest E-segment sedan—and the Ghibli, as well as more niche models like the Gran Turismo and GranCabrio, which fall in the sports coupe and cabriolet category.

“We have a recipe for everything. So for instance, the Quattroporte is an elegant and large sedan that could well be used for chauffeuring or self driving. Ghibli is a smaller, pure drivers’ car and eventually the Gran Turismo and GranCabrio are pure sports cars that reflect the racing spirit of Maserati,” elaborates Jankulovski.

The waiting period for these cars is between three and four months, depending on the customisation a customer wants. There is also a configurator area in Maserati’s showroom where one can customise the details of cars.

For its part, Ferrari has announced its latest India launch with the California T. “The California is the most successful model so far in Ferrari’s history, with over 10,000 units sold since its 2008 launch. And we expect this one [California T] to be better. In the US, in 2009 and 2010, almost one out of every two Ferrari cars sold was a California,” says Sauvard.

“Our customers do travel and might have seen it [the California T]. But there are also people who are interested in these cars without seeing them and some have even made the entire payment before the car has arrived,” says Sauvard, adding that they have started receiving orders for 2016. 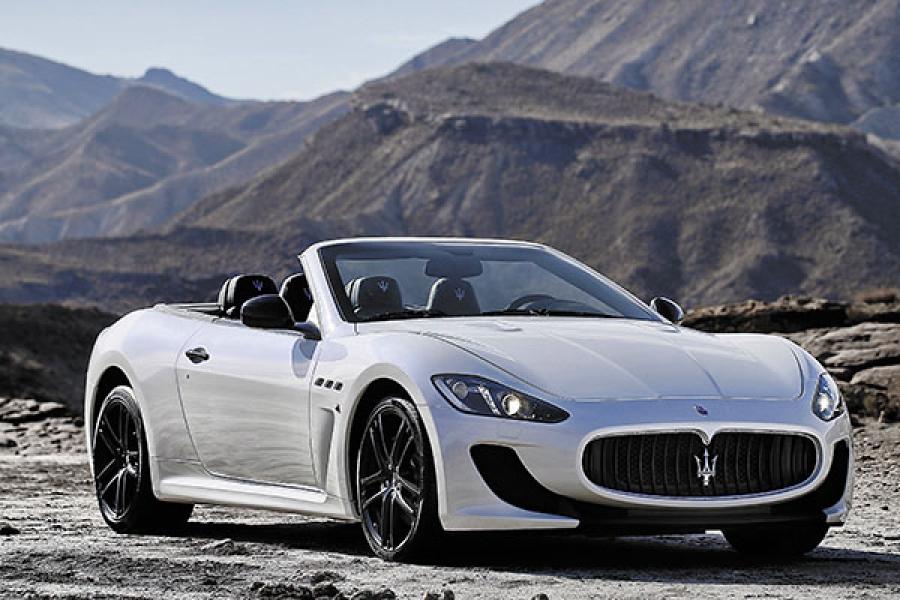 Ambitious Targets and a Few Roadblocks
Maserati, which sold 36,500 units globally last year, has set itself an ambitious target of selling 75,000 units by 2018. However, its focus remains on exclusivity, says Jankulovski, adding that they are targeting double-digit sales in India. He, however, doesn’t specify the exact number of cars that Maserati hopes to sell in the country.

Ferrari plans to sell 20 cars by the end of 2015 itself. “And this is just a partial year for us in India,” says Sauvard.

Gupta feels that these targets are achievable due to the large number of high net worth individuals in India. “These brands stand for a lifestyle statement. CEOs, industrialists and diamond traders are potential customers with high amounts of disposable income,” he says.

A 2015 report by Research and Markets throws light on why India may be a lucrative market for the two Italian automakers. “While the Indian auto sector is experiencing a down run, the luxury car market is witnessing growth. The sector is expected to grow at a rate of 15 percent per annum between 2015 and 2018,” the report states.

But not everyone agrees. “The tide was turning favourable for luxury cars when the F1 circuit came to India [the country hosted three F1 races in 2011, 2012 and 2013, but none after that owing to a tax dispute]. However, that momentum has now dropped. Therefore, the ambitious sales targets of Maserati and Ferrari can be considered a stretch,” says Mahantesh Sabarad, deputy vice president of research at SBI Capital Markets.

Experts believe that it is important for a super luxury carmaker in India to demonstrate that it is going to stay forever. “Having one or two dealerships is not going to help their cause; rather, having a country office with a test track and exhibition centre would help. More than the dealerships, customers need to directly connect with the company officials,” says Sabarad.

Yet another concern could be the non-availability of service centres away from the metro cities. So while smaller Indian cities like Ludhiana, Pune, Ahmedabad and Surat have many potential customers, lack of proximity to service centres may deter them from buying these cars.

But dealers do not consider this a major hurdle. Sharad Kachalia, principal dealer at Navnit Motors, admits that there are some pockets where Ferrari cars are available without a service facility nearby. “For such customers, we have ‘flying doctors’ and technicians who make site visits to help the owners. If there is a major problem, we bring the car to the closest centre, which may be in Delhi or Mumbai,” says Kachalia.

These minor glitches, however, seem to have had no effect on the brand value of these cars. And this explains why both Ferrari and Maserati have thin advertising budgets. “They are not volume players. They don’t have to promote their cars, but market them appropriately,” says Gupta.

One thing is certain. With a local marketing presence in place again, a larger number of red Ferraris or silver Maseratis, belting out 500 brake horsepower from their roaring V8 and V12 engines, are bound to turn more heads on Indian streets.

(This story appears in the 13 November, 2015 issue of Forbes India. To visit our Archives, click here.)