Can the Indian Super League do an IPL?

Though still in its infancy, the new soccer league has big dreams for Indian football 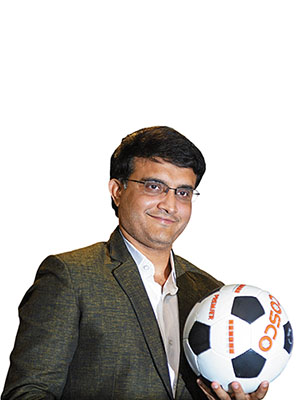 Image: Getty Images
Sourav Ganguly, former cricket captain and a soccer buff himself, is a co-owner of the Kolkata franchise

As the sun sets beyond the cricket nets at Shivaji Park, droopy, young, white-flannelled shoulders begin the tired walk back to their tents. They have wrapped up for the day. But the enthusiasm in Mumbai’s sporting haven has not dimmed and the rhythmic chants of ‘goal! goal!’ from bystanders carries across the ground. A few yards away, a group of teenagers in identical Messi jerseys are huddled around a makeshift goalpost facing the newly refurbished Gymkhana, furiously debating strategy to the beat of ‘Messi! Messi!’

The symbolism of the moment is not lost. In the dusty bastion of Indian cricket in Mumbai, football is the new disruptor; Lionel Messi its haloed hero.

While India has had a long history of domestic club football, the passion for the game had been confined to a few states: West Bengal, Goa and Kerala. That has changed ostensibly in the last few years. In 2012, football viewership peaked in India with the Uefa Champions League. That year, football had 155 million viewers, second only to cricket’s 176 million, according to a study by Tam Sports. That is nearly double the 83 million viewers it had in 2010.

The English Premier League’s staggering popularity has been acknowledged by the All India Football Federation (AIFF) which went on record saying, “More people in India watch the EPL than in England.” There is some semblance of a “club culture” in pockets of urban India, with sharp growth in football merchandising and retail, especially for EPL clubs such as Manchester United, Arsenal and Liverpool. Other European leagues, like Spain’s La Liga, have an impressive following as well.

But when it comes to domestic events like the I-League, the country’s premier football tournament, interest starts dwindling. Less than 40 percent of Indians watch domestic championships. Fewer advertisers buy into these matches.

“Indian football has no following because it has no heroes,” says Santosh Desai, MD of FutureBrands, a brand management consultancy. “I-League clubs are in complete disarray. Infrastructure is poor. There is just no money in non-cricket sports in India.” And it is this that the Indian Super League (ISL)—an IPL-styled football league—has set out to amend.

The ISL, organised by IMG Worldwide and Reliance Industries with the backing of the AIFF, kicks off this September and promises to bring some professionalism to football in India. As the national team languishes at No 145 in Fifa rankings, this league seeks to pave the way for “the nation’s sporting renaissance”, a joint statement from IMG-Reliance stated.

While that may be rhetoric, ISL has a few things going for it: One, it heralds the era of much-needed corporate investment in Indian football. Reliance Industries (RIL), owned by the richest Indian Mukesh Ambani, has lent its name to the league. Corporate entities such as Videocon, RP-SG Group, Ambuja Group, Sun Network and PVP Ventures, which owns an IPL team, have bought franchises.

Two, the league is being endorsed by some of India’s biggest stars from the world of sports and entertainment. Sachin Tendulkar, Sourav Ganguly, Salman Khan, Ranbir Kapoor and John Abraham co-own franchises. They will ensure that the league gets off the ground high on hype. They bring in the fans as well as sponsors, who are crucial for the sustenance of a high-cost league. 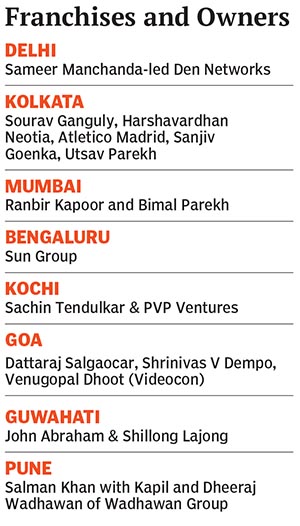 "Stars associating themselves with non-cricket sports is a great thing because in Indian advertising only cricket and Bollywood sell,” says Anil Sathiraju, AVP & head (south) at DDB Mudra Max, a media buying agency. Brands associated with these stars often become a part of the initiatives supported by them. For instance, Nokia became the title sponsors for an IPL franchise owned by its longstanding brand ambassador Shah Rukh Khan; Aircel did the same for another franchise captained by its brand ambassador MS Dhoni.

“ISL is nowhere close to IPL. But there are two sets of advertisers who will be sampling during the league—one that can’t afford to break into IPL and one that wants to maximise its reach through ISL at one-fourth or one-fifth the price,” says Sathiraju.

It is a win-win situation for the league as well as the brands. The AIFF has pledged that the money coming into ISL will be utilised to develop the game at the grassroots. Its Strategic Grassroots Plan, which began in late 2012, works with local clubs and players at the under-17 level. With corporate investment in the sport, the federation hopes for better player fees, quality coaches and doctors, improved practice facilities, stadiums etc. “We have the perfect recipe for a successful professional tournament,” says Kushal Das, general secretary, AIFF.

But marketers sound a word of caution. Desai says, “The IPL is not necessarily the right model for every other sport. It harnessed a crazy cricket culture already in place. It wasn’t an act of developing a sport. But ISL has to create something out of nothing.”

Desai’s sentiments are echoed by Sourav Ganguly, co-owner of the Kolkata franchise. In a recent interview to AFP he said, “Don’t compare it with IPL or cricket. It’s the start of something good. Hopefully, somewhere down the line, things will improve [for football].”

In ISL’s IPL-like setting, local talent gets to rub shoulders with international players. While most of them (Robert Pires, Fredrik Ljungberg, Hernan Crespo, Robbie Fowler, Thierry Henry) are past their prime, they are leagues above Indian footballers.

“ISL may not create stars but the exposure to international icons will help India’s rookie footballers in their skills and ethics,” says a sports writer tracking soccer leagues. “And ISL presents a possibility that even Messi could come and play here in India for a few years before his retirement. That is fantastic.”

(This story appears in the 16 May, 2014 issue of Forbes India. To visit our Archives, click here.)