By buying a 24% stake in the Indian carrier, Etihad Airways has sprung hope for a revival in Jet’s fortunes. But is Naresh Goyal’s airline too far gone for repair? The industry will be watching 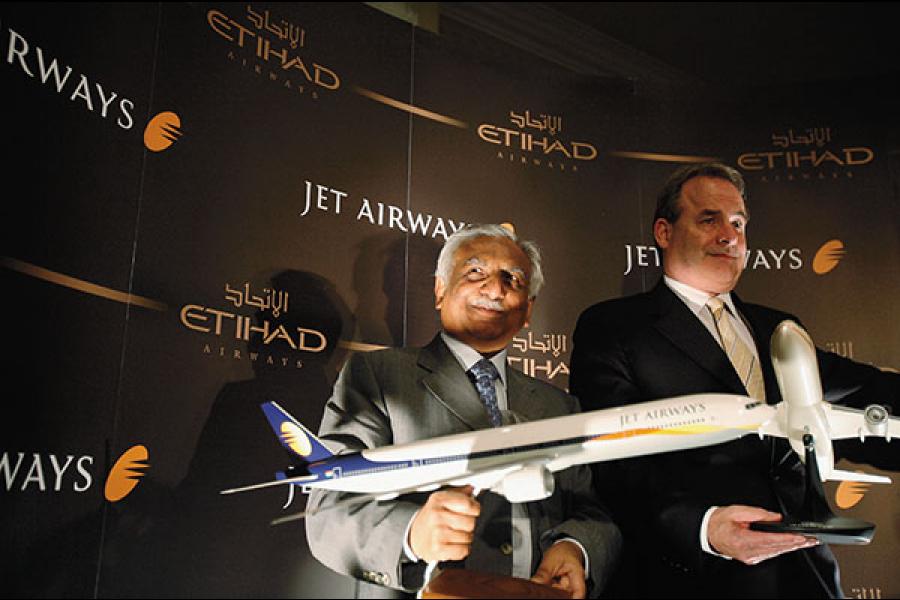 There is little doubt in anyone’s mind at Jet Airways about who calls the shots these days. The offices near Mumbai’s international airport have vice-presidents, captains and department heads, cabin baggage in tow, buzzing in and out. Most are either coming from or are en route to the Etihad Airways headquarters at Khalifa City in Abu Dhabi.

At the next board meeting, Jet Chairman Naresh Goyal will formally induct two new members into his board. Etihad President and CEO James Hogan and CFO James Rigney take their place along with a 24 percent stake in the airline. Goyal’s long-time friend and advisor Vic Dungca, who has been with him from the day he started the airline 20 years ago, steps down from the board.

What is not as well-known is that apart from the board seats, alignment with Etihad has begun at various other levels. Most of this is led by the new Jet CEO, Gary Toomey. Jet insiders say senior managers responsible for rolling out the integration plan have already been selected. Some are expat Indians who work for Etihad; others are on secondment from the airline. Earlier, around 40 captains quit Air India to join Etihad; 11 of them are now on secondment to Jet Airways and will be based in India to operate flights from Abu Dhabi. For many in the airline, the distinction between the two carriers is already getting blurred.

You can’t miss the irony. In the Middle-Eastern aviation market, Etihad Airways was, till recently, considered to be an also-ran with pots of gold to bank on. In India, Jet Airways is now a fading star, losing steam and starkly in the red. Their alliance is being positioned as a marriage of convenience, with both companies using the other to gain stature and viability, respectively. There it is. The irony.

Hogan views Jet as the jewel in his crown—his best chance at grabbing a slice of the Indian market. It is also possibly the only way to beat big brother Emirates, which is miles ahead on the high-potential India traffic. In a bullish interview to Airline Business magazine this month, Hogan had said that Etihad’s seat allocation to India ramps up from 12,000 seats a week to 50,000. “We fly to nine cities today. When we max out, between us [Jet and Etihad] we will be flying from Abu Dhabi to 26 cities in India. We will grow our presence in Bombay and New Delhi, so now long-haul flying [from India] to the USA will be over Abu Dhabi,” Hogan had said.

Hogan’s optimism glosses over many ground realities at Jet. The airline has never been as lost as it is now—and in no small part due to the promoter’s errors of judgment.

International analysts have strongly questioned Etihad’s wisdom at buying a stake in the loss-making airline. With a fleet of 80 planes, carrying 10.3 million passengers annually, Etihad is currently smaller than Jet Airways, which has more aircraft and a larger network but is swimming in a sea of red.

The rise and fall of Jet Airways is the stuff of legends in corporate India. Goyal started the airline 20 years ago with a couple of leased planes; he now runs a global operation with over 100 aircraft. Jet ramped up quickly, and almost too easily, to become India’s largest and most used airline. But Goyal was never able to fulfil his ambition of creating a premium network carrier like his ideal, Singapore Airlines. He and his wife Anita closely controlled the operations, running the company first from their offices near Mumbai’s international airport and later from their upscale house in London. The string of expat CEOs hired by Goyal had little authority over most important decisions. “Jet was never really a professionally-run company,” says Saroj Datta, who served as the airline’s executive director till he retired two years ago.

The reversal in fortune can also be traced back to the entry of low-cost carriers (LCCs) in 2005. Goyal, who had built his worldview in the era or network carriers, was unable to make the course corrections needed in the new scenario. Datta says, “Keeping 80 percent of the shareholding for himself was such a waste. Sadly, no one could make money from the airline.’’

Hogan and Etihad have grand visions of a rosier future for Jet but turning the airline around is going to be a monumental task for several reasons. Foremost is the financial mess the airline is in. In the last three quarters, Jet has lost more than it has earned in almost 10 years. On a standalone basis (without subsidiary JetLite), the airline reported net losses of Rs 495 crore in the January-March, Rs 355 crore in the April-June and Rs 891 crore in the July-September quarters this year. The losses in 2013 so far add up to a staggering Rs 1,741 crore. Goyal has been unable to stem the rot. Many thought when Kingfisher Airlines went belly-up, it would give Jet the headroom it needed since both airlines competed fiercely on metro and feeder routes. But even a year after Kingfisher’s exit, Jet’s operating costs remain much higher than its income. 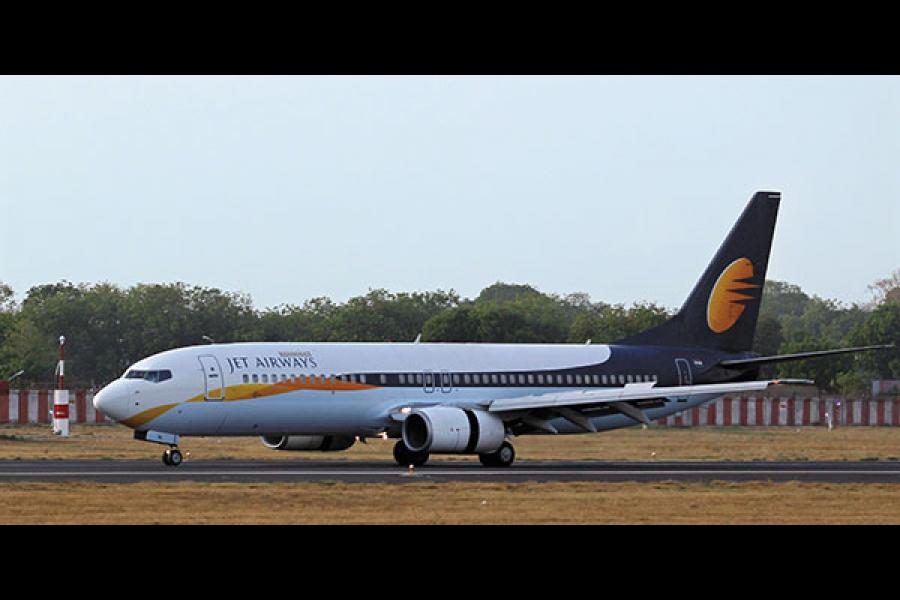 Image: Amit Dave/ Reuters
JetKonnect has been unable to match the low operating costs of his more nimble rivals
In the past, higher revenues and margins on international routes were the saving grace for Jet when under pressure from domestic competition. But that has changed. In the first half of 2013-14, the airline lost nearly Rs 336 crore on its international operations. Revenues per passenger have fallen, while costs have risen. While speaking to analysts after the record losses in the last quarter, Jet CFO Ravishankar B had said that high fuel prices and a weak rupee were responsible for most of the losses. International oil analysts say this scenario is unlikely to change in 2014.

However, Ravishankar and the Jet management are bullish about Etihad’s investment as the deal will allow certain cost benefits. It will help Jet restructure its $1.6 billion debt. Ravishankar had said that “Jet will raise $300 million in ECBs [external borrowings] soon, half of which will be through Etihad’s banking relationships”. This will allow the airline to save $30 million in interest cost. Its cost of borrowing is currently 5.1 percent.

Jet insiders in the senior management say the second big negative for Jet Airways is JetLite, or the erstwhile Sahara Airlines. “It is a millstone that the airline has been unable to get off its neck,” says a vice-president at the airline, on the condition of anonymity. Goyal’s decision to buy the airline in 2007 was motivated by his desire to checkmate his arch rival, Vijay Mallya. It proved to be his worst entrepreneurial call. Last year, Goyal extinguished the JetLite brand and replaced it with the in-house low fare brand JetKonnect. However, the repositioning has done little to help matters. JetLite (India) Ltd is still the operating subsidiary of the airline, reporting higher losses every quarter.

Fact: Goyal was never able to leverage the Sahara fleet and network to Jet’s advantage. But he cops out by claiming he had been sold a lemon because the Sahara aircraft were poorly maintained and had terrible lease terms; so bad that many years after the acquisition, Goyal was unable to terminate the lease agreements for planes that he no longer wanted.

Even today, Jet operates with two separate air operating permits—his own and the one he acquired from Sahara.

The acquisition only confused Goyal further about Jet’s future as a premium carrier—he started contemplating conversion to an LCC. For the past eight years, while challenger LCCs IndiGo and SpiceJet have nibbled away at his lunch, Goyal has meandered all over the airspace with three brands, Jet Airways, JetKonnect and JetLite, and no clear path to focus on. His LCC operation JetKonnect has been unable to match the low operating costs of his more nimble rivals.

This state of affairs should concern Hogan who is in the middle of a similar experience with another partner, Air Berlin.

Despite being involved with the European carrier for 18 months, Etihad is still uncertain about how long it will take to bring the airline back to solid profitability. The German carrier reported a net loss of €420 million ($570 million) in 2011, but thanks to “non-recurring events” (the sale of its loyalty programme to Etihad), it scraped a small net profit of €7 million ($10 million) in 2012. But it still has some way to go before it can stand on its own.

Hogan, who is obviously operating with piles of cash from the Abu Dhabi government, has struck a similar deal with Goyal. In early November, he announced that Etihad was buying a majority stake in Jet’s frequent flier programme ‘Jet Privilege’ for $150 million. Whether the cash infusions enable a turnaround is yet to be seen.

Kapil Kaul, South Asia CEO of Centre for Asia Pacific Aviation, has observed Goyal through the smooth phase and the turbulent times. He believes Jet’s ability to sync its operations with Etihad is critical and also warns that this could be a tedious process. Beginning April 1, Jet will start operating to the US, via Abu Dhabi, though details of the joint strategy are yet to be made public. It may also eventually give up its European hub at Brussels in Belgium.

Kaul says the immediate benefits will be the reduction in fuel costs and the ability to pick up extra passengers at higher fares. The other synergies from sharing equipment and expertise will take time.

Despite the doubts and magnitude of the job ahead, the conclusion of the deal has brought hope all around, especially at the Bombay Stock Exchange. The Jet stock jumped up to Rs 325 in a falling market on November 21, a huge recovery from the low of Rs 280 at the end of August. Of course, let’s not spoil the party by reminding the punters that they had once bought the same stock at Rs 1,100.

Tweets by @forbesindia
The Godrej Foundation: In Charity They Trust
The Bajaj Family Has a Tradition of Giving