During the current lockdown, when the corporate world is entering rather unknown territories, the role of the Chief Human Resources Officer (CHRO) has gained importance

During the current lockdown, when the corporate world is entering rather unknown territories, the role of the Chief Human Resources Officer (CHRO) has gained importance. It is this CXO that must lead the way on various fronts – from ensuring a smooth transition to working beyond physical offices to keeping employees who are working in isolation motivated. As in regular times, organisations also look to these ‘people’s people’ to bring out the best in human resources and deliver the agenda of the company, even in unprecedented times.  Seeking to uncover the strategy, approach and planning that goes behind cohesively bringing out the best in teams, remotely, during this pandemic, Forbes India and Indeed hosted a virtual conference of CHROs from sectors that are fighting the battle against Covid on the frontlines. The event brought together HR chieftains -  Sashi Kumar, managing director, Indeed;  Awasthy Palakkal, human resources head, Dunzo; Sini George, human resources head, WhiteHat Jr; Sanjay Sinha, chief human resource officer, Fortis Healthcare; Krishna Raghavan, chief people officer, Flipkart; Ankush Arora, vice president and head human resources, Grofers and SV Kiran, chief human resource officer, Apollo Hospitals. Moderated by Manu Balachandran of Forbes India, they shared some revolutionary insights after first describing their new normal work ways.  Aswathy Palakkal began by recounting how her company has ensured a stronger mechanism of daily and weekly reporting, online, despite the challenges. This has given her an understanding of how her team's health is and how they manage their day. “However, coffee breaks and water cooler chats are getting replaced with getting your dishes or laundry or cooking done,” she said, describing the new work-life balance. She has also introduced a social hour every Friday to bring employees together, virtually; these get-togethers have fostered stronger team building. In terms of supporting employees, she said, “We have started an employee assistance program which endorsed our belief that people need a lot more assistance in terms of handling their emotional wellness quotient at times like this.”  In agreement, Sashi Kumar shared that in addition to ensuring that his teams are physically safe, he checks that they are doing well mentally too. From three meetings a week, he has been calling for 15 a week now. Pointing out a rather ironic development, Sashi Kumar observed, “I know my team members better than I used to. We have children walking into conference calls; we are able to see where our colleagues live. In a sense, with the distance, a sort of closeness has emerged and we’ve got to know each other a lot better.” 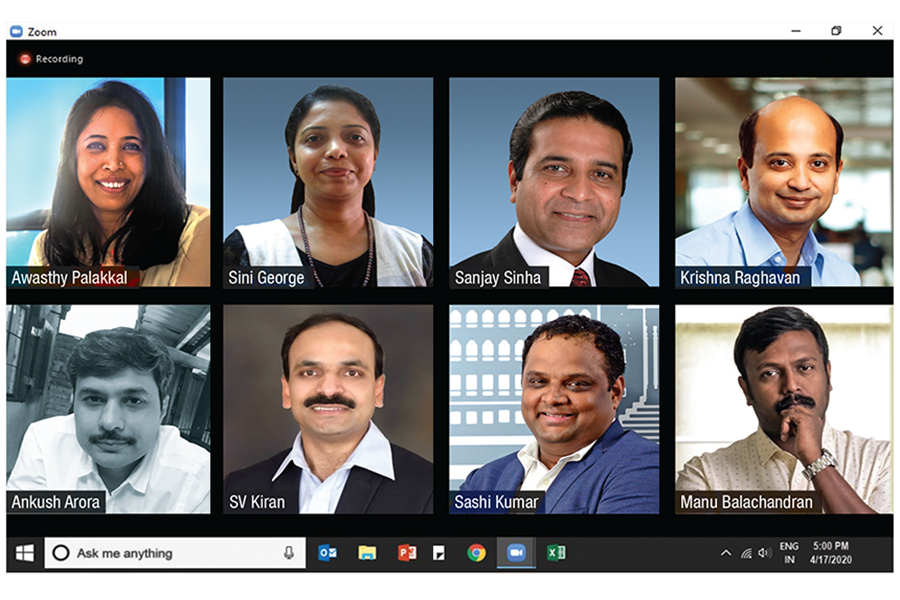 Being from the delivery business, Krishna Raghavan elaborated on the safety SOPs that had to be quickly initiated to protect the physical and mental wellbeing of his supply-chain workforce. With respect to non-delivery employees, he said, “Flipkart has had very flexible work-from-home policies for the longest time; the extended period of it is new to us.” He also emphasized the need for over-communicating during this time. “There must be a very strong cascade of communication about where the company is and where it is headed, what are the challenges and how we can emerge stronger from this crisis.”  Also from the delivery business catering to online customers, Ankush Arora expressed his amazement at the attitude of his young workforce, which has risen to the occasion. “We are not in a conventional war, but a warlike situation, and they are putting their best foot forward to safeguard fellow citizens.” He also talked about an initiative wherein his company partnered with industries that are forced to shut down temporarily and, therefore, have surplus staff or downscaled. Grofers offered employment opportunities to such people. “They are happy that they do not have to stay without work and, more importantly, they believe they are committed to a larger cause,” he said. “With no pre-determined SOP for this situation, we are doing the best we can by ensuring that we invest in PPEs, sanitizers, masks, ensuring that their handheld devices are sanitized regularly.”  Another great believer in over-communication Sini George shares how her organization celebrates every success on common communications channels. “This has helped us to bond within the team and maximize productivity.” She shared that her organsiation is distance hiring and onboarding and training new employees, even during the lockdown. The demand for additional staff has been triggered by the demand for her company’s products. With schools closed, engagement for kids has declined substantially, making WhiteHat’s products relevant. “We are engaging kids within the safety of their homes. That's why we had to start adding resources to cater to the demand and cover the market better.”  In contrast to the other HR honchos on the panel, SV Kiran revealed that being the CHRO of a hospital, where human interaction is essential, he did not have the luxury of mandating work-from-home. He and his management have taken up the fight against COVID on a war-like footing and they realized that unless they lead from the front, it is difficult to expect employees to be fully committed too. Beyond instilling a sense of work-pride among employees by explaining how they were actually warriors in the current battle against the virus, he has been busy ensuring their ultimate safety. “We procured enough Personal Protective Equipment (PPE), trained people how to use it, modified shifts to alleviate the discomfort of wearing PPE for long hours, etc. We also worked on their transport, logistics and their food and supplements to boost their immunity.”  Offering another perspective from the hospital sector, Sanjay Sinha remarked on how the medical services industry has had to learn-on-the-go as there is no playbook for the current crisis. “Based on past experience the medical team came up with Standard Operating Practices (SOPs) and protocols that should be followed with respect to patients.” He explained how his staff were empowered as a result of these SOPs since they did not have to wait for decisions to be made at higher levels. Various other modifications had to be made in schedules and delegation of authority, to adapt better to this unprecedented situation.   Taking the discussion to a different human resource issue that has arisen during the current crisis, Shashi Kumar said, “People are concerned about losing jobs and income. At Indeed we’ve decided that the harder it becomes for people to find jobs, the harder we will work to help them find jobs. We’re working on a war footing.” He went on to narrate how his company is seeing reduced activity in most industries but sectors that are strong continue to hire, although on a much lower scale. “SMBs are getting impacted significantly, but also we're seeing enterprises planning for the future. It is important for companies and jobseekers to remember that when this is over, there's going to be very sharp increase in hiring activity. All of us need to be prepared for that,” he reassured.  The panel of CHROs went on to envisage how the current situation could change the future of work and people’s work habits more permanently. Most of the panelists concurred that it could result in more work-from-home opportunities in future, if this unintended ‘social experiment’ delivers positive results, in terms of productivity and cost structures and its impact on teams, individuals, families and the environment. If the outcomes are clearly beneficial, the current work-structures could become the new normal.  They also expressed views on how hierarchies would collapse and teams would become more relevant as leadership emerge based on the situation and great ideas come from anyone on the team. People have already begun to empathize with each other and see each other as human beings, rather than superiors and subordinates. They are realizing that everyone faces the same issues in their social worlds, thanks to online meetings that take place in their respective homes.  Hiring, on-boarding, training and upskilling would also become a whole new ball-game as it would shift online and e-learning would become more common as mindsets are changing. Greater speed in communication is also likely to emerge as people have become more familiar with online meetings and connects. Last, but not the least, the experiences gained in terms of quickly creating SOPs to manage crisis times will hold CHROs in good stead in the event of unexpected eventualities in future.