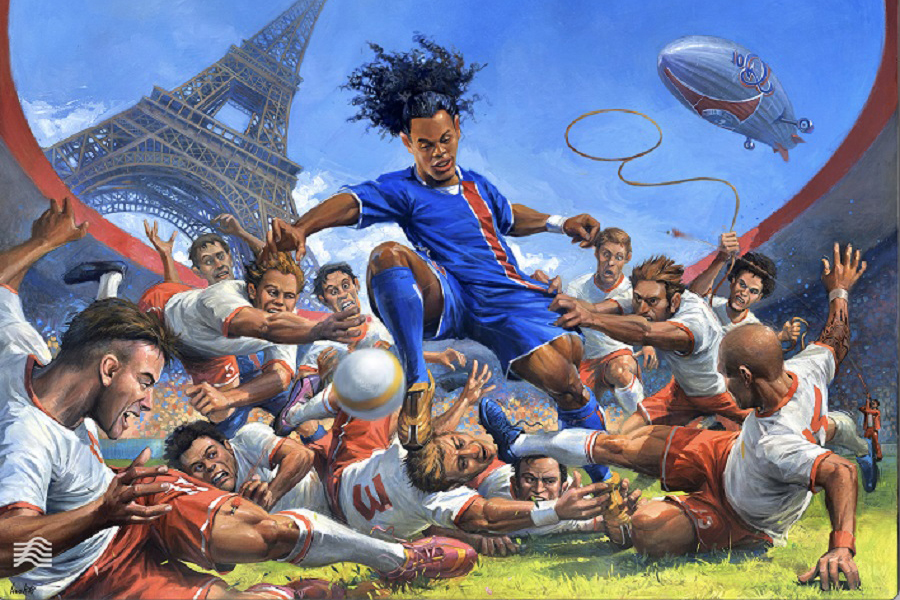 In 2021 the rise of non-fungible tokens (NFTs) has been nothing short of phenomenal. In the art world in March the ‘shock of the new’ came in the form of a $69.3 million sale of a digital collage at Christie’s. But the real mass market for NFTs in 2021 arrived with the NFT-enabled ‘makeover’ of the National Basketball Association (NBA) sports collectibles, with over $200 million in sales in February and March alone. Until now the global game of football has lagged behind, this is starting to change. Italy’s Serie A has started offering NFTs, with collectibles including match highlights made available to celebrate the 2021 Coppa Italia final. And now with the recent announcement of a limited edition NFT collection featuring two-time FIFA World Player of the Year, Ronaldinho it seems certain NFTs are about to take the world of football by storm.

Up until now technology in sport has pushed in the other direction from NFTs which accentuate the scarcity and uniqueness of sporting moments. In the past this took the form of football cards, traded among fans and friends, with some being sold and bought on platforms such as eBay. Globally there are hundreds of millions of football fans whose childhoods included collecting, swapping and trading cards. With the advent of NFTs the digital makeover of trading cards involves the upgrading of images for high quality video clips, blockchain-based certification for authentication agencies, and digital displays in the form of smartphones for binders, and online trading platforms for offline collectors’ events.

But what NFTs bring is something quite different, the application of technology to create scarcity. For the first time a football fan can become the owner of exclusive pieces featuring the Brazilian world-class soccer star. Daniel Liu, partner at investment backers INBlockchain and INFLUXO CEO explained: “Our trusted platform, seamless user experience and trusted team of investors and developers has allowed us to secure Ronaldinho for the platform’s first collection and we’re thrilled to show what’s in store for the future of digital collectibles.”

For football fans the attraction of NFTs comes down to their power to deliver that specific type of uniqueness that ownership brings. While this form of ownership may feel unfamiliar to older football fans, it comes as no surprise to a younger generation of fans already used to spending money on virtual currencies within video games. In other words, they offer the same kind of ‘bragging rights’ through use of a smartphone, that once physical football cards gave an earlier generation of fans.

Ronaldinho’s NFT ‘Masterpiece’ collection sits on the Influxo marketplace, where you can browse, buy, and bid on high-quality NFTs endorsed by world-class celebrities and artists. Collectively called ‘INFLUXO X Ronaldinho’, as well as the NFTs there is a set of Sports cards. ‘Football Magic’. Ronaldinho's career saw him win the UEFA Champions League as well as two La Liga titles with Barcelona and a Serie A crown while playing for AC Milan with the 2005 Ballon d'Or and his 2004 and 2005 FIFA World Player of the Year awards among his many individual accolades. With INFLUXO acting as the gateway, supported by blockchain technology providers BigONE, it’s an exciting opportunity for the most dedicated fans to collectible digital assets and real-world experiences.

“I’m so excited to share this news that @Influxo_NFT is launching a series of NFTs in my honor, giving my biggest fans the chance to bid for my unique NFT digital collectibles, and to collect the seven exclusive sports cards, said Ronaldo de Assis Moreira, famously known as Ronaldinho.  “I love the fact I’ll get the chance to meet my fans in person in Dubai next year, including all the NFT auction winners, and one lucky fan with the full set of sports cards. The devotion of football fans is what help make the global game of football truly special, so it’s really good to celebrate this with my fans all around the world.”

Liu confirmed the NFT collection will include seven unique ‘Masterpiece’ series, together with a complete sports card NFT collection all endorsed and signed by the footballer. They depicting Ronaldinho playing football, futsal, footvolley, e-sports, teqball etc. The cards will be a limited edition of 1000. The NFTs are based on original pictures created by Camaleão, a world-famous artist who specializes in creating physical canvases. The artist said that the creative idea that inspired the pictures of Ronaldinho was to depict fragments of his footballing genius. To bring these into the NFT world INFLUXO partnered with a world-leading animation studio to digitize Camaleão's canvases, confirmed Liu.

Anndy Lian, founding partner of INFLUXO and Chairman of BigONE which is providing the platform that supporting Ronaldinho’s first NFT digital collectible sale, says he’s delighted to be working with the Brazilian star. “We are happy to work with Ronaldinho on this very special NFT launch, using our safe and secure blockchain technology to make sure it all runs smoothly for him, and all his fans around the world.”

While in 2021 NFTs have risen to prominence in art and sport, and the legion of football fans have yet to enjoy access to a NFT marketplace, this is starting to change says Lian. “The beauty of NFTs is that they can capture the kind of dynamic moments that are the 21st century version of the beloved, but static football cards. And for football clubs and leagues they have the potential to provide much-needed form of revenue.” While NFTs confer ownership, the copyright remains with the club or player.  “The sky’s the limit, the beauty of NFTs is that they aren’t just for digital collectibles, they can be used to prove ownership for traditional football cards, through to player’s shirts and other sought-after memorabilia”, Lian added.

The seven NFTs from the Ronaldinho collection will be made available to fans through a live online auction process, with a starting bid price of 20,000 USDT. The idea is that the winners of each auction will in addition to the unique collectible NFT also receive the opportunity to participate in a unique experience, meeting with Ronaldinho in Dubai next year. The experience includes a round-trip ticket and a two-day hotel stay, as well as a gala dinner and of course the meeting with Ronaldinho himself.

To take part each bidder must show proof of funds and have enough money locked in their wallet at the start of the auction in order to start bidding; in addition, each bidder has to place a minimum increment bid of 10,000 USDT. The specialist auction process is designed so that in the final hour, there will be an ‘extra time’ period, which requires a bid to occur only if and when the increment amount is 10% of the current auction price. The final and highest bidder wins the auction. Once their bid is confirmed, and payment settled, all the other bidders’ locked money will be returned after the auction ends.

Sports legend card NFTs will also be available for sale for 299 USDT. A complete series consists of six cards and one airdropping card. Collectors who hold the complete set will also be entered into a sweepstakes for a chance to win the same Dubai experience with the NFT auction winners, with ten runners up winning a Ronaldinho-signed football shirt.
The pages slugged ‘Brand Connect’ are equivalent to advertisements and are not written and produced by Forbes India journalists.

Tweets by @forbesindia
With $2.84 billion box office earning, Avatar is highest grossing blockbuster till date
Photo of the day: Time for a prayer