Inventive and mysterious world of literary writings by Sabarna Roy 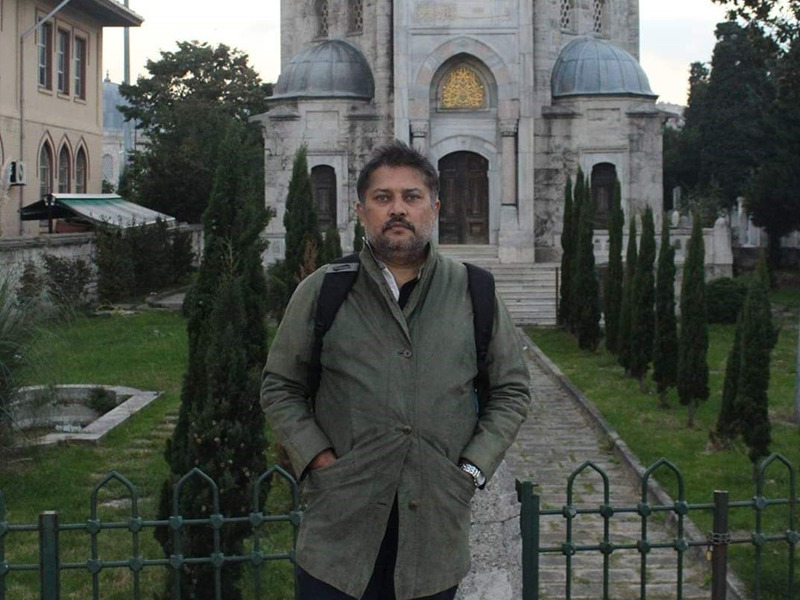 Sabarna Roy, in his own words, is not a trained author. He is a natural author with a flair for intriguing post-modern, urban characters and circumstances located in and around Calcutta/Kolkata and he writes his narrative in a sparkling lucid language devoid of adverbs and adjectives and remarkably with very appropriate use of articles. He delves deep into the psyche of each character and completes meticulous detailing of circumstances to bring out the truth of events and at the same time remaining unbiased towards his characters because, he says, he does not look into any phenomenon as a conflict between an alleged perpetrator versus an alleged victim.

He flips from one genre to another genre, and even within a chapter of a story and seamlessly welds them together to elaborate his point of view.

He has written five books till date. His first book was Pentacles that consists of a long story and four long narrative poems. The long story, titled: 'New Life' is written in a novellic manner, which is essentially an author’s dictation on philosophical views intertwined with the narrative around the protagonist, who was abandoned by his mother at an early stage of his life for the love of another man. The long narrative poems, namely, The Tower, 2001-2002, Chasing and Tara are full of strange and unique stories, made up of surrealism and magic realism.

The stories, set in Calcutta, bring to the fore the darkness lurking in the human psyche and bare the baser instincts. The stories, compactly written and marked by insightful dialogues that raise contemporary issues like man-woman relationships and its strains, morals and ethics, environmental degradation, class inequality, rapid and mass-scale unmindful urbanization, are devoid of sentimentalisation. The result is they remain focused and move around the central character who is named Rahul in all the stories. We encounter the events that shape, mar, guide Rahul’s life and also the lives of those around him, making us question the very essence of existence. Rahul symbolises modern man; he is not just one character, but all of us rolled into one. The story cycle stands out for two reasons – its brilliant narrative and the dispassionate style with which betrayal in personal relationships and resultant loneliness has been handled.

The poems weave a maze of dreams, images, reflections and stories. They are written in a reflective and many a time in a narrative tenor within a poetic idiom. The poems are inseparable in a hidden way and are magically sequenced like various kinds of flowers in a garland or chapters of differing shades in a novel. Calcutta features in some of the poems like the looming backdrop of Gotham City in a Batman movie.

Abyss is Sabarna Roy’s third book. Abyss is a full length play in two acts with an interval in between. It is essentially a racy crime thriller full of gritty suspense. Act one builds up slowly to result in a crescendo of conflicts between personalities and ideas finally to end with an unnatural death before the interval. Is it a suicide or a murder? Act two evolves through a series of incisive interrogations to unravel the truth, which is deeply disturbing and affecting. As the play unfolds into a very well-crafted situational thriller, underneath is the debate about using land for agriculture or for industry, the ethics of a working author and the nexus of a modern state all wonderfully enmeshed into its story line and the personal lives of its subtly etched out characters. The high points of the play are its central conflict between a mother and her daughter and its female sleuth – Renuka.

“Winter Poems-2012 is a series of 26 small poems; generally dealing with the idea of loss and coming to terms with gradual wasting of life.”

“Winter Poems employs the narrative style. The poems appeal to the mind and arouse feelings not only owing to the themes and ideas that I focus on, but more importantly due to the association created by the imagistic records and kaleidoscope of nature that enrapture the mind and are likely to stay rooted in memory.”

Sabarna Roy’s fifth book – Random Subterranean Mosaic: 2012 - 2018 Time Frozen in Myriad Thoughts –publishedin 2019 is a strange work of ideas, political opinions, tiny stories, letters, conversations, travelogues and food articles that seem to be distinctly different from each other and yet curiously stringed to each other like a mysterious chain of unique flowers.

Sabarna Roy’s books have been commercial and critical success and he is presently employed on his sixth project, which is essentially a narrative of ideas that deals with the certainty of uncertainty in life.

Sabarna Roy, by training, is a first class Honours Civil Engineer from Jadavpur University and has passed out in the year 1988 and he has been prolifically writing on complex technical issues in peer-reviewed National and International Journals. He is keenly interested in cricket, Artificial Intelligence, Machine Learning, robotics, anthropology and classical Western music.

Sabarna Roy’s characters are all around us. He has dabbled in poetry, prose, plays and non-fiction with equal elan and delved into the emptiness and futility of life reminding us of the masters in the trade.

Two quotations from Sabarna Roy’s works will prove the above stated point:

“A question leapt into his mind: Is it possible to achieve true happiness by living a solitary life or is it important to lead a community life where one instinctively believes that one’s own desires are insignificant compared to the desires of others and one works towards fulfillment of their desires as if they are one’s own?”

“Many questions crossed his mind. Did he secretly crave to believe in god? Was he looking for a god to deflect his loneliness or was his loneliness actually a sense of pride, which was an obstruction between him and his god?” Disclaimer: The pages slugged ‘Brand Connect’ are equivalent to advertisements and are not written and produced by Forbes India journalists.