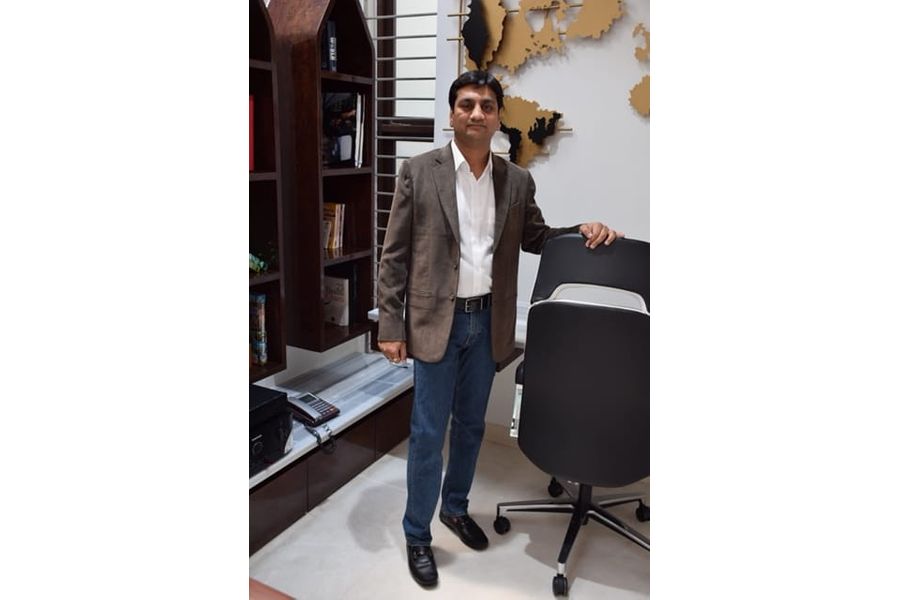 Mr. Vimal Malu of Malu Group was recently felicitated as “India’s Top Minds” Award by The Brand Story, acknowledging his managerial acumen, his contribution to nation building and social good.  Mr Vimal Malu is a second generation entrepreneur with a vision of prosperity for the coming generations. He is the Director of Malu Group of companies having Corporate Office in Bangalore, the IT hub of India. The business group has multiple manufacturing locations at Karnataka, Goa and Maharashtra. Principally into infrastructure development products, they manufacture and supply Pre-Stressed Concrete Railway Sleepers for Indian Railways, Transmission Line Poles for Electricity Boards, Galvanised Steel Wires Alloy and Non Alloy Products and do other EPC contracts.  Mr. Vimal Malu leads a few more businesses in the capacity of Director and Managing Partner. His significant contribution to Malu Group of companies has been in the form of starting a new product line that brought a revolution into the Pre-Cast Fencing segment. With Technology imported from the United Kingdom, he started manufacturing of Pre-Cast walls that had designs on both sides and were available in a variety of colours too!  With the tag line “Make your Neighbor Happy”, he launched this ‘First time in India’ product that was a huge success. 80% of this fencing can be reused or shifted by dismantling the Pre Cast Panels easily. This is a boon for the ever growing real estate market as people would like to secure their valuable piece of land with a fencing which can be easily removed when they want to start the construction activity without any loss to the investment that they have made into Designer Pre-Cast Fencing. Mr. Vimal Malu is the one who can be credited with offering choices in various colours in the Pre-Cast Fencing walls which otherwise was only available in the standard cement shade that looks very drab. From a business point of view; the best part about launching this Exclusive product was that there was no need to modify any current business structure while accommodating this innovative product. The product seamlessly fit into the already present range of products and energized the existing business. This product once again brought the company in focus or into the forefront of infrastructure development. It enhanced the image of the organization in the industry and made it stand on a higher pedestal amongst the many competitors. Mr. Vimal Malu is a Entrepreneur with fresh and new outlook towards the way things are done and believes in offering better products and services that are not just superior to the competitor products but even better than his own current line of products. He believes in continuous improvement in the processes and products to stay ahead of the competition. Setting new benchmarks in the industry with his vision and tireless efforts, this Director stays true to his designation. For him, it is not just about business and he believes in giving back to the society at every opportunity.  CSR activities of the organization have grown manifold over the years and Malu Group of companies have been recognized for their contribution to the society on multiple occasions.
With his new product, Mr. Vimal Malu not just received recognition in business circles but was also recognized by the Honourable chief minister of Karnataka state for using the designer Pre-Cast walls for beautification of parks. In November 2012, Mr. Vimal Malu was felicitated by the Honourable Chief Minister of Karnataka Sri Jagadish Shettar for beautifying several parks in his constituency with the Designer Pre-Cast Walls. This work enhanced the beauty of the parks. Recently, the relief work carried out by Malu Group of companies during Covid crisis was appreciated by the Honourable Chief Minister of Karnataka, Shri B.S. Yediyurappa. We have all seen the plight of the migrant labourers. It was a very difficult time for them as everything was shut down due to prevents the spread of Covid virus. Malu Group of companies came forward and provided shelter to the migrant workers in most of their factory premises. All the workers were provided with the essentials items to carry on with their life including water and food. The founder and CMD of Malu Group of companies, Mr Nandkishore Malu and his entire family have volunteered to help people in the Covid 19 crisis. Malu Group has also donated to CM Relief Fund.
The migrant workers who were staying near the outskirts of Bangalore city, Railway station and Bus stands were searched proactively and all these workers and poor people were provided with relief kits that included food packets, drinking water & mask More than 70000 food packets were distributed to the needy by the Malu Group of companies. The workers were also given health care and monitoring of their health was also done on a regular basis.    Through many such activities, Malu Group of companies has always been at the forefront of helping the society in times of need or otherwise. In these testing times when businesses were making losses already,  Malu Group has come forward to help the needy tide over the critical time that has thrown every individuals life out of gear.

In conversation with The Brand Story, Editor in Chief, Mr. Abhay Kaushik, Mr. Vimal Malu expressed that “Through our social activities, we commit to be there for the people in distress and will continue to support the government in all the ways that are possible. We stand in solidarity with our state and our country at all the times.” Disclaimer: The views, suggestions and opinions expressed here are the sole responsibility of the experts. No Forbes India journalist was involved in the writing and production of this article.

Tweets by @forbes_india
Laid off during Covid-19, these employees turn entrepreneurs
Stephen Orso on loyalty records: Discovering up and coming talent