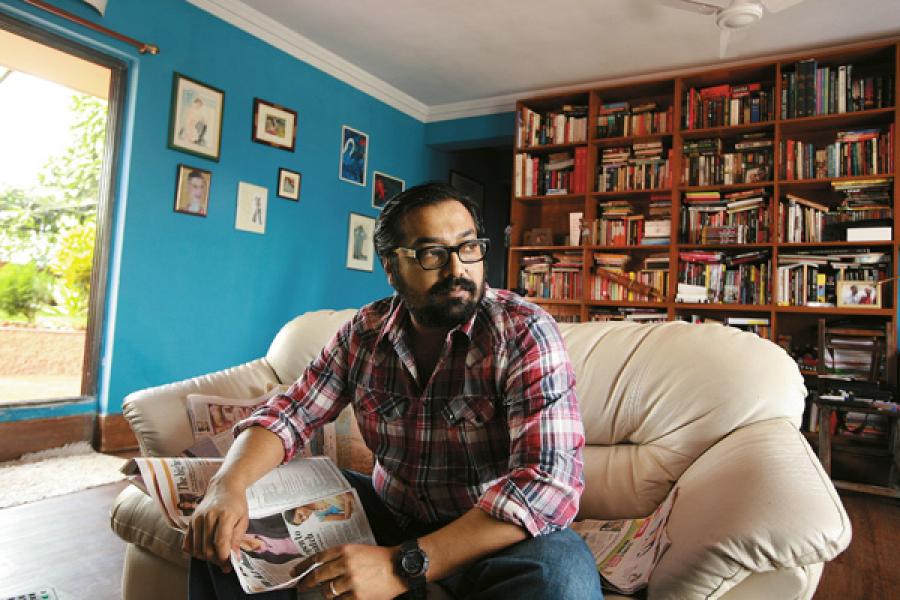 Image: Indiatodayimgas.com
GREEN SHOOTS Anurag Kashyap,founder of AKF, spends a lot of time on the script. Scripts often go through 10 redrafts before they are deemed ready

Of all the people in the world, I shouldn’t be a producer,” says Anurag Kashyap. “I don’t understand accounts. But someone has to step up and make these movies,” he adds. Kashyap, for those who don’t know, is best known as the director of Black Friday and Dev D. For those in the know, Kashyap is an uncompromising film-maker who makes the films he wants to make. One of his earliest movies Paanch, made in 2001, still hasn’t been released because of problems with the Censor Board. He knows the struggles that young film-makers face.

“Young people were coming up to me with these amazing scripts. And no one was ready to make them,” he says. That was when he decided to get into the business of producing movies. One of his first movies as a producer was Vikramaditya Motwane’s Udaan in 2010. Motwane was struggling to make the film before Kashyap roped in Sanjay Singh (son of politician Kripashankar Singh) and produced the movie for $725,000. Later, UTV Motion Pictures came on board as co-producers. That was the start of Anurag Kashyap Films (AKF). Kashyap kept getting good scripts and he knew he had to make them. But he also knew that he wouldn’t be the best person to look at the financials. Enter Guneet Monga.

Monga is a producer at AKF. Kashyap calls her his partner. “Anything to do with financials, ask Guneet, not me,” he says. Monga is the one who does the rounds of the film festival circuit, meeting potential collaborators and financiers.

To put it in her words, “Anurag has a full time job, reading scripts, advising, giving notes and multi-tasking on the creative process. Me, I think through the structure.” And structures are broken down frequently at AKF.

Kashyap and Monga do not go through the normal route of funding a movie out of their own pockets like a normal film studio. They don’t have enough money. Even if they did, they wouldn’t be able to make another film before recovering all the costs on the one film they make. To put in simply, they spread the risk among multiple investors and that gives them breathing space to handle multiple projects at a time.

AKF doesn’t take a script and go hunting for a big studio to try and convince it to fund the movie. It applies for grants from film bodies abroad, sells satellite TV rights around the world on the strength of the script, takes films to festivals, and gets wealthy film aficionados to partly or wholly fund their films.

AKF spends a lot of time on the script. Scripts often go through 10 redrafts before they are deemed ready. “Once we know the script is amazing, it just gets into a mechanical position of ‘okay, now who can fund this film, who are the actors we can go out to, how independent can we keep this’…” says Monga. A case in point would be Peddlers (working title), Vasan Bala’s film. Bala has been Kashyap’s collaborator since the last six years and has co-written Bombay Velvet with him. Bala had the script for Peddlers. Monga resorted to crowd funding for finance. She posted on Facebook and received responses from 150 people. “We didn’t want to spread ourselves too thin. I was looking for 10 entrepreneurs with Rs 10 lakh each,” says Monga. She got her 10 financiers. The total cost of Peddlers is Rs 2 crore. Half of that has been raised via Facebook. “The other half is for the cast and crew. That hasn’t been drawn,” says Monga. They get paid once the film is released and starts making money.

Crowd sourcing is not new in India. Director John Abraham started a group called the Odessa Collective in the 1980s in Kerala that funded its movies by taking money from the public; they literally used to ask people on the streets for money. Abraham’s film Amma Ariyan was critically acclaimed. But the movement died out after Abraham passed away suddenly in 1987. More recently, Onir funded his film I Am via crowd sourcing on Facebook.

However, he hasn’t replicated that model again. UTV’s Paan Singh Tomar did the festival rounds for a year before it got a mainstream release.

“Each film is structured differently,” says Monga. Director Amit Kumar had made a film called The Bypass that won a BAFTA award (British Academy of Film and Television Arts) in 2003. Kumar had an idea for a film that is now called Monsoon Shootout. An initial script was in place by 2007. He spent 2008-09 hunting for finance. It looked bleak. He bumped into Monga at a film party and she asked him what was happening to the movie. He told her that it was in limbo. “Anurag had seen The Bypass and he liked it. But he wasn’t in a position to help out then,” says Kumar. This time around things were different. AKF decided to make Monsoon Shootout. The film got into production in 2011. It was budgeted at $2 million. The film was sold to French TV channel ARTE for Euro 200,000. 35 percent came from a private equity investor from the Netherlands, AKF brought in 35 percent, 10 percent came from PE in India and the British Film Council gave 10 percent.

The other option is to go the grant way. Governments all over the world have institutions similar to NFDC (National Film Development Corporation of India) that hand out grants for films. Some are grants for scripts, others for post production and so on. That’s the route that AKF has opted for Bengali director Q’s Tasher Desh. Q (Qaushik Mukherjee) is the same person who made Gaandu, which got into the Berlin Film Festival last year. His next film Tasher Desh costs $1 million. 25 percent of the funds have come in via private equity from Kolkata, NFDC has given a grant and so has the government of Belgium.

These grants come with conditions. Some grants require scripts to be from the country. For Tasher Desh, it required the production crew to be from Belgium. The director of photography is Belgian as is a lot of the crew. A bunch of international artists have composed singles for the movie, including the likes of Susheela Raman, Sam Mills and the Asian Dub Foundation. The earnings on music are deferred.

But it’s not as easy as it sounds. There are very few of these grants and a lot of people applying for them. “That is true,” says Monga. “But that’s an excuse most people use saying there is no way they can get the grant. But how will you find out if you don’t try?” she says. Applying for funding like this is tedious. But AKF has proven that it can be done. Finding out about these grants takes time as well. Monga says there are around 2,000 influential people who meet at festivals like Cannes and Berlin. “I have met maybe about a 100, we have a long way to go,” she says.

Monsoon Shootout is in post production right now and should be ready in July. But it probably won’t be released in India until early 2013. It will do the rounds of the film festival circuit before that. “I had taken the script to Mumbai Mantra (Mahindra’s media vertical) and they liked it creatively,” says Kumar. “But during the financing stage, they said that you need to put a star in it. This is not a movie for stars,” says Kumar.

Wait, no stars? AKF suddenly sounds suspiciously art house. “Of course not,” says Monga. Profit is not a bad word here. It’s just that money takes time to roll in. Take Kashyap’s That Girl in Yellow Boots (2010). The movie was panned in India and is considered a flop. It cost half-a-million dollars to make. “Yellow Boots will move into profits next year. It’s travelling internationally now. We have sold it in Scandinavian countries. It released in the UK in March and also in the US. Once TV sales kick in, it’ll start moving into profits. This is content that needs to be handled with patience,” says Monga.

Monga says AKF is a long term player in the industry. Don’t expect its movies to start making money from the word go. “We’ll probably start showing profits only after a couple of years. But we’ll have a steady stream of films that’ll be made and the ones that have been made right now will bring in the money,” says Monga.

Some films from AKF have found their way to big studios as well. Bejoy Nambiar’s Shaitan, That Girl in Yellow Boots and the upcoming Michael are part of the Viacom18 stable. UTV Motion Pictures is co-producing Luv Shuv Tey Chicken Khurana with Anurag Kashyap. UTV has worked with Kashyap right since his early days, starting with Dev D and then on projects such as Aamir and Udaan. UTV understands niche films. Their Spotboy vertical has a long list of hits in this category. They have gotten into films at various stages. “We got into movies Aamir and Dev D right at the very beginning,” says Siddharth Roy Kapur, CEO UTV Motion Pictures. “For a film like Khosla Ka Ghosla, well it was independently produced and was doing the rounds of distributors within the industry for months before we first saw it . We immediately gauged its potential. All we had to do was recognise its worth and give it the release it deserved. We did that,” says Kapur. But how’s it working with Kashyap? “He’s a very creative individual and a superb film-maker. He is able to cultivate and nurture talent. In the case of Udaan, much like what happened with Khosla Ka Ghosla, the movie was brought to us during post production. We saw it and just knew we had to be associated with it. The rest, as they say, was history,” says Kapur.

What AKF is doing isn’t revolutionary. Films in the West have been made this way for a long time. What AKF has done is given a method to the madness. “Directors should only concentrate on making the film,” says Kashyap. Amen to that.