... that is the question dividing stock exchange promoters and policymakers over the listing of exchanges in India 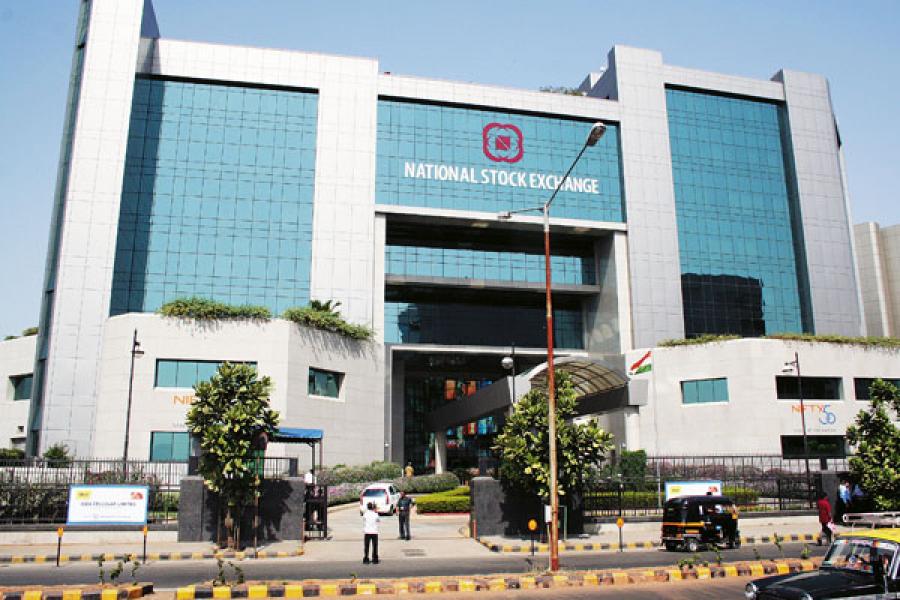 Committee appointed by stock market regulator Securities and Exchange Board of India (Sebi) has raised the hackles of prospective promoters of stock exchanges as it has suggested that such companies should not be allowed to sell publicly-traded shares or make unlimited profits.

If accepted, the panel’s recommendations would pour cold water on the plans of companies such as MCX-Stock Exchange, an exchange proposed by Financial Technologies. It will also somewhat lock down investors such as Goldman Sachs, Temasek Holdings, Premji Invest and Hero Honda Motorcycles, who had put money in the National Stock Exchange, possibly looking for a profitable exit on its going public. In fact, Financial Technologies itself is an investor in NSE.

The Sebi panel headed by former RBI governor Bimal Jalan that reviewed the ownership and governance of market infrastructure institutions (MIIs) has argued that an MII itself should not become a vehicle for attracting speculative investments. The committee has said that since they are public institutions, a fall in share prices could dent their credibility. However, it has also said that its recommendations should be revisited after five years, implying that the suggestions are guided solely by current realities.

While the committee has acknowledged that MIIs are economic entities that need to sustain themselves, it has pointed to their public utility-like nature and systemic importance to justify the stringent norms, including limiting profits. More importantly, exchanges function both as commercial entities and frontline regulators.

Over the past few years exchanges have proven to be a lucrative business as private enterprise blossoms in emerging economies such as India, attracting investors and speculators alike. Stock exchanges have developed into founts of wealth as well as a preferred avenue for raising capital.

Several fund managers Forbes India spoke to say that stock exchanges are good business, especially in markets such as India and China where the trading volumes are also increasing. “It is a good business to buy because once the initial infrastructure is set, it can do well as volumes increase,’’ said one fund manager. In 2009, the world’s biggest stock exchange, the NYSE Euronext, made a profit of about $220 million on revenue of $4.7 billion.

Yet, at least one exchange in India has cast its lot with the panel. “The overarching philosophy of the Jalan Report is that as long as the commercial and regulatory responsibilities are intertwined, there is a significant conflict of interest and nobody can take away from that. It is a fact,’’ NSE managing director, Ravi Narain, said at a discussion organised by the Confederation of Indian Industry.

MCX-SX promoter and NSE investor Financial Technologies, which has been leading the charge against the Jalan panel suggestions, was quick to respond to Narain asking him in an open letter in a business daily to clarify how he proposed to protect the interests of shareholders.

Historically, exchanges were associations that allowed only members to trade. Demutualisation of exchanges, the first step in the progression to a listed corporate entity, began as a consequence of heightened competition, according to a 2002 paper by Reena Aggarwal of Georgetown University.

“In the new environment, exchanges are no longer monopolies but must now be run as efficient business enterprises,’’ Aggarwal wrote in the Journal of Applied Corporate Finance.

The first exchange to demutualise was the Stockholm Stock Exchange which became a subsidiary of a listed company of OM Group in 1993, effectively becoming a publicly traded entity. Subsequently, most well-known stock exchanges such as those of Hong Kong, Singapore and London transformed themselves into publicly listed companies. 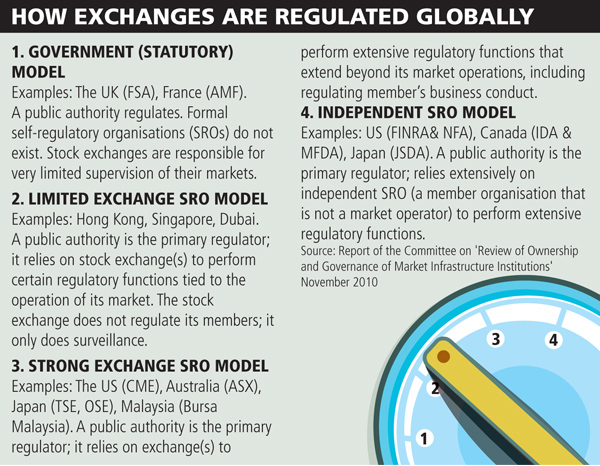 Infographic: Hemal Sheth
There is, however, a crucial difference between all these countries and India – most of them have highly developed public systems, institutions and more efficient markets. The impact cost of the most liquid stocks on the NSE is double that of stocks listed on NYSE Euronext. The US Securities Exchange Commission chairman is a political appointee who has to be approved by the Senate. The Jalan panel suggests that Indian conditions are not yet conducive for such leaps of faith.

The main reason why many people object to listing of stock exchanges is the regulatory function embedded in them and not many are confident that India is ready to hand over regulation to entities with significant commercial interests. Exchanges’ regulatory function makes them synonymous with the state. In fact, the Supreme Court has said that a stock exchange is state under Article 12 of the Constitution.

Corporate lawyer and NSE board member C. Achuthan says that it is best to segregate the two functions of exchanges. “If an institution is to perform commercial and regulatory functions, conflict of interest is bound to arise,’’ says Achuthan, who is also a former presiding officer of the Securities Appellate Tribunal. That is not easy either.

Sebi has the authority to take away the regulatory powers of stock exchanges. However, it will have to carry out that function itself, which is near impossible considering the enormity and complexity of market data. If Sebi fails to carry out regulation, then legislative amendments will be needed to set up a statutory regulator.