There will be several reforms in 2017: Bibek Debroy 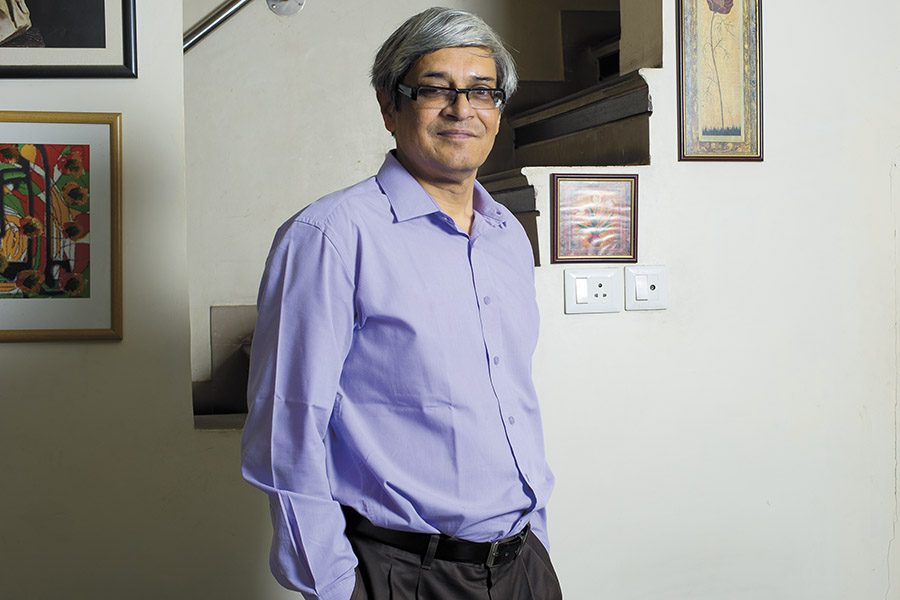 Niti Aayog member Bibek Debroy says the move to demonetise high-value currency should be looked at in a broader context
Image: Amit Verma

The year 2016 can be considered as the best for reforms in India since 1991. The way monetary policies are formulated changed for good with the setting up of the Monetary Policy Committee. A clear inflation target was specified to the Reserve Bank of India (RBI). Insolvency and bankruptcy laws were passed, paving the way for quicker resolution of bankruptcy cases in India from the current four years to about 12 months. The GST (Goods & Services Tax) Constitution Amendment Bill was passed setting the stage for the biggest indirect tax reform in the country’s history. Double taxation avoidance treaties were re-negotiated. The Aadhaar law was passed and subsidies were further rationalised. High denomination currencies were withdrawn in a bid to fight black money and digital payments were encouraged to expand the formal economy. But as Bibek Debroy, a noted economist and member of Niti Aayog, the government’s think tank, points out, more reforms are in the pipeline, especially in the way the budgetary process is handled. In a telephonic interview with Forbes India, Debroy talks about demonetisation, GST, reforms and job creation. Edited excerpts:

Q. Demonetisation has had a temporary impact on economic growth. When do you see a demand recovery?
What is going to happen to growth, I have no idea… I am quite prepared to buy that Q3 and Q4 [of 2016-17] will have some impact and from Q1 and Q2 [of 2017-18], it [the slowdown] will ease off. If someone comes to me and asks if GDP growth will fall by 1 percent, I have no means of knowing whether that is correct.

Q. What are the benefits of demonetisation that you see?
Your question is on the basis of an implicit assumption that everything is about November 8 [the announcement] which is actually part of a broader pattern. In this broader pattern, there are three
or four strands that are either happening or will happen, but not overnight obviously. One is a switch to less use of cash. I am not saying zero cash. The cash to GDP ratio in India is excessively high. Two, there will be a transition to a greater degree towards organised sectors across the board. This is not just on account of demonetisation but also due to other things like the Real Estate [Regulation and Development] Act and GST. The third is an institutional cleaning up that is happening particularly in real estate/land, gold (not jewellery), financing of some capital market transactions; the last one will be a long haul which is electoral funding.

Q. The government is betting big on digital payments, but people embracing it is a behavioural issue and that takes time. When do you see India becoming a less-cash society?
I think it is an incremental issue. If I look at the number of people who have bank accounts, it is phenomenal. Any figure you see on unbanked population is old. Here I am not talking about government figures alone. There are independent surveys which show 97 or 98 percent of rural and urban populations have bank accounts. Most people who have those accounts do not use them because they did not realise that they could use those accounts to do other things besides withdrawing money from ATMs using that little piece of plastic. That educative process is happening. If one says that the cash to GDP ratio is 13 percent now, I expect it to come down sharply to 10 percent. That is due to the immediate shock effect of the November 8 announcement. After that it will incrementally come down.

Q. GST is another measure that will expand the formal economy. When do you see it being rolled out?
There are two ways of looking at GST. One way is to say that this was my ideal GST and I will strive to get a consensus; and until I get that consensus, I will wait, which may be five years or 10 years. The other way to look at it is that I have got consensus on this. Let me start and I will tweak it as I go along. I am inclined to accept the second point of view. Fine, we have not integrated everything. Fine, we still have multiple rates, but at least this is a beginning. [As regards GST implementation] I think April 1 looks increasingly unlikely. We are probably looking at September 1. We have to wait for February 1 to see what the finance minister does. We can have movement towards GST without waiting for the legislation. We don’t really know what the revenue neutral rate is going to be. That depends on the GST Council. Let us assume it is going to be at least 16 percent. Without waiting for that, it is perfectly possible in this budget—now don’t get me wrong, I am not privy to what is going to happen in the budget—to move the service sector rates to the 16 percent level. Rationalisation is possible and we do not have to wait [till all GST issues are resolved].

Q. Will GST, in its current form, give the expected boost to the economy?
In every country which has done something comparable, it has taken 10 years [for the economic boost to materialise]. When I see any report which says that GST will result in a 1.5 percent to 2 percent increase in GDP growth, it has to have a caveat that it will not happen overnight.

Q. 2016 has been an excellent year for reforms. The GST Constitution Amendment Bill has been cleared, the Monetary Policy Committee is in place, exit laws have been passed, demonetisation was announced. What more needs to be done?
In some ways, 2017 is going to see many more reforms. This year will see a massive change in budgetary process—plan and non-plan expenditure, possible change in the fiscal year, completely redoing of all the public expenditure of the states in light of the 14th Finance Commission—that is going to be a very big change.

Q. What needs to be done to create more jobs in the economy?
It partly depends on the composition of the growth. Also how do you know jobs are not being created? The last good data we have on jobs is for 2011-12. Everything you are saying, like many people do, is anecdotal with the corporate sector in mind. My diagnosis is that the big problem is not that jobs are not being created but the quality of the jobs [that are]. For example, if I take the CMIE data, it is not showing any sharp increase in voluntary unemployment. It is showing a sharp increase in involuntary unemployment which probably means that having invested in education, people are no longer content in the types of jobs they did earlier, including agriculture. I am not disputing the fact that there is an issue of skills and there is demand for jobs in one place but the supply is in another place. But the discourse should be about the quality of jobs.

(This story appears in the 03 February, 2017 issue of Forbes India. To visit our Archives, click here.)

Tweets by @forbesindia
PVR will now screen a movie of your choice for you
Wydr raises Series A from Stellaris, Bessemer and Jungle Ventures