Like the “Color Revolutions” and their roots in the post Soviet Union space, “the Jasmine Revolutions” are the products of a very specific socio-political environment

All that is real is rational explained Hegel in the years following the French revolution, and he confidently added that whatever is rational is real. One can obviously discuss the exact role of reason in human affairs but there is certainly some degree of rationality in historical events.

Like the “Color Revolutions” and their roots in the post Soviet Union space, “the Jasmine Revolutions” are the products of a very specific socio-political environment. Irresponsible leaders, bad governance, a profound identity crisis, economic and political frustrations but also the failures of Western policies in the Middle East are some of the elements which explain the radical social movements changing the Arab world. In that sense, a “Jasmine Revolution” can not erupt and develop in the Chinese context. 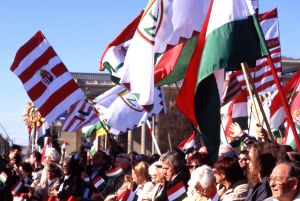 In fact, Deng Xiaoping’s “reform and opening up” is a continuous socio-political spring with Chinese characteristics, and, to continue the floral metaphor, could be described as a “Jasmine Tea Transformation”. More precisely, this transformation is a managed process of modernization on China’s own terms and in relation with the Chinese intellectual tradition, and not about a great leap toward the unknown.

The Chinese controlled metamorphosis is not only benefiting one fifth of mankind but is also for the global village an engine of economic growth, a guarantee of geopolitical stability and a source of new ideas. A “Jasmine Revolution” would be an interruption of an objectively positive “Jasmine Tea Transformation” and it is why it has fundamentally no raison d'être in post-Maoist China.

Even if the forces which are reshaping the Arab world and the dynamics which are transforming China can not be more different, some segments of the Western society seem to believe that anti-government protests could seriously disrupt the People’s Republic stability. On February 20, Jon Huntsman, the resigning US Ambassador in China and rumored Republican presidential candidate, marched on Beijing’s Wangfujing with a handful group of “Jasmine revolutionaries” – the American Embassy declared in an unconvincing statement that Huntsman’s presence was simply a coincidence!

In the world’s most populous nation, one can certainly encounter activists who advocate    radical changes but it is mainstream China which will determine the country’s future. According to the Washington-based Pew Research Center, 87% of the Chinese people were satisfied with their country’s overall situation in 2010 – the satisfaction rate was 72% in 2005. It is frustration and despair which took some of the 360 million Arabs to the streets of Tunis, Cairo, Sanaa, Tripoli or Amman, but energy, optimism and a sense of cheerfulness characterize the Chinese collective mood.

External prestige impacts internal politics. While China is gaining more and more psychological “face” as a strategic actor, the Arab world has been regrettably losing status and reputation. Able to stage world events in global cities – the Beijing Olympics or the Shanghai World Expo – China is a highly respected global player whose position is central on all major transnational issues. For decades, the Arab world has been unable to find a solution to the Palestinian question, and it is Turkey not Egypt which is the reemerging and stabilizing force in a region once dominated by the Ottoman Empire. Two years ago in The Geopolitics of Emotion, the French analyst Dominique Moïsi associated the Western societies, the Arab world and Asia’s Far East with, respectively, the sentiments of fear, humiliation and hope. Beijing’s undeniable reemergence has generated a sense of pride, and if, in the Arab streets a sentiment of humiliation prevails, China is filled with confidence.

“Merit may exist independently of dignity, but no dignity is without a certain merit” observed La Rochefoucault in one of his maxims (422). Domestically, objective socio-economic achievements speak in favor of the Chinese regime. The world’s second largest economy is actively building state-of-the-art infrastructures linking entire new cities where an euphoric consumption is often taking place. Some of the world’s largest companies have already realized that the “Chinese consumer” is the main business story of the coming decade.

If one can point at the remaining Chinese social problems, at the shortcomings of Beijing’s bureaucracy, at the risks of inflation or economic disparities, one has also to acknowledge that a system which took 400 million people – more than the entire population of the Arab world – out of poverty, and which put China in a position to become in the coming decades the largest economy in the world, has a solid legitimacy.

The Middle East crises can not be separated from failed leadership and dysfunctional governance. In the name of stability, power evolved into paralysis which, in some cases, degenerated into tyranny. Ben Ali ruled over Tunisia during 24 years, Hosni Mubarak governed Egypt for 30 years, Ali Abdullah Saleh has been the President of Yemen for 33 years and Muammmar Gaddafi monopolized the power over Libya for 42 years. In post-Maoist China, leaders enter the office temporarily in accordance with constitutional laws.

Since the establishment of the People’s Republic in 1949, Beijing has seen four generations of leaders, and in 2002 the transition from the third to the fourth generation took place between two  living statesmen in an orderly process. Next year, the transition of power from Hu Jintao to Xi Jinping – representing the fifth generation – at the 18th National Congress of the Communist Party of China is very likely to be smooth. Wan Gang, China’s Minister of Science and Technology, and Chen Zhu, the Minister of Health, are not even members of the Communist Party. To avoid complacency, the Western elites and public opinions should pay attention to the fact that the Chinese administration is able to select highly competent officials whose sense of responsibility is often remarkable. If corruption is, of course, also a Chinese issue, China is neither a corrupt nor a failed State.

Since Deng Xiaoping’s death in 1997, Beijing’s major orientations are decided by a collective leadership among which a consensus has emerged and which is supported by the vast majority of the Chinese citizens : the country needs reforms to perfect the rule of law, to create the conditions of a sustainable economic growth and to provide a better social justice, but not a revolution. In other words, China needs gradual change but no political disruptions or economic discontinuities.

Observers of the gigantic Chinese society should also remember that post-Maoist China can be better understood as a reaction against the anarchic and destructive moments of the Cultural Revolution. China wants stability and predictability and it will strongly oppose actions which could lead to chaotic uncertainties or vast and violent social movements.

Tourists not protesters ambulate on Tiananmen Square, and since the beginning of the year they can reflect upon a new presence on Beijing’s iconic open space : a massive statue of Confucius is now facing Mao’s portrait. 21st century Neo-Confucianism is not about revolutionary protests but ritualistic order, moderation and harmony. In its depths the Chinese world has no appetite for a revolution inspired by foreign references, China has embarked on a process of renaissance through the reinterpretation of its own tradition.

While Washington and Brussels will be occupied with the Middle East problems, China will continue to renew itself and, by doing so, will regain centrality in the world’s affairs. Chinese jasmine tea does not only exhale a delicate perfume but it is also a healthy drink; Beijing certainly does not need a “Jasmine Revolution” but the Arab world, and other parts of the developing world, might want to taste “the Jasmine Tea Transformation”.
David Gosset is director of the Euro-China Center for International and Business Relations at CEIBS, Shanghai & Beijing , and founder of the Euro-China Forum.