With 'Make in India' on the minds of both industry and government, expect frenetic negotiations at Aero India, the country's largest defence and aerospace event 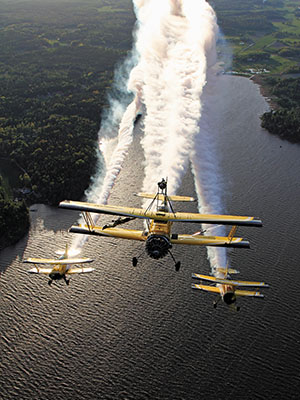 Image: Daniel Karlsson / WWW.Airshow.SE
Among the highlights of Aero India 2015 will be a performance by a Scandinavian aerobatic team. Women wing-walkers will display their skills mid-air

Aerobatic Aircraft from Sweden with women wing-walkers doing impossible things mid-air is the kind of eye candy that audiences at air shows love. And, happily enough, an ace Scandinavian aerobatic team is among four aerobatic display acts that will perform daily at Aero India 2015, being held at the Yelahanka air base in Bangalore from February 18-22, 2015. But loops and barrel-rolls notwithstanding, the longer-lasting action will take place on terra firma: Specifically in the high-end chalets where the who’s who of global aerospace will talk business.

India’s largest defence and aerospace event, now in its 10th edition, blazed onto the international air show circuit in 1996. It is organised by the ministry of defence, once in two years, as a networking platform for government and industry.

Over the years, the military-defence industry has edged out commercial aviation (airlines). Aerospace arms and equipment vendors dominate the air show, with minimal presence from airlines and business jets. Right from the first show, boosting defence production in India has been the underlying aim of the event. However, despite a steady growth in defence spend and new procurement procedures, ‘Make in India’ is still a very distant dream.

The big question at the event, to be inaugurated by Prime Minister Narendra Modi, is: Will the new government’s pro-business approach help turn the tide for Indian manufacturing?

“FDI (foreign direct investment) is the elephant in the room,” says Amber Dubey, partner and head of the aerospace and defence practice at KPMG. He is clear that there is unlikely to be much technology transfer at the (current) 49 percent composite cap. Unless the government allows 74 percent to foreign investors, nothing will happen, he says. “If we want really high-end technology transferred to Indian companies, this will have to start with ownership and control resting with the foreign partner. Otherwise, the danger is that Indian firms will continue to do work like making doors for aircraft,” he points out.

Dubey, like many others, is also concerned about the middling success of India’s offset policy. This policy states that for contracts above Rs 300 crore, foreign equipment sellers have to re-invest 30 percent of the value of the contract in high-end work in India. The trouble is that they get away without doing it. US defence giant Boeing, for instance, has won lucrative orders from the Indian Air Force (IAF) to supply transport planes. But among its investments is funding aircraft hangars (for Air India at Nagpur). Yet another criticism by private sector Indian companies like Bharat Forge and L&T, who are hungry for work, is that a majority of the offset contracts are bagged by DPSUs (defence public sector units).

Indications from Forbes India’s conversations point towards the hope that this will now change. About 600 companies, across defence production, software and services, are participating in Aero India 2015 with a renewed hope of generating business. While some want to leverage their low-cost base and showcase their capabilities to the global giants, most are looking to manufacture in India.
Larger business groups are present separately. The $100 billion Tata conglomerate is probably the most advanced in the private sector, in terms of contract work in progress. Fourteen of its group companies have partnerships/joint ventures that will be on display at the show. The biggest of these are Tata Advanced Systems (TAS) (components, aircraft sub-assemblies), Tata Motors (mobility platforms for the army) and Tata Power SED (electronics, missile systems). All the companies are looking for more high-end, high-margin work.

The Mahindra Group will showcase its abilities in aerospace, defence as well as engineering. “`We will roll out our eight-seater multi-utility aircraft, GA8, to Indian customers later this year. Right now, we are putting together a network for its sales and maintenance,’’ says Arvind Mehra, CEO Mahindra Aerospace.

Over the past five years, many global aerospace giants like the Airbus Group, Dassault Aviation, Lockheed Martin and United Technologies Corporation have been scouring the Indian markets, looking for companies they can forge partnerships with. They are building an ecosystem of Indian firms to whom they can outsource their global work at competitive rates and through whom they can serve the Indian market when orders from the Indian armed forces materialise. The show is usually a venue for the signing of such MoUs.

Christian Scherer, the Delhi-based EVP (marketing & sales) for Airbus Defence and Space, says, “Aero India is the most important show we will attend in the country this year.” Airbus Defence and Space has tied up with TAS to pitch for the IAF’s Avro (military transport) replacement contract. Scherer says, “We want to plug Indian suppliers into our global supply chain, and we need robust partners to enable us to invest in the ‘Make in India’ context. This is a fabulous opportunity for India’s private industry to build a market-leading aircraft at a realistic technology level.” On the last two days of the event, Airbus will have a recruitment fair to attract Indian aerospace engineers.

Global aerospace giants, who pitch for big contracts, are used to long lead times and delays that run into decades. Movement on stalled projects is slow and no big announcements are likely at the event. But back-room negotiations will certainly be in full swing.

A BAE Systems team led by CEO Ian King is pushing for a decision on the stalled sale of 144 Howitzers (light guns) to the Indian Army. The company has offered to shift the assembly line (used to make the guns) from the US to India. They have also appointed HDFC Group Chairman Deepak Parekh as non-executive director and chairman of BAE Systems India.

The French government and Dassault have been pushing to close the mega-deal for 126 MMRCA (medium multi-role combat aircraft). The Rafale was chosen as the aircraft of choice after trials, but the $20 billion-contract is yet to be signed. Disputes over Dassault’s liability for the aircraft that will be manufactured in India are yet to be resolved.

It is unlikely that a lot of roadblocks holding back ‘Make in India’ will be resolved at Aero India 2015. The Union budget is scheduled just 10 days after the show, and major policy changes, if any, will be announced by the finance minister in his speech. But with the military brass and the defence ministry rubbing shoulders with suppliers, the show will certainly be a catalyst for action in the future.