A Recent study states animals on wine labels are becoming an increasingly popular and lucrative way to sell wines.

Traditional branding strategy would say that a label should tell the consumer what the product is all about. New research suggests that just the opposite might be true–the consumer should see himself in the label.

Animals on wine labels are becoming an increasingly popular and lucrative way to sell wines. In fact, a 2006 report by the market research company ACNielsen finds that about one out of five table wines introduced in the last three years featured a "critter" on its label. Moreover, critter wines outsold other new table wines by more than two to one. 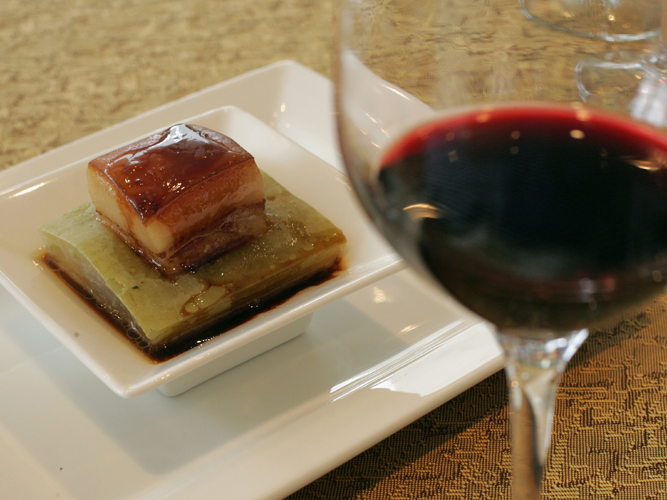 Image: STR New / Reuters
The decision to buy that product may also depend on the influence of objects, creatures, and events that touch the customer's life and how they make the customer feel about the product
A frog, a hippo, or a penguin may have nothing to do with the wine itself, but a new study–"Of Frog Wines and Frowning Watches: Semantic Priming, Perceptual Fluency and Brand Evaluation"–by University of Chicago Booth School of Business professor Aparna Labroo, Ravi Dhar of Yale University, and Norbert Schwarz of the University of Michigan suggests that such an unusual label can be an advantage. The reason goes deeper than just trying to grab the consumer's attention and turns conventional branding wisdom on its head.
A customer typically scrutinizes a product's color, durability, and other qualities before deciding whether to purchase it. However, the decision to buy that product may also depend on the influence of objects, creatures, and events that touch the customer's life and how they make the customer feel about the product. "People usually believe that the concrete attributes of a product–not subjective feelings–should influence our judgment," explains Labroo. "What we have done is to examine the feelings of ease or difficulty that get associated with a product."
For instance, a woman who has a son who loves Kermit the Frog may see and hear about Kermit all the time. Neither frogs nor Kermit have any relation to wine, but if this mother has to rush to the supermarket to buy a bottle because friends are coming over for dinner, then there is a good chance that she will reach for the wine with a frog prominently displayed on its label.
That may seem irrational, but the authors say that familiarity with Kermit the Frog actually makes it easier for a consumer to visually process the image on the label. This enhances the label's appeal and as a result makes the "frog wine" more desirable relative to its competitors.
Fluency and Liking
Researchers have shown that a person's opinion of an object becomes more favorable the more familiar the person is with that object. For instance, social psychologist Robert Zajonc found that after exposing Chinese characters to non-Chinese speakers several times, they preferred those characters to the ones that they had not seen. This is also true in marketing where exposure to logos, brand names, or pictures of products increases "perceptual fluency" or the ability to recognize the physical features of a product.
Similarly, prior exposure can also enhance "conceptual fluency" or ease with which a related product comes to mind. A 2004 paper by Labroo and Angela Lee of Northwestern University found that seeing an advertisement for mayonnaise increases liking for ketchup. Because mayonnaise and ketchup seem to naturally go together, the mayonnaise ad activates the ketchup product in the consumer's memory and makes the ketchup seem more attractive when viewed.
But one area that has not been explored is whether perceptual fluency can lead to a positive evaluation even if the consumer does not see an exact image of the product beforehand and even if the consumer is exposed to something that has no relation to the product.
Labroo, Dhar and Schwarz test this hypothesis by "priming" experiment participants in ways that will make them think about a certain creature, object, or concept. This replicates a situation in which a consumer is surrounded by familiar objects. If consumers see something in a product that connects with their personal lives, then that should make it easier to like the product. "If the environment reminds you of something, then you will see it more clearly on the product itself, and you will like it more," says Labroo.
The test becomes even more interesting because the authors use "visual identifiers" that are entirely unrelated to the product–like a frog on a bottle of wine. If consumers end up choosing that wine, then it must be primarily because its label pops out at them when they see it.


Frog Wines and Smiling Watches
In the first experiment, participants were asked to visualize a word. For instance, if they were given the word "frog" then they would have to imagine a frog. Participants were then shown two bottles of wine, one of which had an image of the word they were asked to visualize. They were then asked to choose which of the two wines they preferred.
A crucial part of the experiment involved exposing the two wine bottles for either 16 milliseconds or three seconds before participants had to make a decision. Several previous studies report that exposures of less than 50 milliseconds rely more strongly on perceptual processing. If participants who were asked to visualize a frog then picked the frog wine even if it was flashed at just a fraction of a second, it would indicate that they relied more on the ease of recognizing the frog on the label. Exposing the wines at three seconds, on the other hand, may make perceptual fluency weaker because it gives participants time to think and let other factors feed into their judgment.
The authors found that participants who were asked to visualize a word that was compatible with the image on one of the wine labels chose that wine more often than those who were not cued the same word. Moreover, this effect was stronger when the wines were exposed for 16 milliseconds than when they were shown for three seconds. This suggests that people choose products partly based on how easy it is for them to process its physical features. This is especially true when they have to make a quick decision and the most recognizable image will likely be the one that they are most familiar with.
"I see something that fits with my life so I pick it up," says Labroo. "But if I start thinking about it more, then I may start questioning how a frog on a label is unreasonable and maybe I shouldn't buy it."
In another experiment, the authors wanted to find out how close a match would be required between the word cues and the product's physical features in order to get a favorable review of the product. This time, watches were used instead of wines. Watches have the advantage of hands that can be set at 10:10 or 8:20 to resemble a smile or a frown, which allowed the authors to investigate whether such faces would make the watch more attractive.
Instead of asking participants to visualize a word, they were given a word-jumble puzzle with eight hidden words that they had to find. Four of the words suggested either a watch or some other product, while the other four implied a smile or a frown. They were then asked to evaluate a watch whose hands were set at either 8:20 or 10:10, as well as a competing product.
The authors found that participants liked the watch most when all eight words from the puzzle fully matched the features of the product. That is, people who were cued with both watch and smile words, liked the watch with a 10:10 (smile) face more than when they were exposed to any other combination of words. Conversely, participants preferred the watch whose hands were set at 8:20 (frown) when they were primed with words related both to a watch and a frown.
Thus, even a frowning watch can be desirable to some people. "What people think is negative can also improve evaluation if it's really something that fits with their lives or comes to their minds easily," says Labroo.
The Value of a Unique Label
A frog has nothing to do with wine, and smiles and frowns are not related to watches. But what this paper has emphasized is that unlike previous studies in conceptual fluency, visual features that have no meaningful association with the product itself can actually make consumers like the product, provided that these features are something that the consumer can easily identify with.
This means that critters on wine labels, however odd that may be, can be a good sales strategy. It allows a marketer to target a certain consumer by using images on labels that represent an important aspect of that customer's life. Moreover, there are potentially many ways to make that label as unique as possible because a logo would be chosen based on who the target customers are and not on what that product is.
This approach is radically different from traditional branding strategies that would propose grapes and vineyards as suitable images on wine labels. The problem with this conventional approach is that grapes and vineyards are associated with all wines. A unique label, on the other hand, cannot be shared by competitors and can be built into the brand's equity over time.
Research by Aparna Labroo. Aparna Labroo is associate professor of marketing and the Robert King Steel Faculty Fellow at the University of Chicago Booth School of Business
"Of Frog Wines and Frowning Watches: Semantic Priming, Perceptual Fluency and Brand Evaluation." Aparna A. Labroo, Ravi Dhar, and Norbert Schwarz. The Journal of Consumer Research, 2008.

Tweets by @forbesindia
Naresh Goyal is Flying Solo
Going for the Goal: The Human Psychology of Rewards