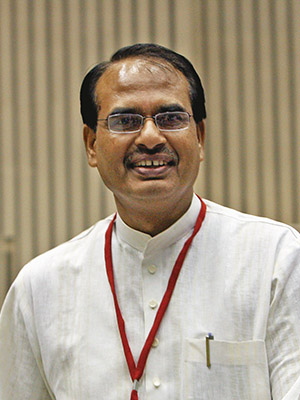 
Q: What are the elements of Madhya Pradesh’s growth?
We have a road map for balanced growth. We have focussed on infrastructure, roads, power and water. Once we were done with that, we targeted agricultural growth because 67 percent of our population is dependent on farming. We gave bonus, interest-free loans, and subsidies so that capital remains with the farmer. We also increased irrigation coverage from 7 lakh hectares to 21 lakh hectares.

The other thing is farming cannot sustain us for long. We need investments [in industry]. We also realised that we needed to increase the skill levels of our youth because if they earn and spend, the economy will become vibrant. To ensure that the fruits of development reach the poor, we started health, education and other good governance schemes. The result is in the 11th Plan; our average growth was 10.2 percent and in the first year of the 12th Plan it was 11.9 per cent; agriculture was 18 percent and dairying was 22 percent.

Q: Despite all these efforts why are human development indicators such as school-dropout rates, IMR (Infant Mortality Ratio), MMR (Maternal Mortality Ratio), and malnutrition high in the state?
Forget dropout rates. Until 2003, 29 lakh children never went to school. We started the Hum School Chalein campaign. Last year there were about 1.25 lakh students who could not be sent to school despite our efforts. But the rest are in school. To encourage them to stay in school, we started giving scholarships from the first standard. We will give away books, mid-day meals and uniforms.

Coming to malnutrition, MMR and IMR, I am very concerned about these three issues. There are various reasons for malnutrition: One is interval between childbirths. Wherever the gap between the first and second child is about one-and-a-half years, maternal health and consequently the second child’s health is poor. We cannot have a family planning law. We can only tackle this by creating awareness. We are trying by serving nutritious meals in anganwadis in areas where malnutrition is high. Some areas are remote. Many places do not have anganwadis. We are doing our best. It is a long haul.

Q: You have supported the Jan Satyagraha Yatra of Ekta Parishad for land for the poor. 38 percent of MP’s population belongs to the SC or ST category. Why did you amend the Colony Act that reserved 15 percent of land in new colony developments for the economically weaker sections?
We have our own path to uplift the poor. Laws should be made in such a way that people are able to do something. If you make laws that turn away people then neither the rich nor the poor will benefit. It is common sense that anyone who wants to invest would seek a profit.

Ever since we made the law, new colonies stopped coming up. Project developers started thinking that if they gave away that much they will hardly be left with any profit. So they offered to pay money in lieu of the land. They said you take the money but it will be difficult for us to build for the rich and poor at the same place. We amended the law considering these difficulties. And we started the Mukhyamantri Antyoday Awas Yojana and Mukhyamantri Awas Mission under which we build homes for the poor. Many a times you have to take corrective steps after seeing the consequences.

Q: At the global investors’ meet, you signed MoUs that put together could entail a capital investment of Rs 4.31 lakh crore. How much of it will you be able to convert on ground?
Projects worth about Rs 3 lakh crore promised at the last two investment summits have already been implemented or are close to completion. However, projects worth about Rs 1.25 lakh crore failed to materialise. We’ve been very cautious this year and looked at each project carefully, except for a few that were signed at the last minute. Hence, we expect a high rate of conversion.

Q: What is it that you’re doing differently to make your conversion rate so high; higher than even that of Gujarat?
Gujarat is Gujarat; it’s a developed state. We cannot compare it with Madhya Pradesh. The NRIs alone invest so much there. MP is just trying to flex its muscles a bit now. But I don’t compare myself with anyone. I’m not a political person. I’m an ordinary man. I try to do the best work in my state.

Q: Won’t you face the same problems with coal and environment clearances there?
We will have to fight. There is no other way. We need the Indian government’s clearances. We will ask for them. Similarly, the Zee group had also signed a MoU and purchased land to build an entertainment park near Bhopal. That has also not materialised but they have promised new investments.

Q: How will you set up a knowledge city in Chambal where the Zee Group wants to invest? The region is still quite inhospitable.
We have about 30 lakh hectares of available land in Chambal. What will you achieve if you don’t dream? I was told that Narmada waters cannot go into the Shipra River. It is impossible. It will take a lot of money. I said I’ll take it and I am taking it. The tenders are done. It didn’t happen for 40 years but it will happen in the next five because I dreamt of it. Today I dream that I’ll create a knowledge city (in Chambal) because it is near Delhi. There is a fine four-lane highway and available land. Tomorrow, when nobody will get land anywhere else, they will have to come here. Some things are achieved with your will. When you decide that it has to be done, a way is found.

Q: Which title do you prefer – kisaan ka beta or CEO of MP?
In a democracy, the elected chief minister is always there to serve the people. If I am humble, the reason for that is I consider myself a public servant.

Q: Would you like to serve a larger number of people nationally?
My current focus is Madhya Pradesh. If I serve the people of MP, I am improving its population of 7.5 crore, their future and standard of living. That way I am contributing hugely to the development of the nation as well.

Q: But you are a person who dreams with your eyes open. Are you seeing a larger dream?
My dream right now is only Madhya Pradesh. And I believe if I serve the state then I am serving the nation and the world. This is my area of work and this is my limit.