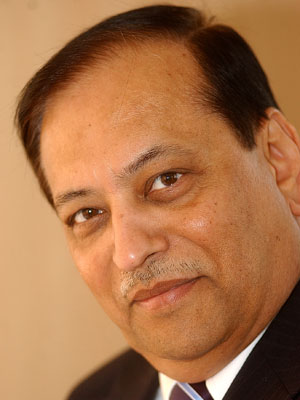 Pranay Vakil
Age: 65
Profile: Chairman at Knight Frank Private Limited in Mumbai, India. He co-founded this joint venture company in 1995 with Knight Frank, UK.
Career: Has provided consultancy services to corporations on mergers and takeovers in the real estate market for 18 years. Co-Chairman of the Federation of Indian Chambers of Commerce and Industry and Member of the Urban Development Committee of Confederation of Indian Industry
Education:  BCom, LLB and Chartered Accountancy
Interests: Music, travelling, contributing to old age homes

Q. Why is it that real estate prices are not going down at a time when the demand for property is slowing?
Sometimes developers don’t pay at all for the land that they are exploiting.

Q. How does this work for large complexes?
If you have a complex of 10 buildings, no developer is going to start all 10 buildings together.

In general, the developer has only committed the cost for two buildings at the most. Most developers open up booking at the time his plans are sanctioned. The building is still under construction but he opens up for sale and starts collecting money. So again his construction is being funded out of collections through the sale of flats.

Q. How do existing buyers react to price drops?
After having bought the property a buyer is not mentally reconciled to the fact that prices can go down.

Take the case of a developer who has opened up a building for sale and completed 25 percent of sales at say Rs 10,000 per square feet. The developer later on finds that there is a lot of resistance at this price so he wants to reduce the price to Rs 9,000 per square feet for the new buyers.

The first 25 percent of the buyers are paying at Rs 10,000 per square feet over the construction of the project and they will all come back to the developer and tell him to reduce their rates.

Q. Is this the same with real estate investors who collaborate with the developer?
Investors typically are known to underwrite projects for developers. These investors make money through leverage. If he has money to buy one flat, he will book five flats with a 20 percent down payment.

Sometimes he doesn’t have the intention of completing the payment because he wants the price to go up.

Tweets by @forbes_india
Letter From the Editor: The Slippery Slope of Success
NAC Reminds the Govt About the Marginalised