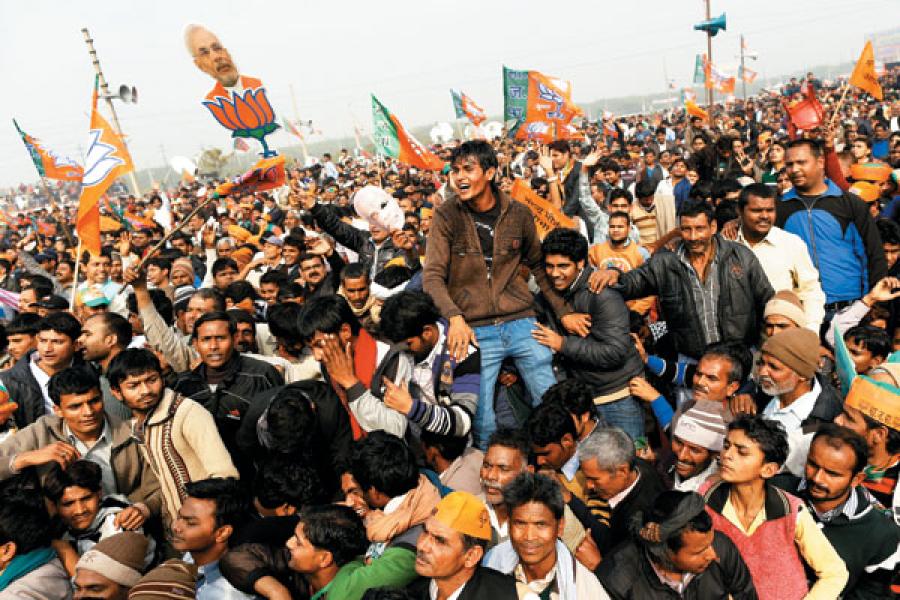 Image: Ahmad Masood / Reuters
Instead of looking to Modi to catalyse a dramatic revival in economic growth, the sensible thing would be to seek solid franchises which have been treated harshly by the market in the last couple of quarters

The most talked about risk among professional investors today relates to the outcome of the Lok Sabha elections and the prospect of a stable government thereafter. The smart money seems reasonably convinced that a BJP coalition led by Narendra Modi will rule the roost. Few investors seem rattled by the recurring subterfuge within the BJP and even less are paying any attention to the role of the RSS in a possible horse-trading scenario after the election results lead to a hung Parliament. Perceptions about risk are most often shaped by three characteristics of a situation:

It is widely known that the foundations of probability theory were built by carefully studying gambling outcomes. Two elements of this framework are of significant importance to investors—statistical distributions and expected values. Statistical distributions describe the probabilities of different outcomes of repeated random events. The most ubiquitous and frequently used distribution is the Gaussian Normal distribution, often the most precise descriptor of a wide variety of social and natural phenomena including voting intentions! Economists commonly assume that daily stock market returns conform to the laws of this distribution. While it is illuminating to know that this assumption is at the heart of some of the most popular financial theories, sadly it does not hold true.

The second key concept from probability theory is expected value. In an expected value calculation, for each option the probability of its occurrence is multiplied by its likely pay-off to determine the highest average return. Analytical decisions take into account characteristics like the reward matrix, probabilities and time delays for gains and losses. Yet the number of individuals who persist in buying lottery tickets, going to the casino and trading stocks on a daily basis—with negative expected value—does not seem to shrink. A fair number of investors trade stocks because they enjoy the emotional thrill. Liking something, regardless of mathematical outcomes, is called utility. Considering that the future of the stock market is typically uncertain, most investors make decisions based on expected utility rather than value. Decision theorists attribute a sense of utility to:
Not surprisingly, investors frequently pursue the decision that they expect will make them feel the best. In a tricky environment such as the stock market, people make systematic errors in estimating the odds and the pay-offs. In most instances these errors are influenced by feelings that arise while analysing uncertain or ambiguous information. But the real shocker is that even in a perfect world where all outcome information is known, investors still demonstrate biased decision-making. A study published in the Journal of Neuroscience mentions that investors show a marked preference for high-value, low probability gains in their trading behaviour. Intuitively, this suggests that the trader is systematically over-estimating the possibility of large gains. Put differently, when the outcome of a gamble has strong emotional meaning, people mentally overweight the size of the potential reward. The consistent and universal inability to assess the odds has tremendous implications for the thoughtful investor. As an illustration, there is considerable evidence that when an outcome is possible but not probable, people systematically over-estimate its chance of occurring (the possibility effect). Equally, when an outcome is likely, people tend to under-estimate its odds (the certainty effect). The fascination that amateur investors have for penny stocks is a direct consequence of such misplaced thinking. The truth is that our assessment of the odds shifts based on how others present information to us. Changes in the exact likelihood of being shocked have little impact on how scared we are!

The vast majority of individuals, more so investors, hate making decisions when they feel either uncertain or ambiguous about information available to them. Consequently, companies with “iffy” accounting or relatively weak earnings quality arouse disproportionately negative feelings among investors. This “ambiguity aversion” consistently results in mispricing which leads to such stocks delivering considerably superior long-term returns on a regular basis. The only occasion when investors willfully choose to embrace ambiguity is during periods of “irrational exuberance”. The dotcom IPOs in the late 1990s clearly benefited from the illusion that negative cash flows were related to an investment in the future! A fascinating reversal of ambiguity aversion occurs when people feel the need to make more money than that offered in a certain outcome. During the internet bubble, as portfolio managers scrambled to keep up with the Joneses, they may have felt a more acute need to take a chance to profit.
Investors are also uniquely susceptible to distortions in figuring out the odds when events are either novel or rare. Typically, investors fall prey to the possibility effect when some of the conditions below are fulfilled:

While it is next to impossible to always stay rational, it is important to be aware of what influences you might be exposed to that can distort how you assess the odds. The animated chatter about a dramatic revival in economic growth catalysed by Modi’s desire to spark “capital spending” is an outcome most of us crave for and is often perceived as being the unique prerogative of the BJP. While the imagery is extremely vivid, the possibility effect is just as clearly on display. Rather than letting the imagination run wild, the sensible choice would be to seek solid franchises which have been treated harshly by the market in the last couple of quarters. A number of well-run regional banks have been clubbed with their optically similar public sector brethren and provide outstanding opportunities for superior risk-adjusted returns.

Jammu and Kashmir Bank (Rs 1,496) has been seriously dented by the political strife that has plagued its home state in the last couple of years. Despite the turmoil and far greater competitive intensity, the bank has managed to extend its dominant market share in J&K and improve its net interest margin while preserving its above-average asset quality and impressive liability profile. The bank has an impressive low-cost operating model and has achieved 20 percent growth in business volumes without compromising capital adequacy or taking on excessive leverage. Loan loss coverage, productivity metrics, portfolio diversification and exposure to “stressed credit” compare positively with best in class. But what really ensures that the odds are stacked in your favour is the incredibly attractive and difficult to explain valuation: P/B of 1.25, PE of 6 and a dividend yield of 4 per cent based on expected FY2014 performance!

(Sanjoy Bhattacharyya is a partner at Fortuna Capital)

Tweets by @forbes_india
Inside Endgame: Second Act for the Blackwater of Hacking
Medidata Solutions: Using Software to Make Better Drugs