A Chinese COVID-19 vaccine has proved effective, its maker says

Sinopharm, a state-controlled firm said that a vaccine candidate made by its Beijing Institute of Biological Products arm had an efficacy rate of 79%

By Sui-Lee Wee and Amy Qin 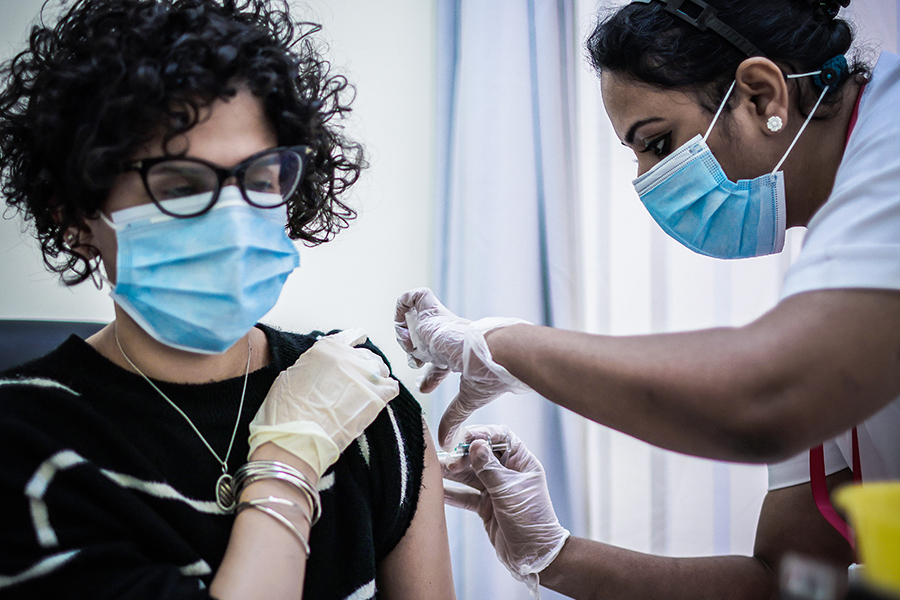 A woman is vaccinated with a syringe of a Chinese COVID-19 vaccine, developed by medicine company Sinopharm, by a nurse during the mass COVID-19 vaccination process at the Exhibition Center, in Manama, Bahrain on December 19, 2020;Image: Ayman Yaqoob/Anadolu Agency via Getty Images

A Chinese pharmaceutical company said on Wednesday that an early analysis of clinical trial results showed that one of its coronavirus vaccines was effective, an announcement that sent a positive signal for the global rollout of Chinese vaccines but lacked crucial details. The company, a state-controlled firm called Sinopharm, said that a vaccine candidate made by its Beijing Institute of Biological Products arm had an efficacy rate of 79% based on an interim analysis of Phase 3 trials. Sinopharm said it had filed an application with Chinese regulators to allow the vaccine to be used broadly. If supported, the results will bolster claims that Chinese officials have made in recent days that the country’s vaccines are safe and effective. Even without the government’s official approval, authorities have already moved ahead with mass vaccinations, defying industry norms. They plan to vaccinate 50 million people in China by mid-February, when hundreds of millions are expected to travel for the Lunar New Year holiday. But Sinopharm’s announcement, only a few sentences long, provided no breakdown of results and left many questions unanswered, adding to a lack of clarity that has dogged China’s coronavirus vaccine development for months. China’s drive to develop a homegrown vaccine speaks to the country’s technological and diplomatic ambitions. A successful vaccine would support the country’s claim as a peer and rival to the United States and other developed countries in biomedical sciences. The Sinopharm vaccine’s results show that it is less effective than others that have been approved in other countries. Still, the results are well above the 50% threshold that makes a vaccine effective in the eyes of the medical establishment. Two other coronavirus vaccines, made by Moderna and Pfizer-BioNTech, have been shown to have an efficacy rate of about 95%. The Pfizer-BioNTech vaccine has received authorization in more than 40 countries. Moderna’s vaccine has been authorized in the United States, and other countries are evaluating its trial results. Russia has announced that its Sputnik V vaccine has an efficacy rate of 91% and has begun a mass vaccination campaign. Beijing has leaned heavily on the promise of its vaccines to strengthen ties with developing countries deemed vital to China’s interests. Officials have toured the world pledging to provide Chinese vaccines as a “global public good,” a charm offensive that the United States may seek to counter, particularly when the campaign encroaches on its backyard. The political stakes in the race for a vaccine are particularly high for China’s Communist Party, whose authoritarian rule has been criticized for stifling information and playing down the virus when it first emerged in the city of Wuhan in late 2019. A successful vaccine, if quickly made available to the world, could help repair the party’s image globally and that of its leader, Xi Jinping. The Chinese companies have said their vaccine would be cheaper and easier to transport, which if proven could give them significant appeal in the developing world. Chinese vaccines may still be greeted with other questions. Scientists said that the headline figures released by Sinopharm were encouraging but that the lack of supporting data made it difficult for the results to be independently assessed. Sinopharm did not disclose the size of the trial population or information about any serious side effects, data points that scientists look for in such releases. “With each of these vaccines we’re dealing with bits and pieces of information, but the Chinese companies have provided even less information than the Russian companies have,” said Dr. Kim Mulholland, a pediatrician at the Murdoch Children’s Research Institute in Melbourne, Australia. “At least with the Russian vaccines we were told the number of cases and the basis of evidence for why their vaccine was effective,” said Mulholland, who has been involved in the oversight of many vaccine trials, including ones for a COVID-19 vaccine. Michael Baker, a professor with the department of global health at the University of Otago in Wellington who is an adviser to the New Zealand government, said that while the initial figures from Sinopharm looked promising, without more information it was difficult to know for sure. “It’s pretty light on the details,” he said. “One question is: What markets do they propose to use these vaccines in? Because if they want to have a global market, they’re obviously going to have to supply all those details.” Details about the efficacy of another Chinese vaccine candidate, made by Sinovac, a private Beijing-based vaccine maker, have also been released in a piecemeal fashion. Sinovac and Sinopharm use inactivated coronaviruses to make their vaccines — a tried-and-true method dating back over 130 years. The companies use chemicals to disable the virus’s genes so that it cannot replicate. Yet the inactivated coronavirus can still cause the body’s immune system to produce antibodies against it. By comparison, Moderna and Pfizer are taking a revolutionary gene-based approach that has never before been approved for widespread use. Experts say there are drawbacks to inactivated vaccines like the ones being made by Sinovac and Sinopharm. They require starting off with large batches of live coronavirus samples, which can pose a biosecurity risk. Once the live samples are inactivated, it takes an extra manufacturing step to ensure that none of them survive the treatment. Another advantage of the vaccines produced by Moderna and Pfizer is that they are faster to make and said to be more stable than traditional vaccines. Pfizer projects that it will be able to produce up to 1.3 billion doses in 2021, while Moderna expects to be able to make 500 million to 1 billion doses. The Chinese government has promised to produce 610 million doses by the end of the year and expects to make more than 1 billion doses next year. Several large countries like Brazil and Indonesia, where Chinese companies have been conducting trials, have each received shipments of more than 1 million doses of Sinovac vaccines. Turkey has ordered 50 million doses.

Tweets by @forbes_india
What happened in 2020: Beyond the virus and vaccines
Hypertension care in diabetic patients during pandemic