What happened in 2020: Beyond the virus and vaccines

Covid-19 took up most of our attention in 2020, but here's a look at some other significant events around the world, lest you missed them 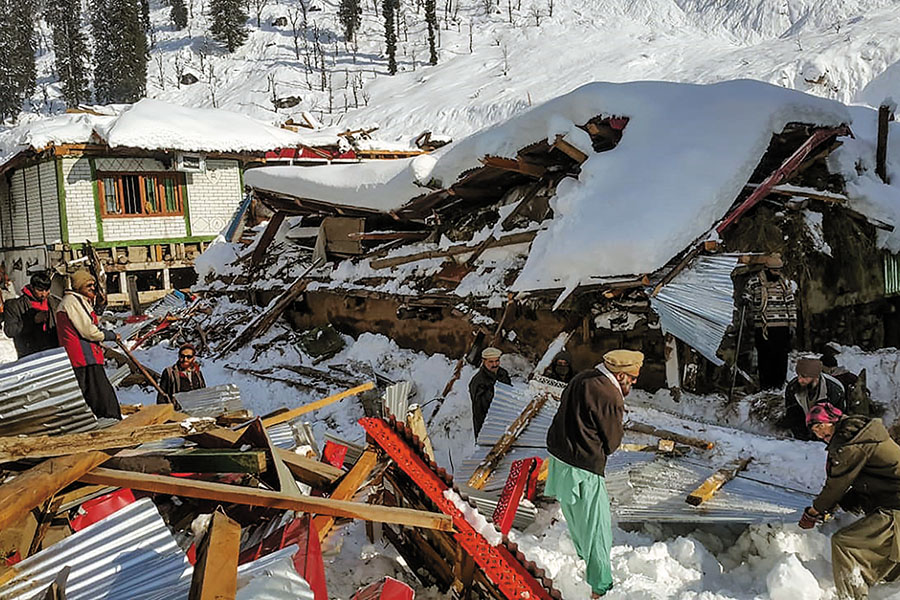 Locals clear debris of a collapsed house following snowfall that triggered an avalanche in Pakistan-admnistered Kashmir's Neelum Valley in January 2020
Image: STR/AFP  January 2020
Avalanches and landslides in Pakistan-administered Kashmir
Triggered by heavy rain and snow, avalanches and landslides killed more than 100 people and destroyed more than 200 homes in Pakistan-administered Kashmir and parts of Afghanistan. Although prone to weather disasters, the Neelum Valley in Pakistan, and regions such as Kandahar and Kabul in Afghanistan reported being severely hit, leaving many people cut off from help. Eight people were also reported dead in parts of India-administered Kashmir. Antarctica’s first-ever heatwave
Between January 23 and 26, scientists recorded the continent’s first heat wave after temperatures rose towards the end of the month, raising concerns that it could harm the flora and fauna in the region. During this period, minimum temperatures were higher than zero degree Celsius and maximum temperatures reached above 7.5 degrees Celsius. March 2020 Floods in East Africa  Nearly six million people have been hit so far by the seasonal flooding caused due to heavy rainfall in East Africa and 1.5 million have been forced from their homes. While some parts of the region have received the heaviest rains in a century, according to the United Nations, the number of people affected by these floods has increased more than fivefold in the past four years. April-May 2020 Sudan criminalises female genital mutilation In Sudan, 87 percent of women aged between 14 and 49 have undergone some form of genital mutilation. Removal of the inner and outer labia, and usually also the clitoris, has been common. Experts and activists say the ban has been long-awaited because of the various adverse health effects ranging from kidney and urinary tract infections to reproductive issues that women face as a result of this practice. Under the new law enforced since April 2020, anybody practicing FGM will face three years’ imprisonment and a fine. US Pentagon releases videos of ‘unexplained aerial phenomena’  In April, the Pentagon released three declassified videos showing US Navy Pilots looking at what appeared to be unidentified flying objects or UFOs. “DOD (the US Department of Defence) is releasing the videos in order to clear up any misconceptions by the public on whether or not the footage that has been circulating was real, or whether or not there is more to the videos. The aerial phenomena observed in the videos remain characterised as “unidentified”,” stated the DOD website. Locust and Hornet Attacks, India and the US 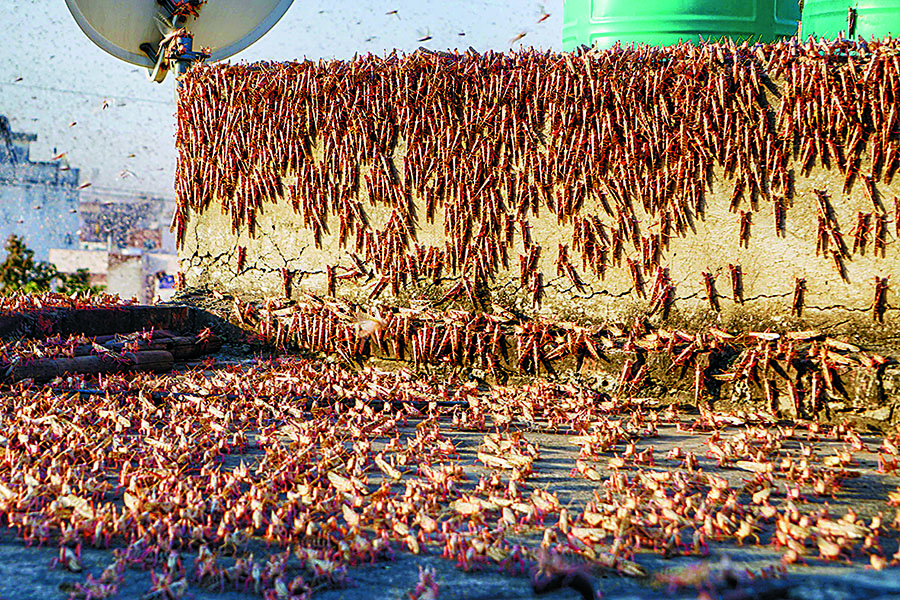 Swarms of locust in a residential area of Jaipur, Rajasthan
Image: Vishal Bhatnagar/NurPhoto Via Getty Images  On April 30, swarms of desert locusts hit parts of India and Pakistan in the middle of the pandemic. These insects, infamous for destroying crops, invaded more than 25 districts in India, while Rajasthan, Madhya Pradesh and Gujarat reported to be the worst affected states. Soon after, in May, the Asian Giant hornet, also known as ‘murder hornets’ arrived in the US. Its stings are lethal for humans but honeybees are their main targets as these hornets feed bees to their young. Hornets could kill entire colonies of bees and hence pose a threat to the pollinating insects. Scientists create enzyme to break down 90 percent of PET waste in hours  Water and soft drink bottles are made with a petroleum product known as polyethylene terephthalate or PET that takes large amounts of fossil fuels to be made and transported, and are not biodegradable. In April, scientists from France created a mutant bacterial enzyme that enables breaking down of plastic bottles over a couple of hours. They further said the leftover material can be recycled into new bottles of a high quality. Cyclone Amphan The first super cyclone to have formed in the Bay of Bengal since 1999, Amphan began in the Sunderbans in May before heading toward Kolkata, killing more than 80 people, and uprooting thousands of trees. Electricity and telephone lines were also down, leaving 14 million people without power and many others homeless. Even Odisha and areas in south-West Bangladesh were reported to have been destroyed by the deadly cyclone. Indo-China skirmishes  India constructing a new road in the Galwan Valley led to rising tensions between troops in India and China in May. A clash in June left 20 Indian soldiers dead. In August, India accused China of inciting military tensions at the Line of Actual Control, charges that were denied by Beijing. In the following month, China retaliated by alleging that India fired warning shots in the air, while India accused the Chinese of doing the same. These face-offs triggered a wave of anti-China sentiments in India. Experts have said talks are the only way forward. 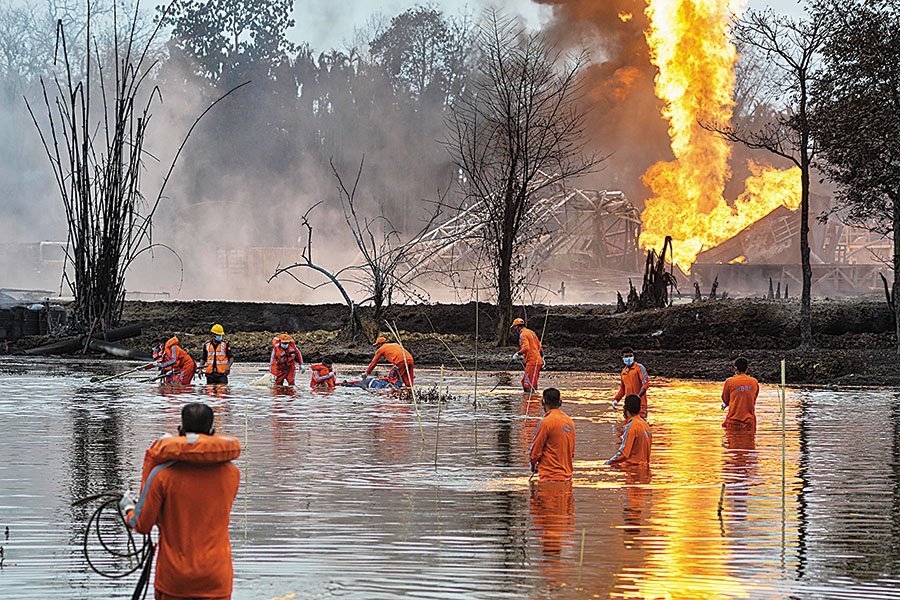 Rescue workers recover a body after an explosion a well run by state-owned Oil India in Tinsukia, Assam Image: Biju Boro/AFP Assam gas and oil leak On May 27, a natural gas blowout took place in Oil India Limited's Baghjan oil field in Tinsukia district, Assam. The leaking well in the oil field subsequently caught fire, and has resulted in two deaths and large-scale local evacuations. Given that the Baghjan Oil field is located near the Dibru-Saikhowa National Park in Assam, the environmental damage done is irreplaceable. The national park is the only riverine island wildlife reserve globally and is home to endangered species including Gangetic dolphin. Accordingly to several reports in the Assamese media, as of November, the fire continued to burn. Though several attempts have been made by Oil India Limited, they have been unable to douse the fire. June 2020 Cyclone Nisarga This was one of the strongest tropical cyclones to strike Maharashtra since 1891, and it was the first one to impact Mumbai since cyclone Phyan in 2009. It originated as a depression in the Arabian Sea, and then moved northward. Later it intensified to a severe cyclonic storm, turned to the north east and made landfall in south of Mumbai, near Alibaug on June 3. Six people died in Maharashtra, 16 were injured and over 5,033 hectares of land was also damaged. Tortoise with legendary libido finally retires
After fathering 800 babies and saving his almost-extinct species, Diego, the 100-year-old giant Galápagos tortoise, finally retired and was returned to his native island, Española, on June 15. Also nicknamed ‘sex machine’ Diego was brought to Ecuador’s Santa Cruz Island from California’s San Diego Zoo to take part in a breeding programme at a time when there were only two males and 12 females of Diego’s breed alive in his homeland. August 2020 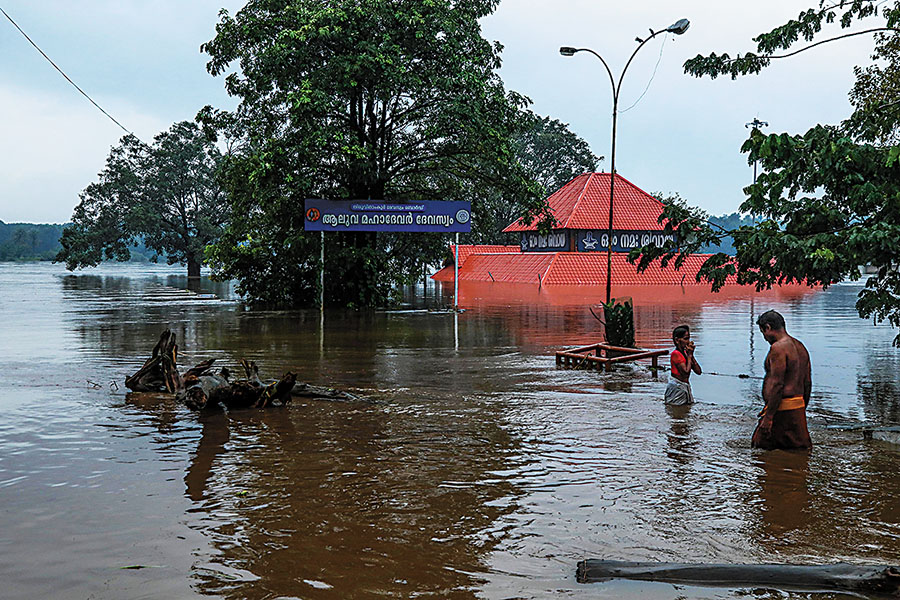 People wade through flood waters near a submerged Shiva temple in Aluva Mannapuram near Kochi, Kerala
Image: Arunchandra Bose/AFP  Kerala floods  Heavy rainfall on August 7 led to severe floods in Kerala. In the first ten days of the month, the southern state received heavy rainfall of 478 mm. The India Meteorological Department issued a red alert for districts Wayanad, Kozhikkode and Idukki. More than 132 lives were lost and property worth Rs19,000 was damaged. Around the same time, an Air India flight carrying 191 people crashed due to flooding in the Calicut airport runaway and lack of visibility due to heavy rain, killing at least 19 people, including the pilot.  New Zealand's Christchurch shooter pleads guilty  Brenton Tarrant, the man who killed 51 people in two mosques in Christchurch, New Zealand, in 2019 pleaded guilty to 51 counts of murder, 40 attempted murders and one charge of terrorism. As per news reports, the 29-year-old had planned to target a third mosque, wanting to "inflict as many fatalities as possible". This incident led to the banning of military-style semi-automatic weapons as well as parts that could be used to build prohibited firearms. 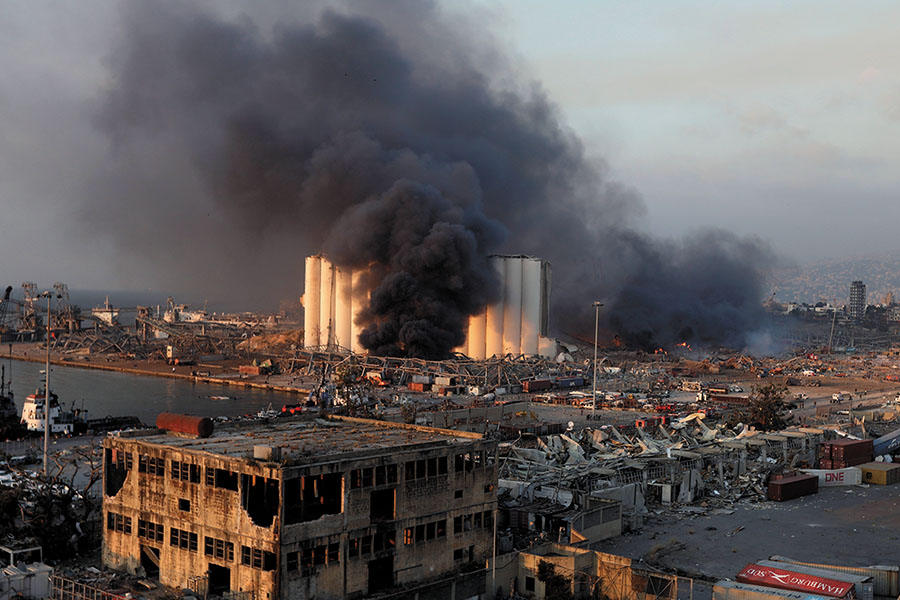 An explosion in Beirut, Lebanon, in August, killed more than 200 and damaged several buildings, leaving over 300,000 people homeless
Image: Mohammed Azakir/Reuters Beirut explosion  On August 4, approximately 2750 metric tons of ammonium nitrate stored in the port of Beirut, Lebanon, ignited and set off a blast that destroyed large parts of the ancient city. This only added to the population's misery that is already facing civil unrest, a socio-economic crisis and the coronavirus pandemic. According to WHO, the blast killed more than 178 people, left more than 6,500 injured and 300,000 people homeless. September 2020 Venezuela accused of crimes against humanity  The United Nations officially accused authorities in Venezuela of having “committed egregious violations” against civilians. Cases of torture, murder, disappearances and violence were investigated by the UN Human Rights Council. President Nicolás Maduro and many other officials were implicated, according to the UN. Venezuela's security services had been engaged in a pattern of systematic violence since 2014, aimed at suppressing political opposition and generally terrorising the population said UN officials. November 2020 'Save Mollem' Goa protests  Residents in Goa have been protesting against the state government's decision to speed up transportation of coal by introducing three major infrastructure projects. Residents claim that these projects are likely to destroy the state's ecological biodiversity. These three projects—the double tracking of railway lines, widening of the NH4A highway and the laying of a 400-KV power transmission line—threaten the forests around the regions of Mollem National Park and Bhagwan Mahaveer Wildlife Sanctuary, which would reportedly lead to chopping 59,024 trees. December 2020 Microplastics found in placentas of unborn babies  As per a study published in the scientific journal Environment International, for the first time, microplastic particles have been revealed in placentas of unborn babies. Though its health impact is unknown, it is "a matter of great concern", according to researchers. These microplastic particles are likely to have been consumed or breathed in by women during pregnancy. As per the report, there is a possibility that the chemicals carried in the microplastics would lead to long-term damage or upset the foetus’s immune system. What is alarming is that a dozen plastic particles were found in just the four percent of the placentas that was analysed. This means a lot more microplastics are likely to be found.