Russia's government has boasted of a low coronavirus mortality rate, but figures from an obscure city agency cast doubt on those claims 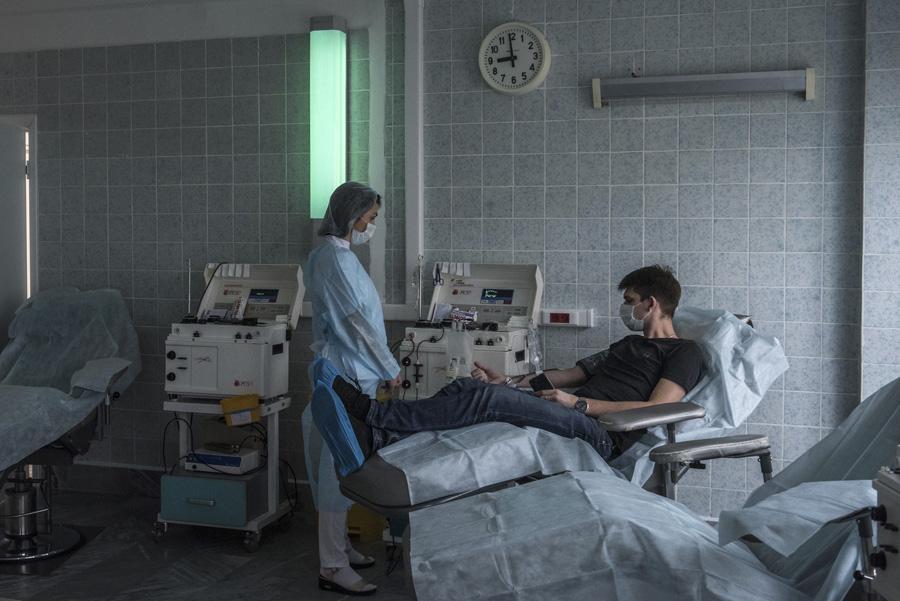 
MOSCOW — Ever since the coronavirus took hold globally, researchers have been puzzled by Russia’s mortality rate of only about 13 deaths per million, far below the world average of 36 in a country with a ramshackle health system.

With the arrival of data for April, however, the mystery appears to be clearing up.

Data released by Moscow’s city government Friday shows that the number of overall registered deaths in the Russian capital in April exceeded the five-year average for the same period by more than 1,700. That total is far higher than the official COVID-19 death count of 642 — an indication of significant underreporting by the authorities.

A similar picture has been observed in many other countries. In neighboring Belarus, for example — where the authoritarian leader Aleksandr G. Lukashenko has rejected calls for a lockdown as “frenzy and psychosis” — the reported death rate is about 10 per million. In Mexico, officials have recorded more than three times as many deaths in the capital as the government has acknowledged.

“Mortality figures in Moscow seem to be much higher than average for Aprils over the last decade,” said Tatiana N. Mikhailova, a senior researcher at the Presidential Academy of National Economy and Public Administration in Moscow. “One thing is clear: The number of COVID-19 victims is possibly almost three times higher than the official toll,” she said in an interview, adding that additional calculations needed to be made to come up with a precise number.

The new figures contrast sharply with the line that has been peddled by the Kremlin.

Speaking to President Vladimir Putin at the end of April, Anna Popova, the head of Russia’s consumer rights and human well-being watchdog, boasted that the country’s mortality rate was “among the lowest in the world.” Russian state-run television channels have been relentlessly advertising the country’s effort to fight the virus as superior to Western nations’.

On Monday, claiming success at slowing the spread of the coronavirus despite a sharp rise in infections, Putin ordered the end of a nationwide “non-working period” in force since late March.

Putin, speaking on state television shortly after health authorities reported the biggest one-day rise in infections, acknowledged that the pandemic had not yet been defeated but said it was now up regional governors to decide whether to lift or strengthen restrictions in their territories.

While the official number of deaths attributed to the coronavirus in Russia stood at 1,124 for Moscow and 2,009 nationwide as of Monday, arriving at a more accurate estimate will be highly complicated.

Thousands of people have left Moscow since the city government declared a lockdown in March, an exodus that would lower the number of deaths in the city. And many people could have died of other causes as at least 37 Moscow hospitals have been converted to treat only coronavirus patients.

Overall, about 70% of coronavirus-related deaths have not been reported in Moscow and about 80% in the country’s regions, said Aleksei I. Raksha, an independent demographer in Moscow. He was among the first to spot the April data, buried in an obscure government statistics website, as he has been studying mortality rates in the Russian capital and the country’s regions and comparing them with official death tolls.

The lower numbers, according to Raksha, can be attributed to the way that causes of death are registered in Russia.

“For most deaths, the registered cause will be the disease of the organ that directly caused it,” he said in an interview. “This is the way the system has worked for a long time,” he said, adding that he believes it is highly likely that the authorities at some level are manipulating this system to yield the result they want.

Speaking to the Echo of Moscow radio station last week, Georgi A. Frank, a senior Russian coroner, acknowledged that health officials have wide leeway in registering causes of death.

“In a number of cases, COVID-19 might not be the main cause of death — sometimes it can be just a background to the main disease,” Frank said. “Of course, there can be some manipulations, but decent doctors never allow it.”

Russia reported its first coronavirus death March 19, when a 79-year-old woman died in Moscow. Shortly afterward, the death was reclassified as having resulted from a blood clot and the case was removed from the official COVID-19 death toll.

More than 11,800 people died in Moscow this April, far more than during any other April since 1995, when Russia was engulfed in a post-Soviet economic crisis worse than the Great Depression. The number was posted by the Moscow government, which collects reports from the city’s civil registration offices that record vital events, such as births, marriages and deaths.

The death toll will be updated by the Russian State Statistics Service by the end of this month but is unlikely to change much. On average, the Russian capital has about 10,000 deaths each April.

Being by far the busiest point of entry into the county, Moscow has been the first area in Russia to be hit by the coronavirus. Still, it has lagged behind most other European capitals, registering only a few deaths before the middle of April.

Russian regions, in turn, have lagged behind Moscow. As of Monday morning, Moscow accounted for 52% of all reported coronavirus cases in Russia, with more than 109,000 people infected.

An even clearer picture of the true coronavirus death toll is likely to be revealed in the mortality data for May, when the virus began to grip Russia in earnest, experts said. About 45 deaths and more than 5,000 new cases have been registered in Moscow daily over the past week.

Tweets by @forbes_india
Covid-19: The risks involved in train travel, and how to stay safe
The Best Movies and TV Shows Coming to Netflix, Amazon this month