Are face masks the new condoms?

If people with no symptoms are spreading the coronavirus, as some studies suggest, it may be time to give face masks the kind of advertising and promotion that support condoms as lifesavers, especially in the HIV context 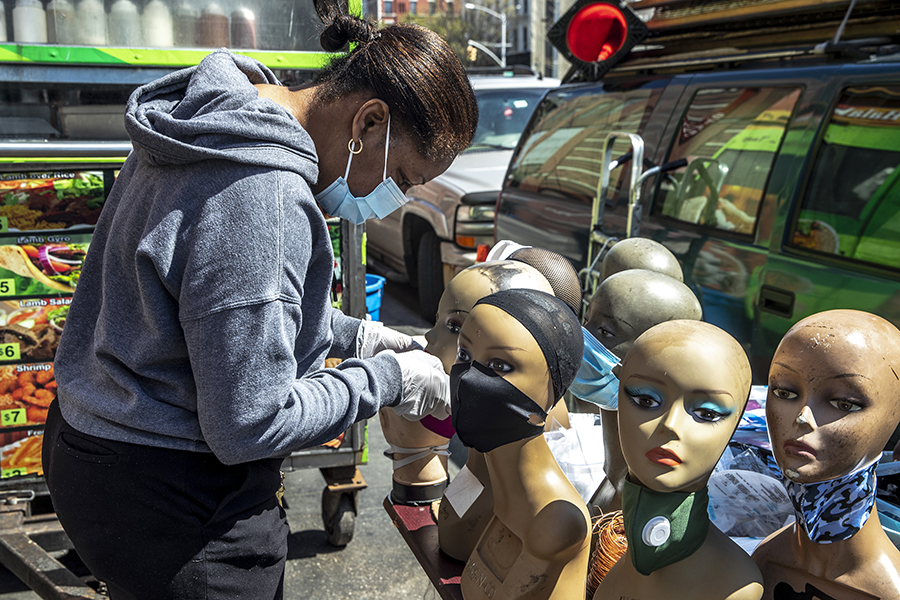 A face mask vendor in West Harlem in Manhattan on Thursday, April 16, 2020. As people with no symptoms are potentially spreading the coronavirus, some studies suggest, it may be time to give face masks the kind of advertising and promotion that support condoms as lifesavers. (Brittainy Newman/The New York Times)

Are face masks going to become like condoms — ubiquitous, sometimes fashionable, promoted with public service announcements? They should be, one virus researcher says, if early indications are correct in suggesting that COVID-19 is often spread by people who feel healthy and show no symptoms. David O’Connor, who studies viral disease at the University of Wisconsin-Madison, said, “If a substantial amount of transmission occurs before people feel sick, how do you stop that? By the time people feel sick and seek care, all the testing and isolation in the world would be too little, too late.” O’Connor, who researches HIV and other viruses, including the new coronavirus, said some recent research had shifted his thinking about the current pandemic. “HIV is also spread while people feel fine,” he wrote in an email, “and consistent, correct condom use is a barrier to sexual virus transmission that works.” “Face masks are a barrier method that might also need to be worn consistently and correctly to prevent transmission of this virus,” O’Connor added. He said it was time to “normalize face masks, and fast.” “Kids are going to need to wear them to school when classes resume,” O’Connor said. “Adults are going to need to wear them to work. If you want to go to a basketball game, when we get to that point, face mask. They need to be as ubiquitous as Kleenex, as quickly as possible.” And they should probably be fashionable as well, he said, with celebrities promoting them. He suggested LeBron James. The NBA may have been thinking in the same direction because it announced Friday that it was joining in the production of NBA-, WNBA- and team-branded face masks. Two of the papers that prompted O’Connor’s thoughts on masks and condoms came out in the past week. One, in Nature Medicine, estimated that viral shedding — when people are spreading active viruses by breathing or coughing or sneezing — began two to three days before the onset of any symptoms. In another paper, which went online Friday in the journal Science, researchers reported that crab-eating macaques were susceptible to infection by the new coronavirus and that they appeared to be shedding the virus from their bodies almost as soon as they were infected. The monkeys never developed visible symptoms, but the virus was detectable, and the monkeys’ lungs showed damage consistent with a COVID-19-like disease. Barry Rockx, of Erasmus University Medical Center in the Netherlands, one of the authors of the Science paper, said that the research showed the monkeys would be useful in testing treatments and vaccines. Also, he said, “It looks like the peak of shedding occurs very early on.” If that is also true in humans, as the Nature Medicine paper found, “that could potentially explain why this virus is spreading so rapidly throughout the population,” Rockx said. Social distancing for everyone helps with that problem, as would masks, which could benefit from the kind of innovation and promotion applied to condoms, O’Connor wrote in the email. He said, “And just like there needed to be sex-positive, nonstigmatizing marketing to increase condom uptake to fight HIV, similar efforts will need to be taken to galvanize people to make mask wearing cool and essential. (Designer face masks? More comfortable face masks?)” That’s happening too. One thing he didn’t mention, which could be the ultimate bestseller and which did not appear to be for sale in several internet searches: the Fauci face mask. There is a lot of merchandise available with the face of Dr. Anthony Fauci, the federal government’s top infectious disease expert, but what about a face mask with his face? Come on, interweb marketing forces, the nation needs you, now!