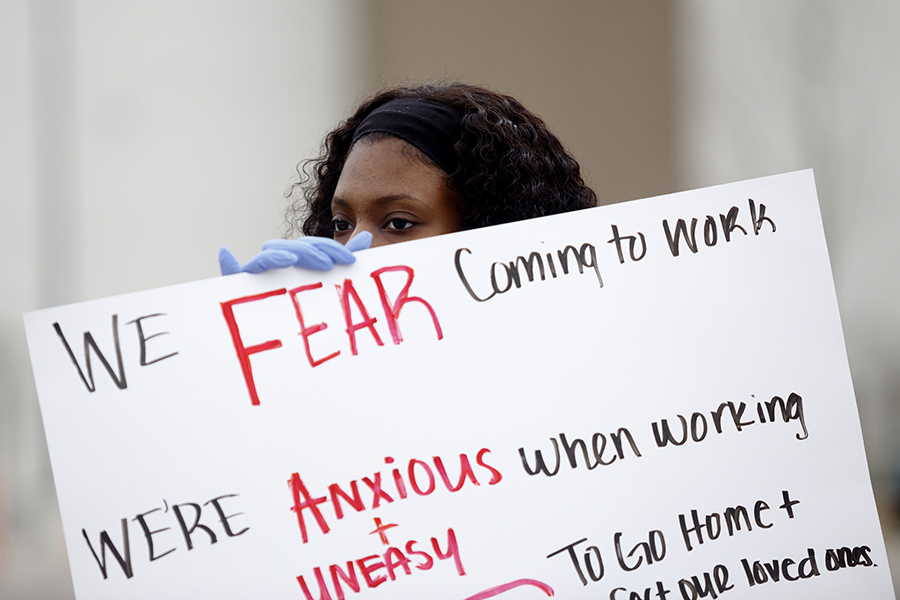 Amazon employee, Brela Flemming, 20, of Redford, holds a sign alongside her coworkers while on strike, Wednesday, April 1, 2020, outside an Amazon Fulfillment Center in Romulus, Mich., Wednesday, April 1, 2020. Amazon, which has come under fire from employees and politicians for not taking sufficient steps to protect workers on the job during the coronavirus pandemic, said it would ramp up safety efforts.
Image: Elaine Cromie/The New York Times

Stocks were modestly lower in midday Asian trading Friday, setting the stage for a downbeat end to a turbulent week in financial markets.

Australian shares were down more than 1%, pacing the declines. Futures markets suggested Europe and Wall Street would open lower as well.

Wall Street stocks jumped Thursday after President Donald Trump suggested Saudi Arabia and Russia would call a truce in their clash over oil prices and would cut production. While plentiful oil supplies and low fuel prices are generally positive for the global economy, the clash over prices came at a time of declining demand as the response to the coronavirus outbreak slowed economic activity around the world. Plunging oil prices threatened to destabilize countries and regions where the local economy depends on oil production.

Oil prices surged Thursday after Trump’s comments sparked a rally, but they gave up some of those gains in Asian trading Friday. Bond prices rose, as investors sought to put their money in investments generally considered safe.

Oil prices surged Thursday, setting off a rally in shares of energy companies, after Trump said that he expected that Saudi Arabia and Russia would substantially cut their oil production to halt the collapse of prices.

Crude oil futures, which had already been climbing Thursday, surged and shares of oil and gas companies rallied. West Texas Intermediate, the U.S. crude bench mark, rose about 25%, and Occidental Petroleum was the best-performing stock in the S&P 500, with a gain of about 19%. Apache rose nearly 17%, and Halliburton gained more than 13%.

The rally bolstered the stock market, with the S&P 500 ending the day up more than 2%.

Oil prices had been hammered as the coronavirus pandemic all but eliminated travel and damped demand for energy. A price war that broke out between Saudi Arabia and Russia last month intensified the decline. After the countries failed to reach a deal on production cuts, both instead increased output in an effort to gain market share.

The combination of slumping demand and the contest between two of the world’s largest oil producers had pushed crude oil prices down by 55% in March alone, wreaking havoc on the energy industry, with oil companies slashing budgets, and refineries cutting production of gasoline, diesel and jet fuel.

The possibility of some relief to the industry was also welcomed by stock investors looking for some good news. Earlier Thursday, a report on jobless claims showed that 6.6 million Americans filed for unemployment benefits last week in the latest sign of the economic damage wrought by the coronavirus pandemic.

The monthly jobs report Friday is expected to end almost a decade of gains.

Another measurement of the economic devastation wrought by the coronavirus pandemic across the United States will be coming Friday. It may not be a big number, but it is likely to be a milestone.

The figure, from the Labor Department’s employment report for March, is expected to show a net loss of jobs for the first time since late 2010. The data was mostly collected in the first half of the month, before the wave of business closings and layoffs that have led to nearly 10 million new unemployment claims in the past two weeks.

Economists on Wall Street are looking for the report to show a loss of 100,000 jobs, with a rise in the unemployment rate to 3.8% from a half-century low of 3.5% in February.

But double-digit figures for joblessness may be coming soon. The Congressional Budget Office said Thursday that it expected unemployment to top 10% for the second quarter of 2020 — as high as the peak in the last recession — and to remain at 9% at the end of 2021.

Before the pandemic upended normal commerce, the economy had created jobs for 113 months in a row, more than twice the previous record. In that time, a net total of 22.2 million jobs were created in a steady if not always spectacular expansion.

Pressure builds on Congress to do more to help workers and businesses.

The Labor Department’s report Thursday that 6.6 million Americans filed claims for unemployment benefits last week only increases the pressure on Trump and members of Congress to ready another package to further aid workers and businesses through the coronavirus crisis.

The $2.2 trillion package that Trump signed into law last week includes enhanced benefits for unemployed workers for up to four months, along with aid for large and small businesses and direct payments to millions of individuals, as the country struggles through a shutdown of economic activity meant to slow the spread of the virus.

Many economists have warned that the $350 billion included in that most recent package for aid to small businesses will not prove sufficient to help all of the companies that might otherwise go under during the shutdowns.

R. Glenn Hubbard, a Columbia University economist and former adviser to President George W. Bush, said that the necessary assistance was likely to be “closer to $1 trillion,” which would require another $650 billion appropriation from Congress.

Democrats, including Speaker Nancy Pelosi, D-Calif., have pushed for additional payments to reach more Americans, to help people continue to pay their bills through the crisis. Sen. Sherrod Brown, D-Ohio, has called for federally funded “hazard pay” for doctors, nurses, grocery store clerks, postal carriers and other workers on the front lines of the virus.

Trump and Democratic leaders have also called for a sweeping investment in infrastructure, like broadband expansion and bridge repair, that could put millions of Americans to work once the crisis abates. Republican leaders in the House and Senate have shown less enthusiasm for many of those ideas.

Amazon says it will improve worker safety after criticism.

Amazon, which has come under fire from employees and politicians for not taking sufficient steps to protect workers on the job during the pandemic, said it would ramp up safety efforts.

The company said in a blog post Thursday that temperature checks, which it began at certain facilities Sunday, were likely to be put in place across all of its U.S. and European facilities and Whole Foods stores by early next week and that it was already checking the temperatures of more than 100,000 workers each day. Anyone with a fever of more than 100.4 degrees is sent home and asked to stay home until they are free of fever for three days, the company said.

The company also said it was in the process of procuring more hand sanitizer and disinfectant wipes for workers and that it was beginning to distribute millions of masks to workers.

Workers who learned they had contracted the coronavirus or presumed they had but were unable to get tested could receive extra paid time off, and any worker who had contact with a person with the illness would receive 14 days of paid leave, Amazon said.

Amazon also said that it had already hired 80,000 of the 100,000 new workers it had pledged to hire in mid-March to keep up with recent demand.

Delta to let employees stay at home if they are worried about the coronavirus.

Delta Air Lines told employees that it would allow flight attendants, baggage handlers, gate agents and other so-called front-line employees who were concerned about the coronavirus to stay home and still get paid.

Any employee concerned for their safety would be allowed to take voluntary leave and continue to be paid “in some form,” according to an internal memo to managers that was viewed by The New York Times. Managers, who are referred to as “leaders” at Delta, were also instructed not to question the employees about whether they were personally at higher risk and were told to share guidance from the Centers for Disease Control and Prevention on high-risk factors associated with the virus.

“This is the right thing to do for our people who may be part of a high-risk group based on the latest CDC guidance,” the airline said in a statement to The Times.

Separately, International Airlines Group, which operates British Airways, Iberia and other airlines, said Thursday it was slashing its schedule by 90% in April and May. And British Airways said it had reached an agreement in which each of its 4,000 pilots would take four weeks of unpaid leave over the next two months.

Here’s what else is going on.

— Ford Motor Co. said Thursday that first-quarter sales of new vehicles fell 12% because of a steep drop in the second half of March.

— Boeing’s chief executive, Dave Calhoun, announced voluntary layoffs in a note to staff Thursday, with details on eligibility and benefits to come in three to four weeks. “We’re in uncharted waters,” he said, adding that the layoffs would provide a bridge to recovery, provided “we’re not confronted with more unexpected challenges.”