Roger Federer is whacking shots off a blackboard in the snow; Rafael Nadal is apparently spending some of his time on a treadmill. Athletes, they are (kind of) just like us 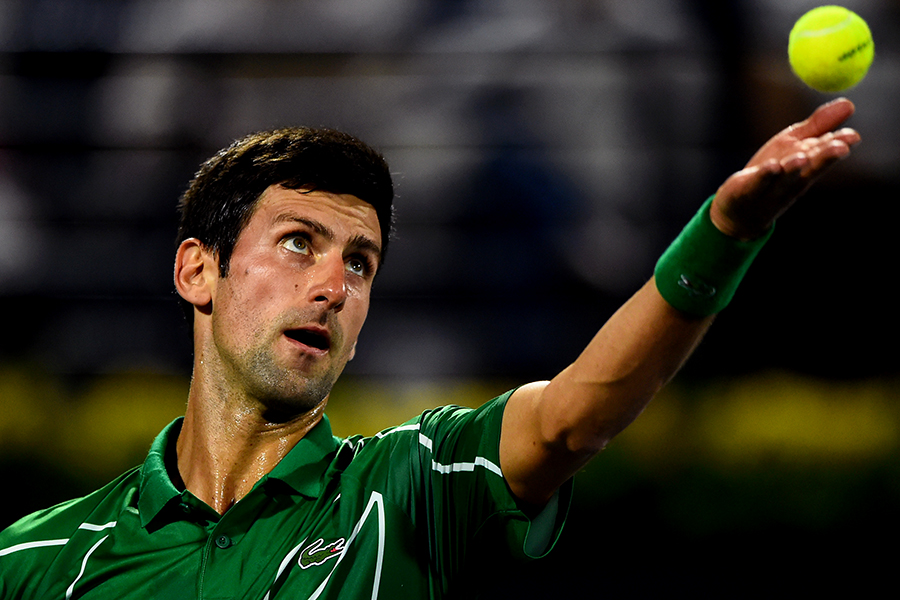 As cancellations reach deeper into the summer, it is becoming clearer that some sports leagues will never finish their seasons. That leaves the thorny question of how to resolve those competitions. Belgian soccer is one of the first to make up its mind: The league season was canceled Thursday, and Club Brugge, which had a 15-point lead with 11 games to play, was unceremoniously declared the winner. English rugby still has hopes of finishing its top division, but it called off all lower divisions Thursday and declared Newcastle the second-tier champion, earning it promotion. Those decisions may have been relatively easy, since Brugge and Newcastle were miles ahead. That’s maybe a good sign for Liverpool, which leads the English Premier League by 25 points with nine games to play, seeking its first title since 1990. But there are much trickier problems to resolve should more leagues end their seasons early. Consider relegation from the Premier League, which can bring a massive financial penalty. Aston Villa currently sits in a relegation place by 2 points. But the team has played one fewer game than the other relegation candidates, which Hammers fans would certainly consider unfair. If they were to win that (hypothetical) game, they would be out of the relegation zone. And what will happen with leagues like the NHL and NBA that have playoffs? It seems likely that if they do not resume their seasons, they will emulate baseball in 1994 and the NHL in 2005, two seasons that were ended by labor disputes and officially have no champion teams. In contrast, Brescia, which sits in last place in Serie A in Italy, doesn’t seem too concerned about relegation. The team’s president, Massimo Cellino, told Gazzetta dello Sport: “This season doesn’t make sense anymore. For me, going back to business is pure madness. If they force us to, I am ready to not line up the team and lose the games, 3-0, by default, out of respect for the citizens of Brescia and their loved ones who are no longer there.” Novak Djokovic ft. Frying Pans Competition never stops 💪🏼😂 #tennisathome🎾🏠 Такмичење није престало 😂 Saddened by the cancellation of Wimbledon? Missing the Big 3 of men’s tennis? Well, they are all still out there, and offering glimpses of what’s going on with their lives. For Roger Federer, it’s whacking shots off a backboard, between his legs and behind his back. In the snow. (He’s in Switzerland, after all.) He followed up with a second video that provides a wall’s eye view. For Novak Djokovic, it’s a makeshift game of tennis in a living room with frying pans as the rackets. He and his brother Marko get a pretty good rally going. Rafael Nadal is apparently spending some of his time on a treadmill, and offered greetings in Spanish. “It’s difficult times, but we’re getting there,” he said. And outside of tennis, we also get to see Jose Mourinho on a stationary bicycle. Athletes, they are (kind of) just like us.

Another glimpse into the stay at home practice routine 🧤🧣🎾👊 I hope everyone is safe and healthy. Stay positive. Keep active. Support one another. We will get through this together🙏 #stayhome   On Enes Kanter’s Menu: Menemen With the NBA season on hold, Enes Kanter, a center for the Boston Celtics, is taking his talents to the kitchen to cook up some traditional Turkish dishes. “We complain a lot about how we don’t have no time,” he said in a video posted to his Twitter account. “Around this time, I’m trying to educate myself.” Kanter cooked three dishes: menemen, a dish with egg, tomatoes and green peppers; borek, a pastry made from thin, flaky dough; and cay tea. “Every Turkish person drinks the Turkish tea,” he said. “It actually makes the breakfast so much better and tastier.” Kanter isn’t the only athlete spending more time in the kitchen. New York Mets first baseman Pete Alonso, who has a passion for cooking, said he has been firing up the grill more. “Cooking during the season is not really that feasible, because we’re just at the yard all the time — waking up, working out, doing our routine,” Alonso said on Instagram Live with Alex Rodriguez. “But for me, I really take joy in cooking.” Alonso, who hunts and fishes in the offseason, mainly cooks meat. He considers himself a well-rounded chef and said that he was also pretty handy with vegetables and side dishes. He did admit one weakness: desserts. — Danielle Allentuck

Tweets by @forbes_india
Covid-19 or common cold? How to tell the difference
Inside Kim Kardashian's Prison-Reform Machine