Isolation and anxiety from Covid-19 is underscoring the fact that India is under-equipped to handle psychological care to the scale that it needs, pandemic or otherwise 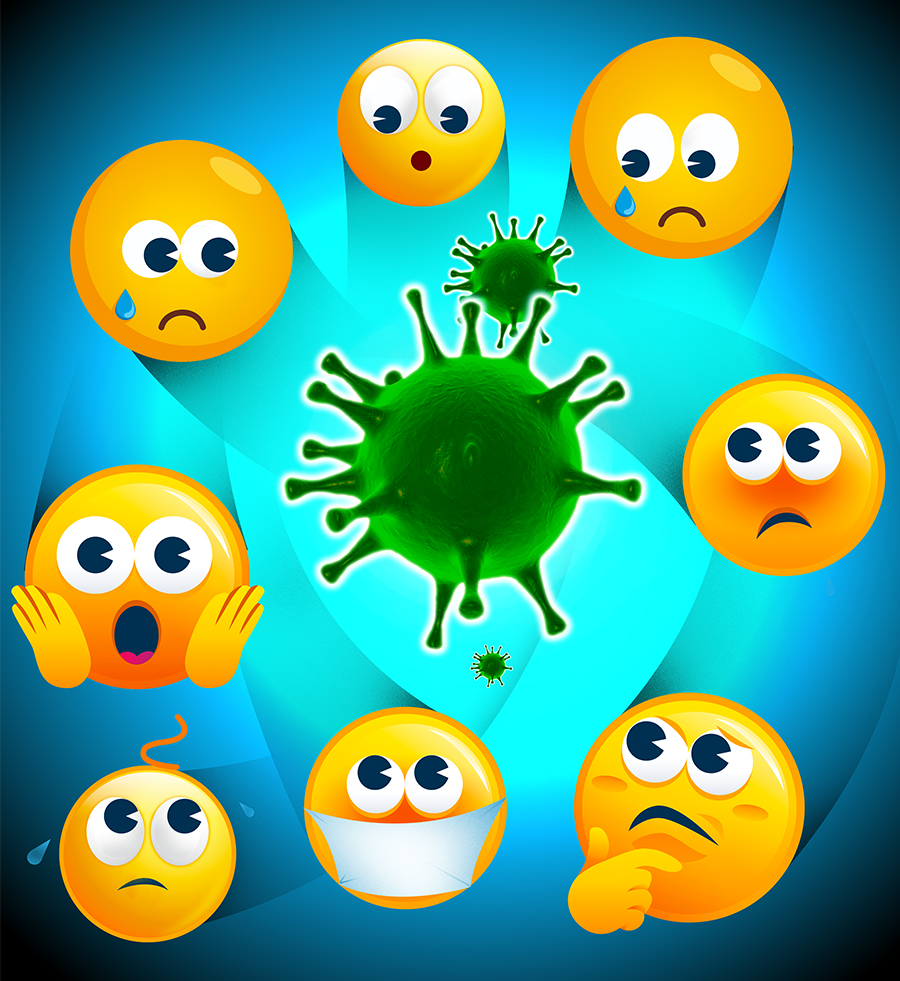 Synthia (name changed), 21, a student of fine arts in Bengaluru, washes her hands at least 100 times on a regular day because of an obsessive compulsive disorder (OCD) about maintaining personal hygiene. The progress she had made with counsellors to reduce the tendency was not only undone, but also intensified due to the Covid-19 outbreak. Similarly, Santosh (name changed), 32, a textile entrepreneur in Bengaluru, successfully managed to keep his illness anxiety disorder at bay for a year. He had a tendency to believe that even minor symptoms were signs of severe illnesses. As lockdown measures were being put in place to contain the spread of the pandemic, he found himself frantically reaching out to his psychiatrist, fearing he had contracted the virus. “He said his heart was racing and he was feeling uneasy in the chest. He also wanted to see a cardiologist. That was an anxiety relapse,” says Vinod Kumar, the psychiatrist who heads MPower - The Centre in Bengaluru, who is treating him and Synthia. “Stress levels are hitting the roof for most of us because all our best-laid plans are out of the window with the 21-day lockdown. The spread of misinformation, fear mongering and general doomsday attitude that many people are carrying not only trigger anxiety, but may also exaggerate symptoms in those with pre-existing mental health conditions.” According to the last National Mental Health Survey conducted by the National Institute of Mental Health and Neuro Sciences (Nimhans) in 2016, one in 20 people in India suffers from depression, while the treatment gap could be as high as 88 percent. The reasons could range from lack of trained professionals, low awareness or limited access to health care services to stigma around mental health issues.
The Covid-19 pandemic and social distancing protocols are ushering in a new culture of work, with businesses scrambling to ensure continuity as employees work from home amid unprecedented economic damage. Experts believe isolation as well as difficulties in coping with day-to-day challenges can disturb the normal sense of control individuals experience in daily life.
“Loss of one’s routine in day-to-day life also adds to a sense of unease and increases the risk of brooding,” says Dr Seema Mehrotra, professor of clinical psychology at Nimhans. She says that the pandemic has increased the need for use of remote approaches such as telephonic and online means of providing psychological help. "Clients who have been using mental health services and professional providing psychological services through face-to-face interactions have to get used to new means of professional connect in the current context, while keeping in view ethical guidelines for such services." Surge in Consultations
In March, technology platforms that provide counselling services saw a spike in anxiety-induced calls and queries. The average increase ranges between 15 percent and 30 percent, according to estimates by the professionals Forbes India spoke to. Students, startup founders, working professionals practising social isolation as well as housewives are all seeking help. Mental health startup YourDost saw about 150 people logging on to the platform in the last three weeks, most of them triggered by different levels of anxiety. “The uncertainty of not knowing what’s next and how it’ll affect our lives is causing the maximum damage,” says Puneet Manuja, co-founder, YourDost, adding that people are most concerned about access of essentials and navigating the new checks and balances issued by the government, apart from job security. Social distancing is causing loneliness, he says, while a digital overload of news on the pandemic increases fear and stress levels. “People are realising that the coronavirus might introduce long-term changes in their jobs and work styles, and they might have to keep up or increase productivity despite all the challenges. This heightens anxiety,” says Manuja. 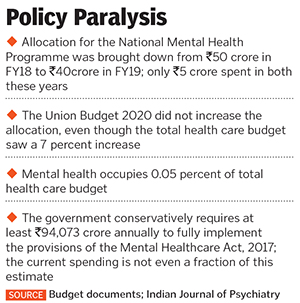 As of April 1, there were over 1,600 confirmed coronavirus cases in India with the death toll standing at 38. Migrant labourers left jobless by the lockdown were walking thousands of kilometres back to their villages, struggling for food, water and shelter along the way. Health workers, on the other hand, are battling crumbling infrastructure and shortage of protective gear as cases surge. These developments have resulted in many people worrying about an impending apocalypse in all seriousness, says Dr Hema Tharoor, a senior psychiatrist from Chennai with over 23 years of experience. She gets at least three patient referrals from other doctors every day, of people with no previous history of mental health complications, but those who are developing them due to the pandemic. “We had a patient with an illness phobia who got himself tested and then refused to leave the hospital because he thought it was a safe space where he could avoid the virus,” says Tharoor, who now conducts all treatments via tele-consultation. Senior citizens—who are more vulnerable to the infection—are particularly worried. Sociald istancing comes with its own set of challenges for the elderly. As per the 2011 Census, India has about 104 million (53 million women and 51 million men) people aged above 60. About 71 percent of this population lives in rural areas. A 2018 survey conducted by non-profit HelpAge India indicates that 10-20 percent of all senior citizens in India suffer from loneliness, while 6 percent lives alone. “A lot of mental health disorders among the elderly are undiagnosed, and often masked under loneliness. And if an elderly person suffers from cognitive decline, something as simple as a disruption 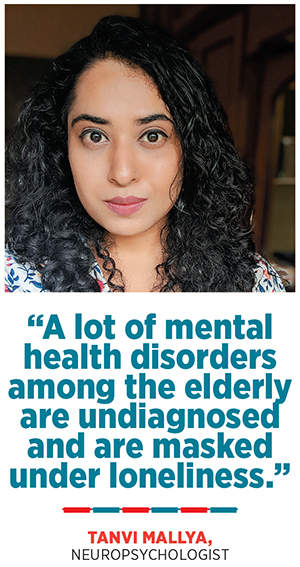 of their daily routine can trigger various symptoms,” says neuropsychologist Tanvi Mallya, who runs a venture that provides at-home mental health services to the elderly. In March, about 60 percent of Mallya’s 100-odd clients in Mumbai expressed anxiety over the coronavirus. As she transitions her therapy sessions online, Mallya says families and caregivers must maintain normal routines for elders. “Many senior citizens derive their sense of time based on the activities they do throughout the day. Their orientation in terms of place comes from where they live,” she explains. “If their schedule is disrupted or if they are moved out of their homes to other places during the lockdown, their orientation might go for a toss. This might have mental implications that are difficult to recover from.” Mallya adds that families must also be careful to not be alarmist when they communicate with elders about the virus and safety precautions. Juhi Dhawan’s 72-year-old mother lives by herself in South Mumbai and does not like stepping out of the house. Her memory has been deteriorating over the last 3-4 years. Dhawan (name changed) had populated her mother’s daily routine with visits from therapists, acupuncture specialists and domestic staff who would keep her engaged. “She is not comfortable staying with me and it makes me anxious that she is alone now,” says Dhawan. “I keep calling her at regular intervals, talking to her casually about hygiene and sanitation. We’re trying to shift her therapy sessions online so that there is no major change in her schedule. During therapy, she is also encouraged to call friends and family, so that she feels connected.” Building infrastructure
Government officials are waking up to the need to provide mental health support during the pandemic. On March 29, in collaboration with Nimhans, the Union health ministry launched a toll-free helpline number (080 46110007) for people facing mental health issues during the lockdown. This development came on the heels of the Kerala government announcing that 375 members will provide counselling support to families of individuals exhibiting coronavirus symptoms. According to Mehrotra of Nimhans, strengthening the supply side means “improving the quantum of human resources through innovating approaches and larger-scale training, use of well-designed and professionally-assisted platforms, and on the whole, focusing on various levels of interventions for individuals with varying needs”. Bridging the gap between people and mental health experts is the need of the hour. According to a January 2019 report in the Indian Journal of Psychiatry, authored by Kabir Garg, C Naveen Kumar and Prabha S Chandra, India is estimated to have roughly 9,000 psychiatrists. This translates to 1 psychiatrist per 100,000 people, which is below the global standard of 3 psychiatrists per 100,000 people. Mental health occupies about 0.05 percent of the total health care budget, with a ₹40 crore budgetary allocation to the National Mental Health Programme. This amount has seen no increase in the last two years, and actual money spent on-ground is just around ₹5 crore. 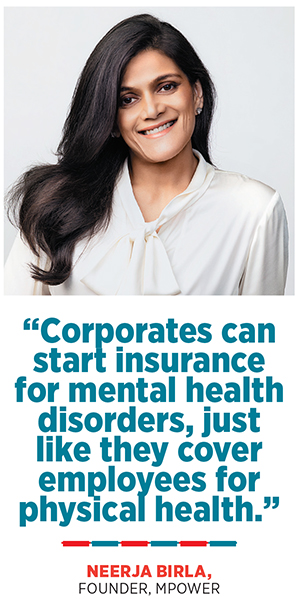 “Right now, a helpline is the best way to build capacity, scale up to cater to a large number of people without anyone having to step out of their homes,” says Neerja Birla, founder of MPower. The mental health organisation is under the process of launching its own helpline to cater to people undergoing anxiety, depression or other issues during the pandemic. It has also been using social media to make people aware of the symptoms. Apart from logistical barriers, professionals are also working to help people overcome social barriers and stigma, which include not identifying or disclosing mental health issues, and insufficient awareness about how professional help is different from friendly advice. A team at Nimhans, for instance, is collaborating with the Microsoft Research India and International Institute of Information Technology teams to develop an app that will help people overcome the hesitation to seek professional help for common mental health concerns. The app is under development and is likely to be ready for launch by year-end. Birla believes that corporates could be a starting point to make conversations around mental health more mainstream, and now would be a good a time to do that as the nature and future of work seem to be shifting. “Companies can introduce insurance for mental health-related disorders, just like they cover employees for physical health. That’s a great way to start a larger policy change,” she says. For employees struggling with social isolation, Dr Rohann Bokdawala, specialty medical consultant at Sewri TB Hospital, recommends that people “boost virtual socialising, speak with family and friends more frequently, and cultivate an indoor hobby”. Every day, Bokdawala sees at least four patients who, without any prior medical history, are suffering from mental health complications. Manuja of YourDost warns against over-addiction to content consumption, including news, social media and OTT platforms. “Usually, it is counterproductive, with people doing nothing but staring blankly at the screen. That impacts productivity,” he says. Self-care is a priority, Mehrotra says, and at the same time, one must mobilise all possible support in times of need. “While the public needs to be sensitised about empathising with persons who are dealing with mental health challenges, seeking help needs to be viewed as a sign of strength and courage and an act of responsibility to oneself, our dear ones and society in general.” ● With additional inputs from Namrata Sahoo

Tweets by @forbes_india
Ricky Aranda wants you to reframe your ideas about work
Covid-19 or common cold? How to tell the difference