The delivery workers who risk their health to bring you food

Beside risking their own health, workers typically earn meager salaries and have no health insurance or any other labour protections 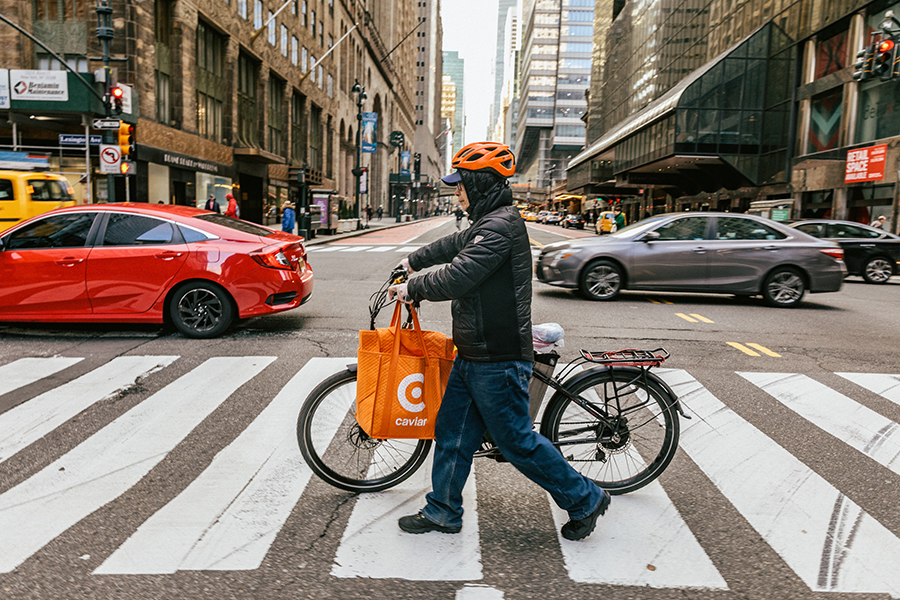 A delivery worker walks hs bike across a street in New York on March 17, 2020. With demand for deliveries surging, a largely immigrant work force has become a critical link, providing food, groceries, medication and many other items that many people can no longer easily access or are unwilling to go out and purchase.
Image: Bryan Banducci/The New York Times

NEW YORK — Chen Wei’s wife begged him to stop making restaurant deliveries because she feared he might contract the coronavirus from a customer.

Lee Mengba, another delivery worker, wondered if the hand that reached out for the bag of medication from behind an apartment door on a recent run belonged to a quarantined patient.

Adolfo Garcia tries to deliver pizza “in four seconds,” sometimes leaving boxes near the elevator on the first floor of apartment buildings for customers to grab. He disinfects his hands after each delivery — so often that his skin is dry and cracked.

As New Yorkers barricade themselves in their homes to practice “social distancing,” delivery workers, typically an overlooked group, have now taken on outsized significance and are on the front lines of the outbreak.

With demand for deliveries surging, a largely immigrant workforce has become a critical link, providing food, groceries, medication and many other items that many people can no longer easily access or are unwilling to go out and purchase.

Beside risking their own health, workers typically earn meager salaries and have no health insurance or any other labor protections.

Their predicament was reflected in a recent group chat among Chinese delivery workers, who weighed the risks of working and getting sick.

“You can make money anytime, but without a healthy body, nothing exists,” wrote one. “Besides, the money you earn won’t be enough to cover medical bills if you get sick,” he added.

“I’m afraid to make deliveries because I’m afraid to die,” fretted another. “America,” texted a third, “is not easy.”

Demand for delivery is on the rise across the country since the outbreak, according to analysts, with grocery apps like Walmart Grocery and Shipt recording major spikes in downloads.

Amazon announced this week that it would hire 100,000 additional warehouse and delivery workers to meet the soaring demand. A spokeswoman said the company was filling 4,000 positions in New York state, the majority of them in New York City.

On Tuesday, in the West Village, about 60 delivery workers were gathered on a street lined with restaurants, waiting to take orders that arrived about every two minutes.

Aside from food, orders for alcohol were also on the rise, said Enrique Sanchez, who manages a liquor shop in the Hell’s Kitchen neighborhood in Manhattan. “People don’t want to come out,’’ he said. “We usually sell a lot of wine, but now people want spirits, too,” he said.

DoorDash and Uber Eats, two major food delivery companies, said they would provide up to 14 days of financial assistance to any of their workers who are diagnosed with coronavirus and have to self-quarantine.

DoorDash is also providing hand sanitizers and gloves for its workers.

Instacart, a grocery delivery start up, rolled out a new feature called “Leave at My Door Delivery,” which gives customers the option to have an order left at their door during a designated time frame instead of having an in-person handoff.

Still, many delivery workers said all they have received from restaurants or delivery companies were words of caution: If you feel sick, stay home.

“There is no precaution. It’s a risky job,” said Alexis Dabire, a delivery worker in Manhattan who regularly talks with his wife in Burkina Faso over FaceTime to assure her that he is well. “They have never given us anything for protection except for words.”

Jing Wang, an organizer of the Biking Public Project, an advocacy group for delivery workers, said they were a particularly vulnerable workforce with no collective power, and they have no choice but to continue working even as so many others are staying home.

“They’re on their own,” Wang said. “Their protection is self-provided. They’ve bought gloves, face masks, because some of their employers, including the apps, haven’t provided them with any.”

To help ease the burden somewhat, Mayor Bill de Blasio said this week that the police would suspend the ticketing of delivery workers who use electric bikes, which are illegal in the city, because the workers were providing a crucial service.

Ydanis Rodriguez, a city councilman and chairman of the council’s transportation committee, had pressed the mayor on the issue.

“As the city shuts down schools, and prepares to limit all restaurants, bars and cafes to takeout and delivery, it is no secret that most who will be preparing and delivering meals will be immigrants,” Rodriguez wrote.

“We must provide them and their families with the certainty that the NYPD will not use this moment as an opportunity to crack down on the technology they are using to keep us fed,” he added.

Chen had been delivering food for Red House, a Chinese restaurant in Manhattan, for eight months when the outbreak struck.

His wife pleaded with him to stop working, worried that he could endanger the health of their two children. His biggest fear, he said, was elevators, “a small space with so many people it doesn’t matter what kind of ventilation it has.”

He finally resigned last weekend, telling the owner of the restaurant, Lin Kai, that he couldn’t work for him anymore. “I told him I understood,” Lin said. “We’re all a little nervous. It’s a period of high anxiety.”

Though some workers like Chen have decided not to risk their health at the expense of lost income, others like Ashikur Rahman said he cannot afford to stay home.

“So many people are scared, and I am, too. But I need the money,” he said, as he cycled over the Williamsburg Bridge from Manhattan into Brooklyn for the third time on a recent day.

He was carting five cases of beer, one of several beer runs. “I’m delivering so much beer, it’s crazy. And they’re so heavy, too,” he said wearily.

Like Rahman, Lee, who arrived to the United States in 2011 from Shanghai, has had to weigh his options.

There’s no way to know who is infected, he said. “You don’t know where these people are. They could be anywhere.” At the same time, he doesn’t have health insurance. “If I get sick, I have to stay at home. How do I pay rent? I don’t have any other income. If I don’t work, there’s just no income.”

On a recent run from a Vietnamese restaurant in SoHo to an apartment building in the West Village, he was approached in the lobby by a woman holding a bag from a CVS pharmacy, he said. “Would you deliver this for me?” she asked him. It was for a friend who lived in the building, she said, but didn’t want to go herself.

Lee said he hesitated. But he had on a fresh pair of disposable gloves, so he figured it was safe. Then, the woman handed him a $50 bill. No need for change, she said.

After completing his food delivery on the second floor, he continued on to the fifth floor, to apartment 5Y, to drop off the bag of medication. As he turned to leave, he caught the silhouette of a young man picking up the bag. No words were exchanged, he said.

As he left the building, Lee immediately disposed of his gloves in a nearby garbage can. He decided that would be his last delivery for the day.

“That’s enough,” he said he thought to himself.

Tweets by @forbes_india
Hit by coronavirus, airlines fight it out in turbulent skies
With zero new domestic Coronavirus cases, China inches towards normalcy